Time To Dance Goes Wire-to-Wire To Win At Woodstock 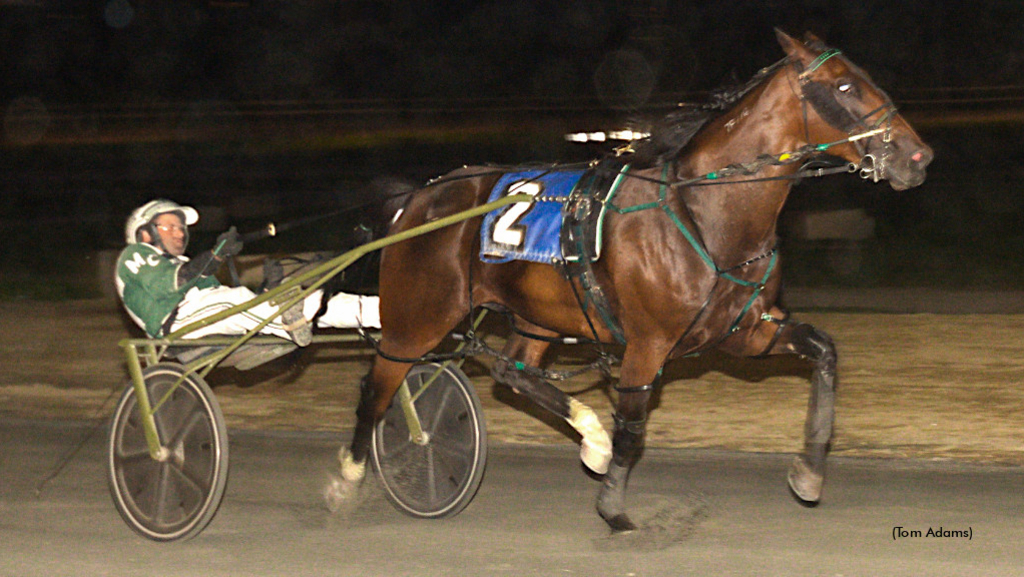 Driver-trainer Marc Campbell sent out Time To Dance from Post 2, and the Maritime free-for-all standout took control by turning in fractions of :29, :59 and 1:28.4. Beachin Lindy (Stephen Charlton) following behind the race favourite through three quarters.

Time to Dance headed for home and stopped the clock in 1:55.3, a two three-quarters length victory over Beachin Lindy. American Risk (Dale Spence) finished third in the five-horse field.

A six-year-old A Rocknroll Dance gelding, Time To Dance won for the second straight race and now has five victories in nine starts this year. Owned by Brent Campbell of Charlottetown, P.E.I., and Matthew McDonald of Edwards, Ont., Time To Dance is a 37-time winner in 80 outings and has accrued $187,399 in purses.

Freddie, with driver-trainer Campbell holding the lines, came up the winner in the $3,000 John H. Davies Memorial Trot Handicap with the fastest mile ever trotted in the province of New Brunswick.

The 10-year-old gelding found himself in second place in the four-horse race, as Hallofaride (John Davidson Sr.) cut opening fractions of :29.2 and :58.4.

Freddie, the odds-on choice, moved to the front of the field in a 1:29.4, and came home to win in 1:59.3 by seven lengths. Hallofaride settled for second and Marauder Seelster (Ivan Davies, the son of longtime New Brunswick horseman John H. Davies) was third.

The son of Majestic Son-Circe Hanover won for the third time in nine starts this season. Freddie, owned by the Three Wisemen Stable, has 79 career victories and $192,200 in lifetime earnings.

The time of the mile broke the near 30-year-old provincial record of West River Exotic of 1:59.4, taken at Exhibition Park Raceway in 1994. The previous track record was set 25 years ago with a 2:02 mile from trotting filly Dunmore Skye.

KCs Starlite claimed the $2,300 Clayton and Shirley Dickenson Memorial - and broke a track record in the process.

Woodmere Ideal Art, with Kyle Mason in the bike, claimed the $2,500 Winners Over Pace in 1:56.1 for trainer Sifroi Melanson and owner Ultimate Stable of Lakeburn, N.B.

I presume that we'll next see Time To Dance race in The Gold Cup And Saucer eliminations, at Charlottetown next weekend.