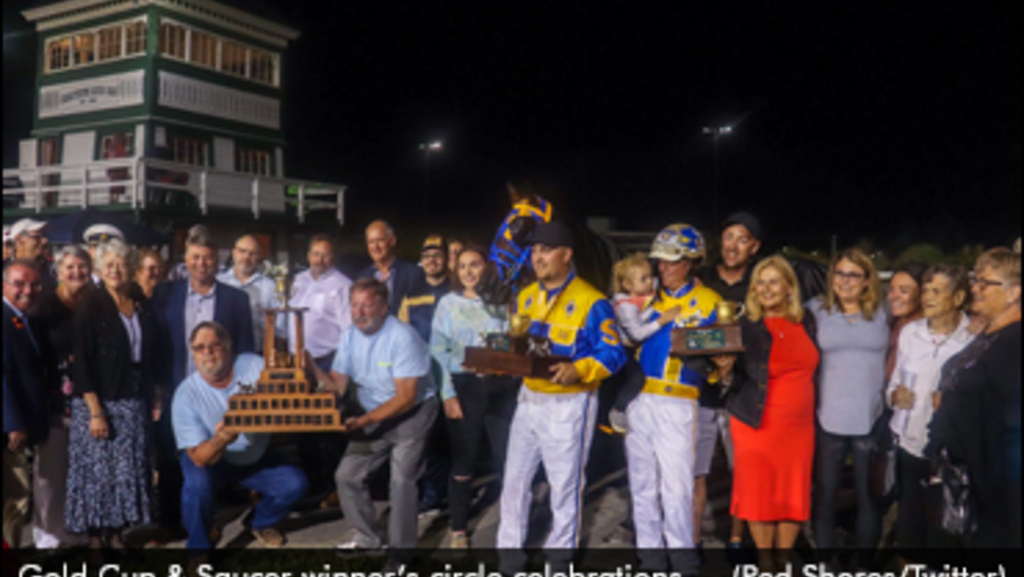 When he was just a kid, 29-year-old Patrick Shepherd and his brothers would run around the backstretch at Charlottetown Driving Park pretending they had just won Atlantic Canada’s biggest race. Back then, they were just a bunch of little boys with a big dream – but that dream became a reality this past Saturday night.

With older brother Robert driving, Patrick’s trainee Smooth Lou won the 62nd edition of the $60,000 Guardian Gold Cup & Saucer in 1:51.1 on a night they will never forget.

Walking back to the winner’s circle, Patrick and Robert were greeted by their proud father Harold and brother Steven in an emotional celebration huddle.

“It was kind of cool to share the moment with them. [At that moment], it was like, ‘the dream did come true.’ It was something we always grew up dreaming of and to be there with all of us together was pretty emotional,” Patrick told Trot Insider. “It was just nice to be there because of COVID and everything else; it was nice to celebrate with everybody.” 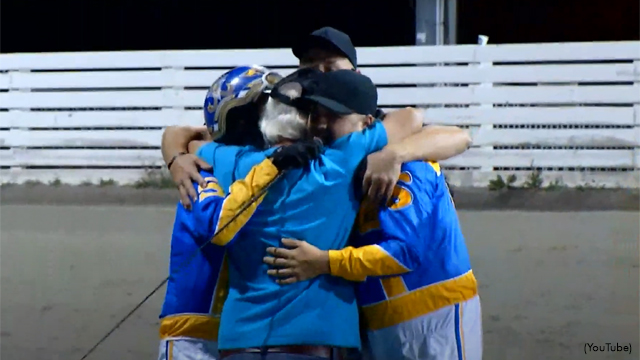 Like his brother Robert, Patrick lives and races predominantly in Ontario now but always returns to P.E.I. for Old Home Week. Last year, he was unable to attend the Gold Cup & Saucer in person for the first time in his life due to the global pandemic and COVID-19 restrictions that were in place in the region.

Having fans back in the stands and being surrounded by family and friends for the special achievement made this year’s homecoming a night to remember. 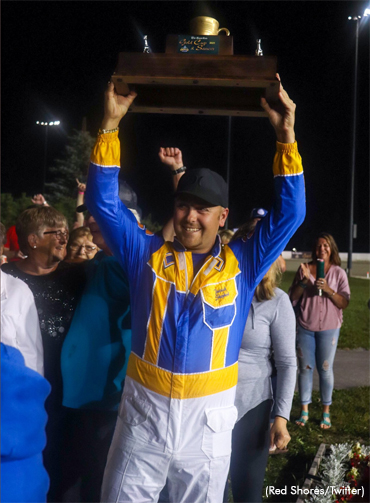 “When I held the trophy up, they were all chanting mine and Robert’s name – it was pretty cool,” said Patrick. “There was a lot of friends and family there. And the people that have reached out to me over Facebook and phone calls saying that’s probably one of the nicest things to see all our family together and win that race, it was pretty cool. That’s a whole other feeling. We win races every week here, like at Mohawk, but to have all those people around and my grandmother, she turned 94 not long ago, and to have her there and in the winner’s circle with us, that was something special.”

While it was brother Robert in the bike for the final, their cousin Jason Hughes played an important role in getting Smooth Lou there as the P.E.I.-based reinsman drove the five-year-old pacer in his trial, qualifying with a close second-place finish.

Winning the Gold Cup & Saucer is something the young trainer has pursued for many years, buying racehorses suited for the half-mile track and even winning a trial in 2019 with Sir Pugsley and watching Robert drive the Ron Matheson-trained Marymatt Hanover to a second-place finish in the 2008 final.

“The Gold Cup is always a race we wanted to win,” said Patrick. “It’s just your dream. We used to race around the backside when I was a little kid and pretend we won the Gold Cup.”

A few days removed from the big event, the dream-come-true is starting to feel more and more real every day.

“I was so hyped up to win it one of these years and then when you do it and you’re walking to winner’s circle around the first turn waiting for Robert to come back with the horse, I had a feeling come through me like, ‘I’m a little bit weak right now, is this actually really happening?’ And then, even that night, everyone was asking, ‘Oh, did you party hard?’ I’m like, ‘Not really.’ I kind of just wanted to go to bed and wake up to see if it was all really real. And then I drove back to Ontario [on Sunday] – I left at 1:30, I drove all day and all night – and you look over in the passenger seat and the Gold Cup is sitting beside you and then it really, really sinks in.”

Patrick’s pursuit for a contender this year started with the connections behind Sir Pugsley, who had finished fourth in the 2019 final and competed in this year’s consolation, finishing fifth.

“A couple years ago, we bought Sir Pugsley off Marc Reynolds and Mark Weaver and Ronnie Burke,” said Patrick. “He’s been a good horse to us; we’ve done some good with him.”

When the price for another available Burke trainee became too high in an online auction this year, Patrick reached out to those connections and they offered a short-list of other contenders for sale. After consulting with his own ownership group – Triple S Equine, Robert and Ronald Woodburn – they decided Smooth Lou was the best of the bunch and struck a deal.

Patrick admits he was a little nervous after seeing Smooth Lou race a long, first-up trip at Hoosier Park, but was pleased when he got the chance to sit behind the Sweet Lou gelding, noting, “He is a nice horse, he’s a very high-speed horse.”

“Those guys – Ron Burke, Mark Weaver and Marc Reynolds – those guys are top-notch people,” he said. “They’re pretty great to work with.”

Now back in Ontario after living up to the task of winning the historic Grand Circuit event, Smooth Lou will get a well-deserved break.

“I shipped him back with me. I wanted him to ship through the night when it was a little bit cooler and easier on him,” noted Patrick. “We’re going to turn him out for couple weeks and go from there. It’s a long haul there and a long haul back so we’re just going to let him be a horse for couple weeks and then we’ll just play it by ear and see how he comes out of everything and then go from there.”

Patrick’s stable, which is based at Baycairn Training Center, has dropped to eight horses through the pandemic.

“I’ve tried to get better quality horses,” said the career winner of more than 1,100 races. “I’ve got some nice trotters there and some nice pacers. Smooth Lou definitely makes your job a lot easier when you have horses like him.”

Congratulations guys! What an

Congratulations guys! What an emotional night, me included.