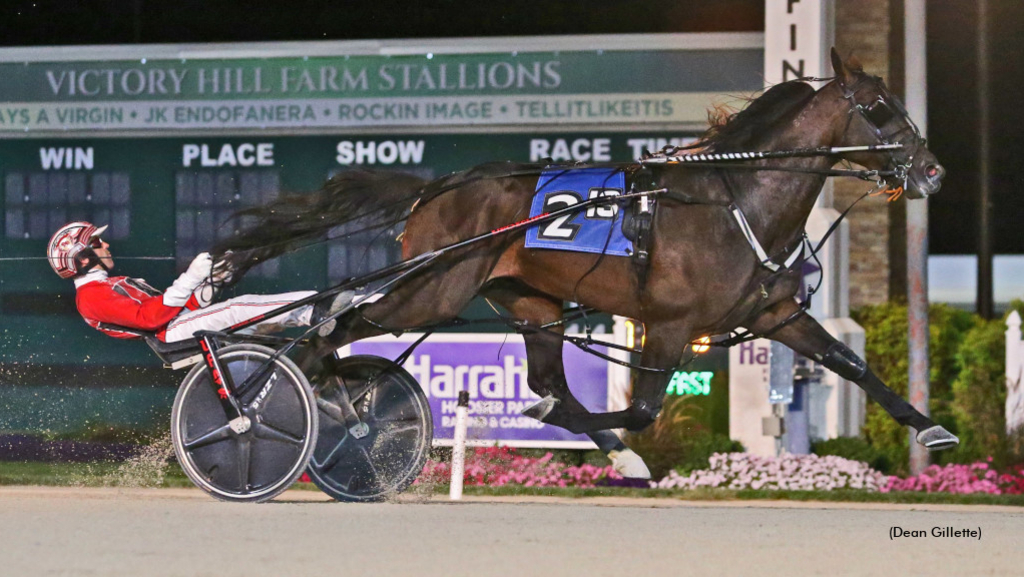 It was Bulldog Hanover’s first performance since his 1:46.4 Canadian record-setting win in the Canadian Pacing Derby. With the victory, Bulldog Hanover recorded his 10th straight victory and stamped his name in the Harrah’s Hoosier Park record books.

Leaving from post two in the talented field of 10, driver Dexter Dunn elected to take back into the fifth position waiting for the dust to settle up front as Allywag Hanover and Todd McCarthy led the hot opening quarter of :25.3. Allywag Hanover relinquished to lead to a parked and pressing Desperate Man and Trevor Henry, just before Catch The Fire launched his bid for the lead with a snarling Bulldog Hanover right on his back. Catch The Fire and Andrew McCarthy crossed over to the lead at the half in :53.2 with "The Bulldog" set to be unleashed first over heading into the final turn.

Bulldog Hanover blitzed to the lead entering the far turn and began to flex his muscle on the field, storming to three-quarters in 1:21. In the stretch, the Harrah’s Hoosier Park crowd received what they came to see, as Bulldog Hanover thundered home with a :25.3 final quarter, pacing away from an elite field of competitors by six lengths on the line to score in 1:46.3, obliterating the overall track record of 1:47.2. Allywag Hanover navigated traffic to rally up the rail to be second, Workin Ona Mystery and Dave Miller rounded out the trifecta.

“I knew there would be some leavers so with the post I thought we could sit back and let things play out early,” said driver Dexter Dunn. “We got a good tow in the opening half, then coming around the last turn I gave him a chirp and away he went.”

The 1:46.3 effort surpasses the previous track record of 1:47.2, first established by Sweet Lou in 2014 and equalled in the years since by Castle Flight, Lather Up, Little Rocket Man and Cattlewash.

“He just amazes me every time he steps on the racetrack,” said trainer and co-owner Jack Darling. “I didn’t really expect him to go this fast tonight, he just seems like the harder he gets used the better he is.”

It was the 11th victory in 12 seasonal starts for the son of Shadow Play - BJs Squall. Trained and co-owned by Jack Darling along with Brad Grant, the top-rated horse in the sport pushed his seasonal bankroll to $1,127,635. For his career, Bulldog Hanover has won 25 times in 33 lifetime starts with career earnings of $2,058,696.

Proud to be a fan of racing. Wow, I have no words to describe this victory, after a lengthy lay off, I thought he could be vulnerable in this spot but he proved me wrong again. To watch him pull away the way he did in the stretch, I'm just so glad I had the opportunity to watch it as it happened, even if it wasn't in person. So nice to see that this horse has such a big fanfare, even in the US. When a horse like this comes along it's good for horse racing as a whole.