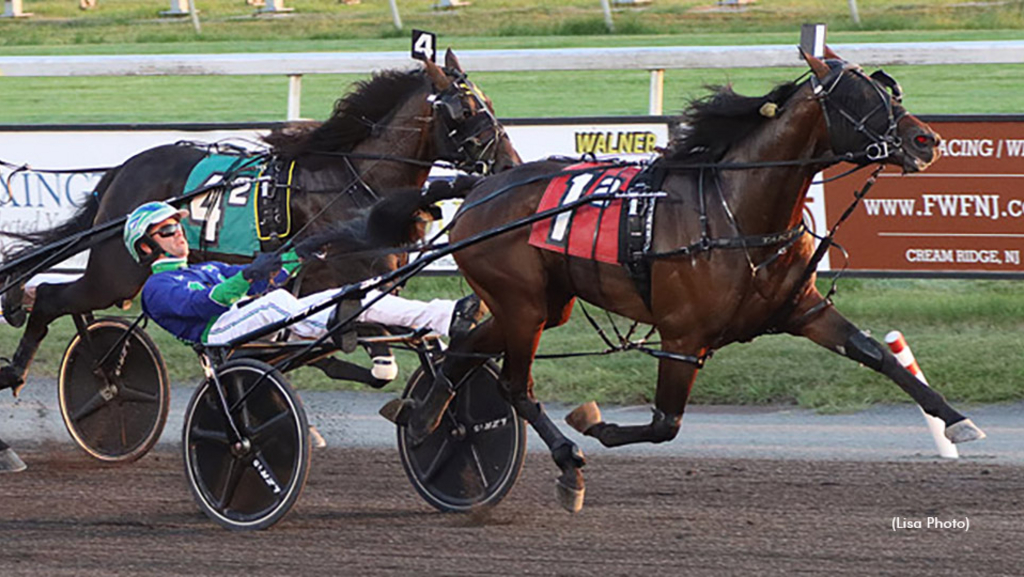 Pretender and Fashion Schooner were the winners in the first edition $275,000 finals of the New Jersey Classic for “A” level New Jersey-sired trotters on Friday night (Sept. 9) at The Meadowlands.

In the split for three-year-old colts and geldings, Pretender (pictured above) pulled off a surprise, taking down 1-9 favourite – and Beal winner – Temporal Hanover in a lifetime-best 1:51.3 for driver Andy McCarthy and trainer Nancy Takter.

Only four got behind the gate, but there was plenty of action early nonetheless, as 2021 Peter Haughton Memorial winner King Of The North moved quickly to the top while Pretender settled into the two-hole as Temporal Hanover sat third and Periculum fourth.

KOTN hit the quarter in :26.3 before backing the half down to :56.1. Just before the three-quarter mark, McCarthy moved Pretender off the rail to challenge the leader as Temporal Hanover followed that live tow.

Pretender, a colt by Muscle Hill out of Maven, then sprinted his final quarter in :26.3 to easily hold off Temporal Hanover by three-quarters of a length. King Of The North was third.

“I thought it was going to work out that way,” said Takter. “I thought Mark [MacDonald, driving King Of The North] would be aggressive. It was just a matter of Pretender out-sprinting the horse who made the front. Andy [McCarthy] drove him perfectly. Pretender will head to Canada for the [Sept. 24] Canadian Trotting Classic and, assuming he stays well, then the [Oct. 9] Kentucky Futurity and the [Oct. 29] Breeders Crown. He’s been racing super all year and hopefully he can add to that and get some more accolades.”

As the 9-2 second choice in the betting, Pretender returned $11.40 to win while raising his lifetime earnings past the $500,000 plateau.

Fashion Schooner continued her divisional dominance, taking the NJC division for sophomore trotting fillies in 1:50.2, just a fifth of a second off her Hambletonian Oaks-winning lifetime best. 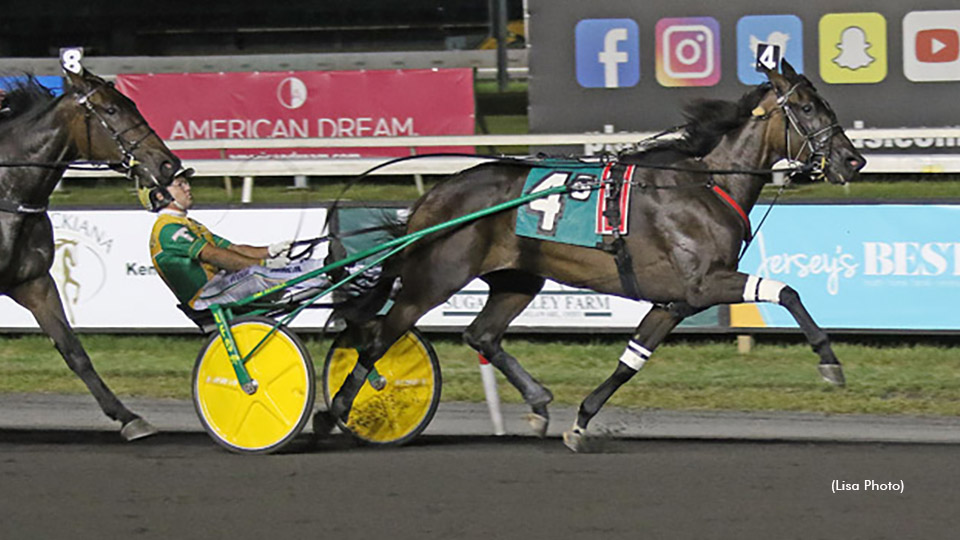 After choosing to sit fourth to the quarter, driver Tim Tetrick, who Tuesday pushed his lifetime earnings past the $250 million USD mark, moved Fashion Schooner to the top with a quick burst of speed and reached the half in :56.

“With her, I try to have a clear path,” said Tetrick. “Once I get her started, she kind of has a mind of her own and wants to get to where she wants to be.”

Fashion Schooner turned into the stretch two lengths to the good and appeared on the way to an easy score, but despite closing in :26.4, had to withstand a blistering final sixteenth by second-place finisher – and Hambo elimination winner – Jiggy Jog S, who came up a neck short. Raised By Lindy was third.

“That horse of Ake’s is a really good mare,” said Tetrick of Jiggy Jog S. “But we got the jump on them a little bit. My mare raced great and we got to the wire first. She kept digging, it’s just that the other horse raced really well. My horse has been pretty impressive all year long. It’s just a matter of whether she can keep her mind straight. Jim and the connections have done a great job with her.”

IT’S CAMPBELL’S WORLD: Winning the NJC wasn’t enough for Campbell. His Next Level Stuff went wire-to-wire in the fifth and final $40,000 leg of the Miss Versatility for open mare trotters, hitting the wire in a lifetime-best 1:50.4 to give the trainer two winners on the card. 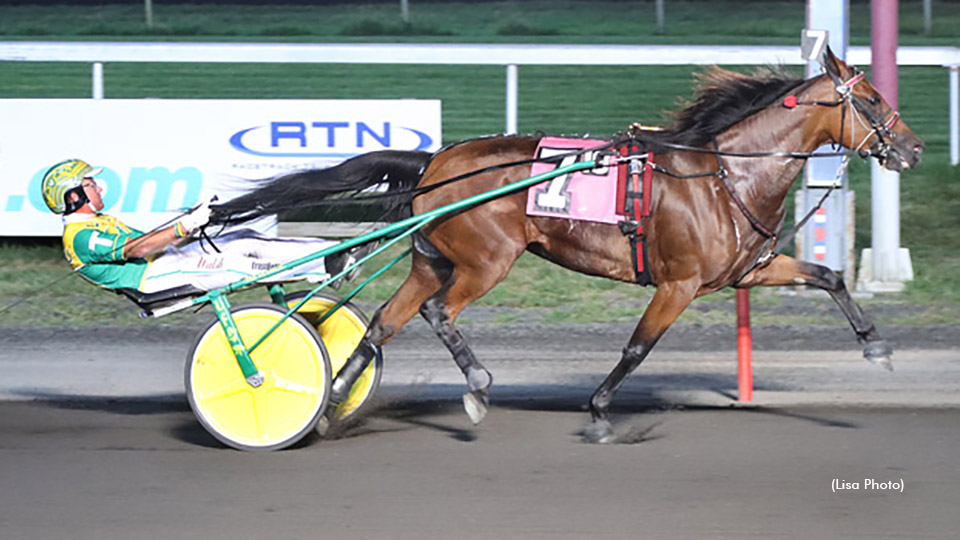 Finishing second, 1-1/2 lengths back, was 1-5 favourite Bella Bellini, who never threatened after going a three-hole trip.

DOUBLE CARRYOVER: For a second consecutive program, there were no winning tickets sold in the 20-cent Pick-6, setting up something players truly love, a double carryover.

The Pick-6 begins with race eight and free past performances for every race of every Meadowlands card are available by going to playmeadowlands.com. Those with five correct on Friday collected $815.58.

A LITTLE MORE: “It’s special that I got to $250 million,” said Tetrick. “I love driving horses and, fortunately, all of my dreams have come true.” … Tetrick, Andy McCarthy, Todd McCarthy and Brian Sears all had driving doubles. … Melander, like Campbell, trained a pair to victory lane. … All-source handle totalled $2,297,168. … Racing resumes Saturday at 6:20 p.m.