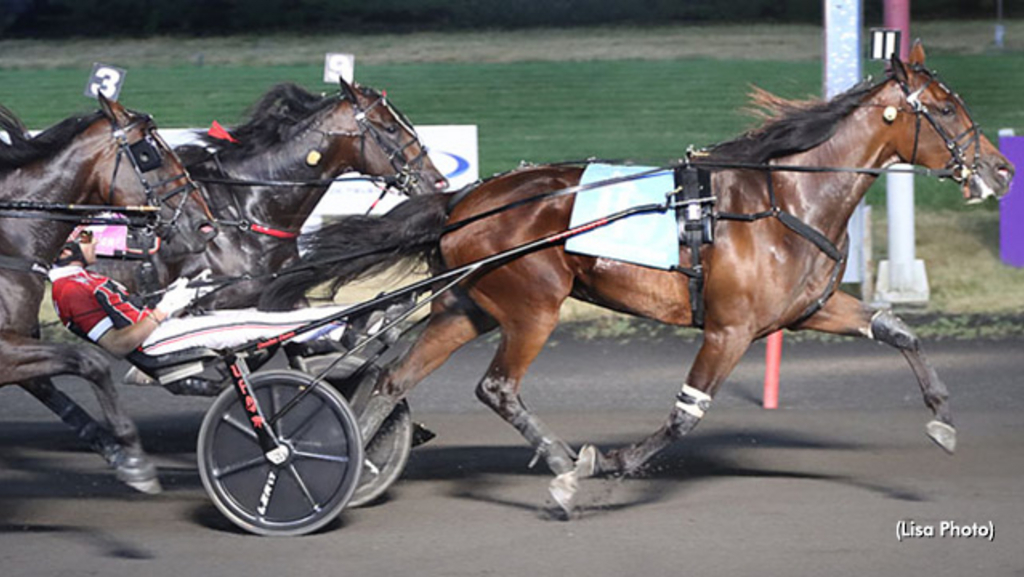 Last year’s Hambletonian Oaks winner Bella Bellini journeyed overland out of her second-tier starting spot and overpowered all in her way to post a world-record 2:04.1 win over 1-1/8 miles in the $432,000 Hambletonian Maturity on Saturday (July 16) at The Meadowlands.

Driver Dexter Dunn scored Bella Bellini from the center of the gate in the second tier to track Balenciaga at race’s dispatch. She then took back to ninth before Balenciaga broke stride, leaving Take All Comers to contend with Rattle My Cage in the :25.4 first-quarter sprint to the first turn. Cuatro De Julio floated towards the lead to grab the top into the backstretch before Rattle My Cage sprang back out to reclaim the lead.

Rattle My Cage raced on an uncontested lead by a :54.2 half while Dunn got underway with Bella Bellini. No one flushed off the pylons to supply cover to the four-year-old Bar Hopping mare, so she ground uncovered to the far turn, though she caught brief cover as Cuatro De Julio vacated the pocket when the field reached three-quarters in 1:22. Cuatro De Julio put away Rattle My Cage off the turn, but Bella Bellini barreled to a one-length victory, knocking one-fifth of a second off the stakes and world record set by JL Cruze in 2015. Ambassador Hanover hustled into contention late to settle for third and Take All Comers finished fourth.

“She’s something else,” trainer Richard “Nifty” Norman said after the race. “There was a lot of strategy there, and none of it worked out the way we thought it would. That was a real good run, to be uncovered so long.... I was a little concerned about that, but she was very relaxed trotting up there. Andy [McCarthy] pulled the two-hole, which gave her just a little bit of the cover she likes, and she did the rest.”

Bella Bellini has now banked $1,575,776 and has won 16 of her 35 starts. Norman trains last year’s Dan Patch Three-Year-Old Trotting Filly of the Year for owner David McDuffee. She paid $5.80 to win.