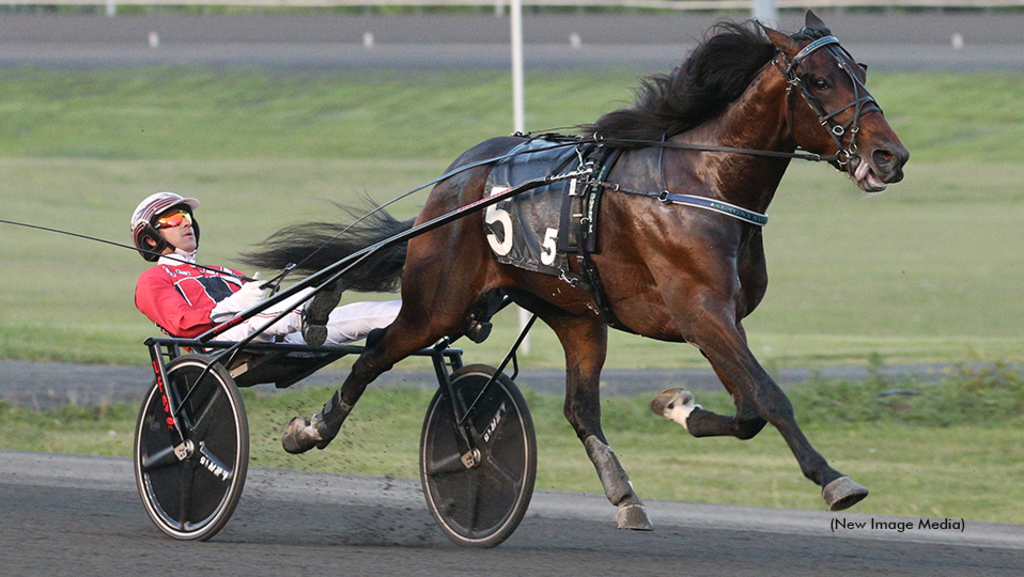 On Saturday (June 18) Dexter Dunn will sit behind morning-line favourites in the $251,000 Goodtimes Stakes for three-year-old male trotters and $211,000 Armbro Flight Stakes for older female trotters, one a Hambletonian hopeful — Fast As The Wind — and the other, Bella Bellini, last year’s Hambletonian Oaks champion.

Fast As The Wind is the 8-5 favourite in the Goodtimes, where he is one of seven Hambletonian-eligible trotters in the 10-horse field. Bella Bellini is the 2-1 choice in the Armbro Flight, which features the event’s past three winners: When Dovescry, Hey Livvy, and Atlanta.

Eliminations were unnecessary for the Armbro Flight. In the Goodtimes, the Tony Alagna-trained Fast As The Wind won his elim by three lengths over Southwind Domino in 1:53.2. It was his first win in three starts this season, following a nose loss to older warhorse JL Cruze and a third behind four-year-olds Rattle My Cage and Delayed Hanover.

Last year, Fast As The Wind finished third in the Peter Haughton Memorial before battling sickness in the fall. He recovered to finish a parked-out second from post 10 in the Breeders Crown final followed by three consecutive victories, including the Kindergarten Classic Series championship and Valley Victory Stakes.

“He finished last year off so good, and he’s gotten a bit stronger and a bit faster,” Dunn said. “I couldn’t be happier with him. His two runs at The Meadowlands were super, especially the second one. His trotting rhythm is really good. He’s got a good stride on him.”

In his Goodtimes elim, Fast As The Wind took the lead at the half-mile point, fended off a challenge from Pretender at three-quarters, and marched home as the 2-5 favourite.

“He’s never been as good on the front, he’s always been better chasing,” Dunn said. “But what I really liked is when (Pretender) came outside of me at the top of the stretch, when I asked him to go on, he really took off. He’s good.”

Fast As The Wind, a son of Cantab Hall out of Wind Stroll, has won six of 18 career races and earned $587,727 for owners LeBlanc and Kribbs, Joe Sbrocco, John Schmucker, and Fodera Barbera Frank.

Twin B Archie, who won the other Goodtimes elim by a head over Looks Like Moni, is the 3-1 second choice on the morning line. He is not Hambletonian eligible.

In the Armbro Flight, Bella Bellini enters off her first win of the season, a head triumph over Atlanta in 1:51.2 in the June 4 Open at The Meadowlands. She came her final quarter-mile in :25.4 with David Miller driving in place of Dunn, who was at Mohawk for the night.

In her previous three starts this year, Bella Bellini was third in the Cutler Memorial, won by Ecurie D DK with a world-record effort, second in a leg of the Graduate Series, and second in a division of the Miss Versatility Series.

Last year, the Nifty Norman-trained Bella Bellini hit the board in 18 of 19 starts, winning 11. Her triumphs included the Hambletonian Oaks and Breeders Crown on her way to the Dan Patch Award for best three-year-old female trotter.

“David was obviously pretty happy with her (in her last race); it was beautiful,” Dunn said. “I drove her bad in her second start. I moved her to the front when I shouldn’t have, but she still raced great.

For her career, Bella Bellini has won 12 of 30 races and earned $1.19 million for breeder-owner David McDuffee.

Seven-year-old Atlanta, who won the 2018 Hambletonian and is a two-time Dan Patch Award winner and one-time O’Brien Award honouree, is the 5-2 second choice on the morning line followed by five-year-old Next Level Stuff at 4-1 and six-year-old When Dovescry at 6-1.

When Dovescry will attempt to become only the second mare to win the Armbro Flight in back-to-back years in the past 16 years. Hannelore Hanover captured the event three times in a row, 2016-2018.