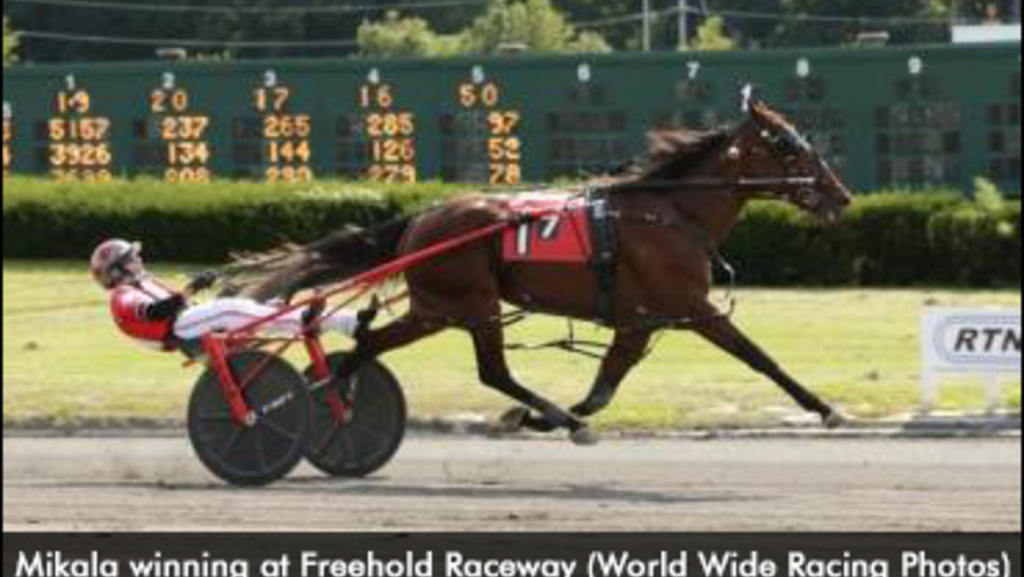 Given time to mature at age two, Mikala is stepping up for her connections this season at three. In her most recent race 10 days ago, she won the New Jersey Sire Stakes Standardbred Development Fund final at Freehold Raceway in 1:52.1, becoming the fastest female pacer in the half-mile track’s history in the process.

On Wednesday, she competes at another half-mile venue, the Delaware County Fairgrounds in central Ohio, in the $253,800 Jugette for three-year-old filly pacers. The Jugette attracted a field of 10, so two $50,760 eliminations will be contested to determine the eight horses that will return later in the day for the $152,280 final.

Mikala is the 4-1 third choice on the morning line in the first elimination, behind favourite Nashville Elgenna at 2-1 and Scarlett Hanover at 7-2. Test Of Faith is the 8-5 favourite in the second elimination. The top four finishers from each division advance to the final.

Trained by Nik Drennan, Mikala has won six of 12 races this year and hit the board a total of nine times, earning $149,698 for owners Joe Davino, Brad Shackman, Anthony Perretti Farm and Drennan Stable.

She had two wins and a second in three preliminary rounds of the Pennsylvania Sire Stakes before finishing sixth from post eight in the final at The Downs at Mohegan Sun Pocono. She finished third in the Shady Daisy on Hambletonian Day at The Meadowlands, behind Grace Hill and Fire Start Hanover.

Last season, Mikala was limited to two starts before being turned out and given time to mature physically. The daughter of Always B Miki-Shes Some Treasure was purchased under the name Heymikiyousopretty for $180,000 at the 2019 Lexington Selected Yearling Sale. Her mom is a full sister to Hall of Famer Captaintreacherous.

“She showed signs that she had ability last year, she was just really immature,” Drennan said. “It was nothing serious, she just wasn’t ready to drive on with. I thought if she grew up and got a little sounder, her pedigree would step up. She did. She’s having a good go, and hopefully we keep it rolling.”

George Brennan, who has been behind Mikala in her past 11 races, will be in the sulky Wednesday for the Jugette. Brennan won the 2004 Jugette with Glowing Report.

“I like what I see; she looks good in there,” Drennan said about Mikala in the Jugette. “Hopefully she has a good couple days leading up to it and we’ll see what happens. She’s quiet, she’s laidback and easy to get along with. She can race from the front or the back and tries hard. She’s a good racehorse, that’s what I like about her.”

Mikala was lightly staked this year, with only next month’s Simpson Memorial at Harrah’s Philadelphia remaining on her schedule. But Drennan said the door is opened slightly to supplementing to some other races.

“There is a possibility, but we’ve just been taking a race at a time all year, so we’ll just get through this week and go from there,” Drennan said. “She is in good form, the Jugette came up, and here we are.”

Pelling, who captured the 1998 Jugette with Armbro Romance, sends out Test Of Faith tomorrow. Test Of Faith is a neck from undefeated in nine races this year and has won 16 of 18 career starts. She enters the Jugette off a win in the New York Sire Stakes final.

Burke, a three-time Jugette winner, entered three fillies for Wednesday’s race: Scarlett Hanover and Paulas Bet Hanover in the first elimination and Continualou in the second. Burke’s Jugette victories came in 2019 with Warrawee Ubeaut, 2015 with Sassa Hanover, and 2012 with Darena Hanover.

Brown, who won the 2014 Jugette with Colors A Virgin, has one of this year’s two supplemental entries in the race, Irish import Oakwoodanabella. The filly, who is two-for-two in conditioned races since arriving in the U.S., is 6-1 in the second elimination. She was the British Harness Racing Club’s 2020 Horse of the Year after going unbeaten in six races as a two-year-old.

Racing begins at noon Wednesday at the Delaware County Fairgrounds. The Jugette eliminations are races 16 and 17 and the final is race 20. For complete entries, click here.