Fashion Schooner, Niki Hill Back In Action At Big M 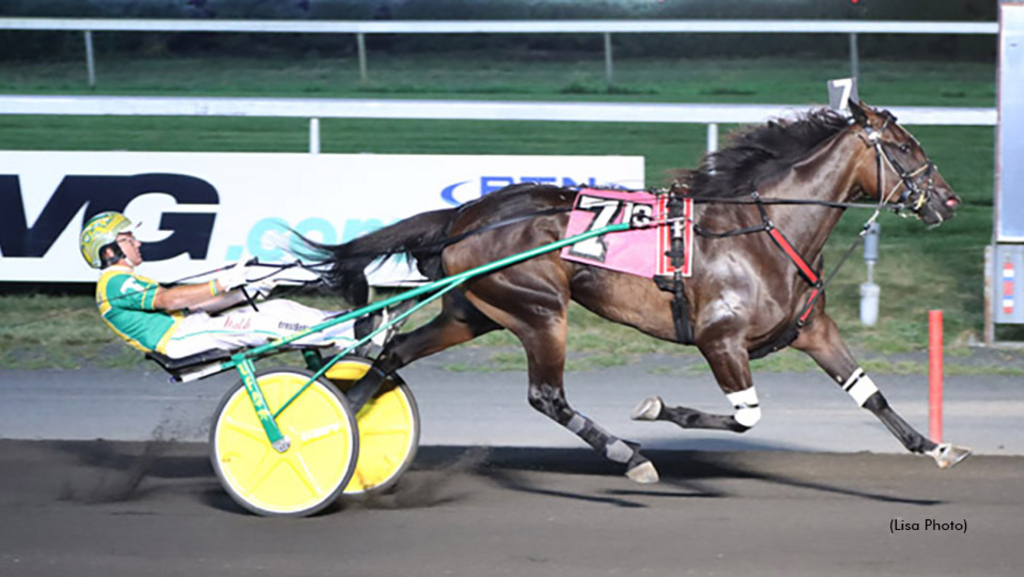 Having been on the sidelines since a sensational 10-hole speed score in the $500,000 Hambletonian Oaks on Aug. 6, Fashion Schooner knocked off some cobwebs Friday night at The Meadowlands, easily taking the $30,000 featured Three-Year-Old Open Filly Trot.

Unlike Hambo Day, when the Jim Campbell trainee was sent to the gate at odds of 6-1, this time around the daughter of Walner-Broadway Schooner was bet down to 1-5 by the players, and she delivered with ease, hitting the wire 2-1/4 lengths in front of Lilbitalexis. Yanaba was third.

Fashion Schooner sat a three-hole in the early going, vacated the rail just before the three-eighths, made the lead while parked at the half and strolled home from there completing the mile in 1:52.1 with driver Tim Tetrick at the controls.

His filly had been away for almost a month, but Campbell was confident heading into Friday’s race.

“I went five weeks off with her before the [July 1] Reynolds and she went a good race [a close second]," he said. "She’s such an athletic filly, so it doesn’t take much to keep her in shape.”

Campbell’s star pupil is the likely favourite for next week’s $300,000 New Jersey Classic final, an event that makes its debut this year.

“With only eight fillies entered, there were no eliminations tonight, so I wanted to use this as a prep,” said Campbell. “I didn’t want to race her anywhere else. I just wanted to use this race. The New Jersey Classic is a very good program. It gives us a chance to race these two- and three-year-olds for good money. And we don’t have to travel, so that’s a bonus. The program provides a good incentive to buy New Jersey-bred horses.”

What’s ahead for Fashion Schooner?

“We’ll wait and see how things go next week,” said Campbell, who became only the third trainer ever to sweep both the Oaks and Hambletonian (with Cool Papa Bell) on the same day. “Then, probably the [Oct. 9] Kentucky Filly Futurity. After next week, I think we’ll only go one or two more starts before the [Oct. 29] Breeders Crown.”

Owned by Fashion Farms, Fashion Schooner upped her lifetime stats to six wins from just 12 starts, good for earnings of $483,462. She returned $2.40 to win.

NIKI HILL REPORT: Niki Hill, a winner of eight of nine starts during 2021, a season that saw her earn more than $960,000 while winning the Three Diamonds, Kindergarten and Breeders Crown, qualified before the betting card, going wire-to-wire in 1:52.1 with Dexter Dunn driving.

The Dan Patch Award-winning two-year-old pacing filly from a year ago is looking to get her 2022 campaign rolling. In her only pari-mutuel start this year, the daughter of Always B Miki-Road Bet went off stride in the stretch of a Pennsylvania Sire Stakes event at Harrah’s Philadelphia as the 1-5 public choice on May 29 and finished eighth.

“She didn’t handle the track that day,” said trainer Chris Ryder. “And then she missed some time because she had some trouble with her feet. But we are very happy with her qualifier. She was nice and strong. We’ll qualify again next week and then hope to race in an overnight at The Meadowlands before we head to The Red Mile for the Bluegrass on October 1st.”

A LITTLE MORE: Tetrick finished the night atop the driver colony with three victories. … Campbell had a training double. … All-source handle on the 11-race card totalled $1,736,206. … Racing resumes Saturday at 6:20 p.m.