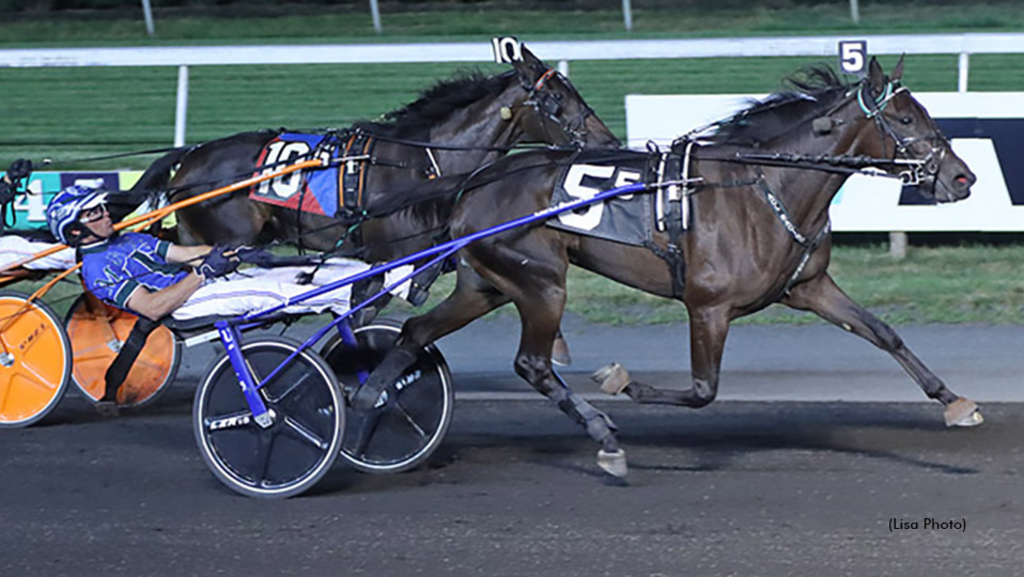 When trainer Anette Lorentzon bought trotting filly Quick Stop as a yearling at last fall’s Standardbred Horse Sale, it was with an eye toward the future. But the eye on the present is pleased with the purchase as well.

Quick Stop has hit the board in four of five races this season, winning two, as she heads to Friday’s $275,000 New Jersey Classic “A” final for two-year-old female trotters at The Meadowlands. Quick Stop, who on Sept. 1 notched her first Grand Circuit victory by capturing a division of the Kindergarten Classic Series, is the 3-1 second choice on the morning line in a field of five New Jersey-sired fillies.

Lorentzon bought Quick Stop, a daughter of Tactical Landing out of the millionaire mare Falls For You, for $72,000. She is a half-sister to Grand Circuit winner Mazzarati and her family also includes two-time O’Brien Award winner Armbro Officer and Dan Patch/O’Brien awards winner Armbro Monarch.

“We were trying to find a trotting filly we could keep as a broodmare, so I was looking for a broodmare prospect for after racing,” said Lorentzon, who owns Quick Stop with her family’s ACL Stuteri AB. “I liked the pedigree on her and she was athletic looking. A lot of the Tactical Landings were bigger and heavier, and she wasn’t like that. She was more a race type.”

Quick Stop won her debut in 1:55.3 on June 30 in the New Jersey Sire Stakes and followed that performance with a third in the second leg of the series and fourth in the final. She then headed to the Kindergarten, where she finished second on Aug. 5. Her victory in her most recent start saw her rally from fifth at three-quarters to score by a length in 1:56.2.

“We liked her from the beginning,” said Lorentzon. “She’s got a good attitude. She showed speed when we started with her, but I took my time because she could be a little bit aggressive. She had a little bit of an issue early on where she could get pacey, but we changed her shoeing and, knock on wood, she’s been a lot better.

In addition to the Kindergarten, Quick Stop is eligible to many of the remaining Grand Circuit events on the calendar, including the Bluegrass, International Stallion, Breeders Crown, Matron and Goldsmith Maid.

“She has a lot of opportunities after this,” said Lorentzon. “We just take one race at a time, see how she comes out of it and go from there.”

Quick Stop will start Friday’s Classic final from post three with Todd McCarthy in the sulky.

“She trained good, and everything seems good with her,” said Lorentzon. “You always hope to win, but it’s always tough to do that. I’m just happy to have her in there. Hopefully, she gets a good piece of it.”

Jim Campbell-trained Grand Fashion is the 2-1 favourite in the Classic final for two-year-old female trotters. The daughter of Walner-Broadway Schooner is a full sister to Fashion Schooner, whose victories this year include the Hambletonian Oaks as well as the New Jersey Sire Stakes and Classic “A” finals.

In the $275,000 Classic “A” final for male trotters, Oh Well is the 5-2 favourite. The son of Muscle Hill-Fine Tuned Lady won the New Jersey Sire Stakes championship and finished second in the Peter Haughton Memorial. The colt is trained by Marcus Melander.

The even-money favourite in the $150,000 Classic “A” for female pacers is Ucandoit Blue Chip from the stable of Linda Toscano. The daughter of Keystone Velocity-Molly Can Do It has hit the board in all six of her races, winning four including the New Jersey Sire Stakes final.

Following Friday’s fifth race, the $150,000 Classic “A” for male pacers will go as a non-betting event. The three-horse field is led by New Jersey Sire Stakes champ Voukefalas. Michael Russo trains the son of Lazarus N-Inittowinafortune.