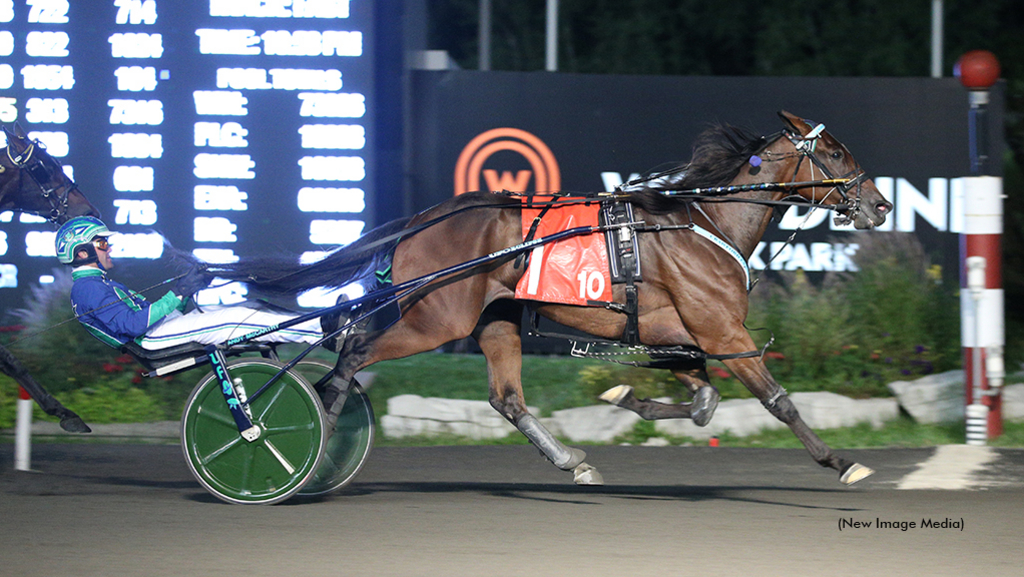 Four-year-old trotter Ahundreddollarbill, the 2021 Canadian Trotting Classic champion, returned to the scene of his biggest victory for a tune-up during Tuesday morning's qualifiers at Woodbine Mohawk Park.

The Tony Alagna trainee, who last raced on July 16 finishing sixth in the Hambletonian Maturity at The Meadowlands, cruised through panels of :28.4, :58.1 and 1:26.4 en route to the 1:55.2 qualifying win with Mycrownmykingdom -- back in action for the first time since June for trainer Luc Blais -- right on his back the entire mile. Steel Reserve finished 19 lengths behind in third.

Ahundreddollarbill was a back-to-back winner in June at The Meadowlands, where he took his lifetime mark of 1:50.2 and prevailed in a leg of the Graduate Series. A 12-time career winner, he's added nearly $50,000 from seven starts this year to his $816,687 bankroll for owners Crawford Farms Racing and James Crawford.

The Chapter Seven-Swinging Royalty gelding is eligible to the $600,000e Maple Leaf Trot, which is scheduled for Saturday, Sept. 3 with eliminations this Friday, Aug. 26.

Driven by Jonathan Drury for trainer Carmen Auciello, Frank Brundle's four-year-old gelded son of Steelhead Hanover advanced from the back of the five-pack into an open three-hole on the backside then tracked cover through the far turn before sweeping by in the stretch and opening up nearly seven lengths for the 1:55.1 score with a :27.4 final frame. Air Strike and Sports Duchess finished second and third.

A replay of Tuesday's qualifying video stream is available below.