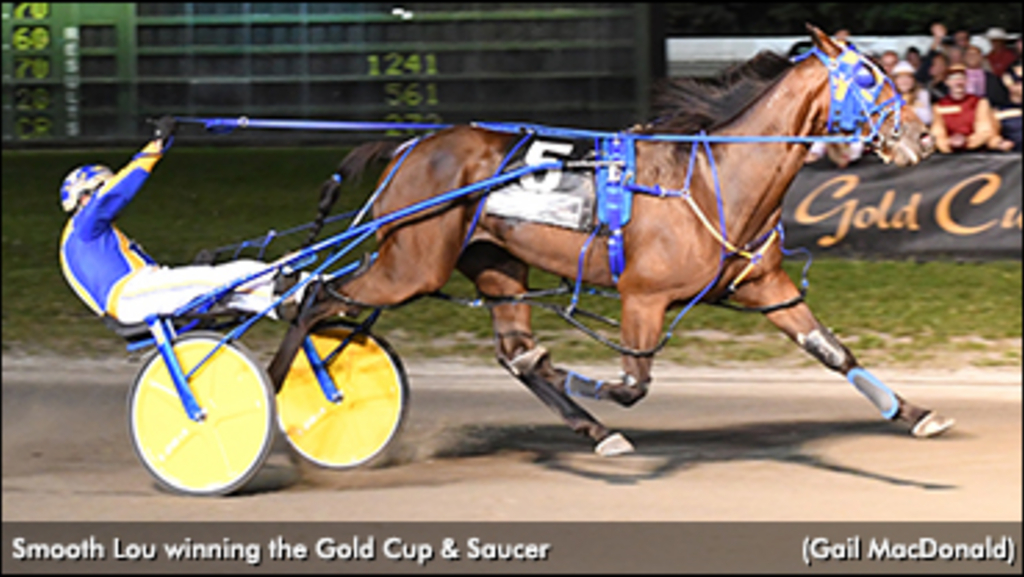 The Shepherd brothers, trainer Patrick and driver Robert, claimed victory in the 62nd edition of the $60,000 Guardian Gold Cup & Saucer with Smooth Lou on Saturday (Aug. 21) at Charlottetown Driving Park.

Shepherd fired Smooth Lou off the car, but initially failed to find a seat at the pegs while Somewhere Fancy protected position and motored to the lead. Taking back off the first turn, Smooth Lou settled into fifth before Shepherd committed to a first-over grind past a :27.2 first quarter.

Quickly, Smooth Lou rolled to Somewhere Fancy's side as the field clicked the half in :56.1. Smooth Lou remained wide around the third turn and accelerated into the backstretch, clearing command from Somewhere Fancy and separating himself from the field to three-quarters in 1:24.1. He continued to widen his advantage into the final turn and coasted through the lane to stop the clock in 1:51.1. Ideal Perception rallied off cover for second and Legion Seelster finished third.

"Wow" was Robert Shepherd's thoughts when crossing the line, he said after the race.

"I just wanted to float and try and hold a position," he also said. "But we kind of got in there for a minute and there was one outside, so I figured I'd just stay out and come on a slow grind. And it worked out."

Smooth Lou came into the Gold Cup & Saucer off a second-place finish in Trial 3 on Monday (Aug. 16), where he finished second to Somewhere Fancy.

"Patrick had him ready," Shepherd said. "He had a great first trial, he wasn't hurt or anything like that. It worked out our way tonight. I could still hear someone, and I wasn't letting up. I was driving to the wire; I was making sure, if I had the chance, I was getting it done.

"It's what we always wanted to win. And it was our night."

A five-year-old gelding by Sweet Lou, Smooth Lou collected his seventh victory from 23 starts this season and his 16th from 49 overall, accruing $167,381 in earnings. The gelding competes for owners Triple S Equine and Robert and Ronald Woodburn. He paid $10.50 to win.

Also on the card, Dreamfair Zenfire won the $8,000 Birthplace of Confederation Open Mares Pace in 1:54.1 for trainer-driver Marc Campbell.

Daisy River won the $6,000 Colonel Dan Trot in a new track and Atlantic trotting record of 1:56.1 for driver Hughes and owner-trainer William Lanigan.

Campbell had a driving triple during the program and was awarded the Francis McIsaac Memorial award for leading driver of Gold Cup Week 2021.

Hughes had four wins on the night.

Just a great week for harness

Just a great week for harness racing on PEI, and the Maritimes in general, weather cooperated, crowds were up from last year, I believe the wager was up from last year, great miles and coverage was fantastic, and lots of "BOOMS JUST LIKE THAT", great job Vance. Enjoyed every card of racing from the comfort of my home. Congratulations to Lee Drake, and his excellent team, job well done. Hopefully I will get to PEI for Old Home Week again when the world gets back to some kind of normal. Once again congratulations to everyone involved. Ron Clarke, Cape Breton.