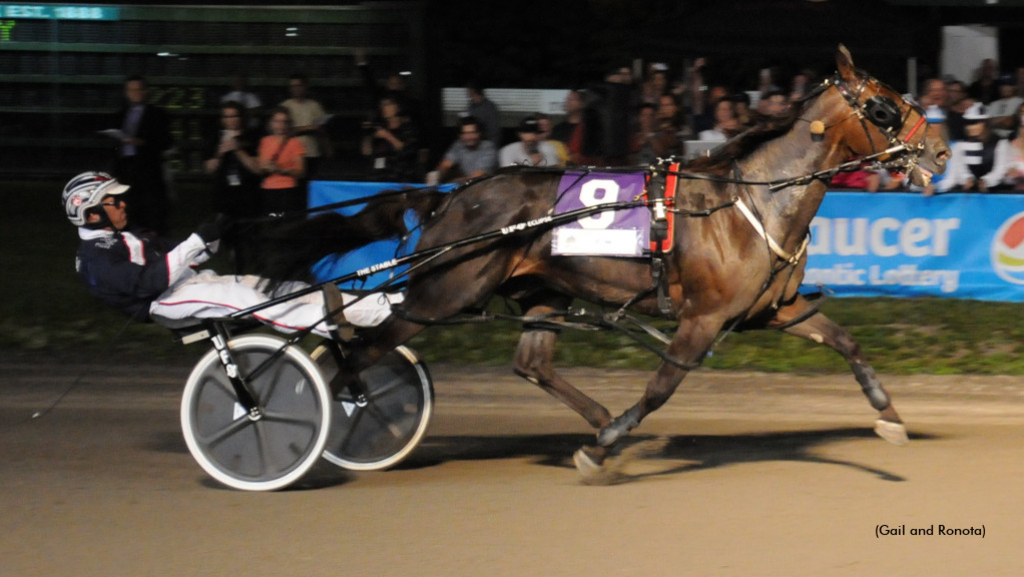 Sintra came into the 63rd edition of the Gold Cup and Saucer as the class of the field, and the classy campaigner converted for his multitude of fans and connections to deliver the much sought-after title for driver Anthony MacDonald on Saturday (Aug. 20) at Red Shores Racetrack & Casino at the Charlottetown Driving Park.

A field of nine pacers went postward for Gold Cup and Saucer 63, presented by Atlantic Lottery featuring a purse of $100,000 — the first six-figure purse in the race's history. As the wings of the starting gate folded, favoured Patrikthepiranha A (Wally Hennessey) and fourth choice Ideal Perception (Austin Sorrie) were intent on gaining the front end. Intent might not do justice to the sharp :26.1 speed duel waged by those two speedsters, with Ideal Perception finally clearing from post three as Patrikthepiranha A relented to the pocket.

Sintra and Anthony MacDonald followed Ideal Perception off the gate and was able to sit third behind that hot early tempo. MacDonald didn't ask Sintra to move until just before the field approached the halfway point. Nearing the half-mile mark, No Plan Intended (Jody Jamieson) was gaining ground first-over but that quickly became a third-over tow. Major Hill (Pascal Berube) slid to the outside from fourth and Sintra also received right-line orders to start an outer-flow approach of his own.

Perhaps it was the sting of that sharp opening, or perhaps it was just that Sintra was enjoying the Maritime air, but the nine-year-old pacer powered past Ideal Perception before reaching the third station in 1:22.3 and opened up a quick four lengths on the field. The early leaders, Ideal Perception and Patrikthepirahna, were no longer contenders. Ideal Perception showed the effects of that early tussle and Patrikthepirahna went on a break. Jamieson had No Plan Intended well spotted to clear and land in second around the final turn, but did he have enough to collar the former Canadian Pacing Derby and O'Brien Award winner?

He did not. He rallied valiantly, but Sintra and Anthony MacDonald were in no mood for company on the front end. They were heading for the wire alone and with purpose, and the only question left was if they would break the track record. They came oh so close, hitting the wire in an awesome 1:50.1 to tie — but not break — the mark set by YS Lotus six years ago to the day (August 20, 2016).

For driver MacDonald, who was making his 13th start in the Gold Cup and Saucer and had come within a quarter length of glory before, the victory gives the longtime horseman a rare opportunity to check off a bucket list item for himself and show off this tremendous event to a number of his owners.

"Honestly, all these people represent horse racing and, you know, without them, I don't have a job. It's important that everybody recognizes the importance of fractional ownership and what it represents for the future of our industry. And I think you needn't look any further than the winner's circle to see that."

MacDonald noted that the trip that his O'Brien Award-winning brothers Mark and James mapped out was indeed a winning one.

"It was great, worked out really good. Our plan was, actually that was Mark and James's plan — follow the three [Ideal Perception] out and take your time." 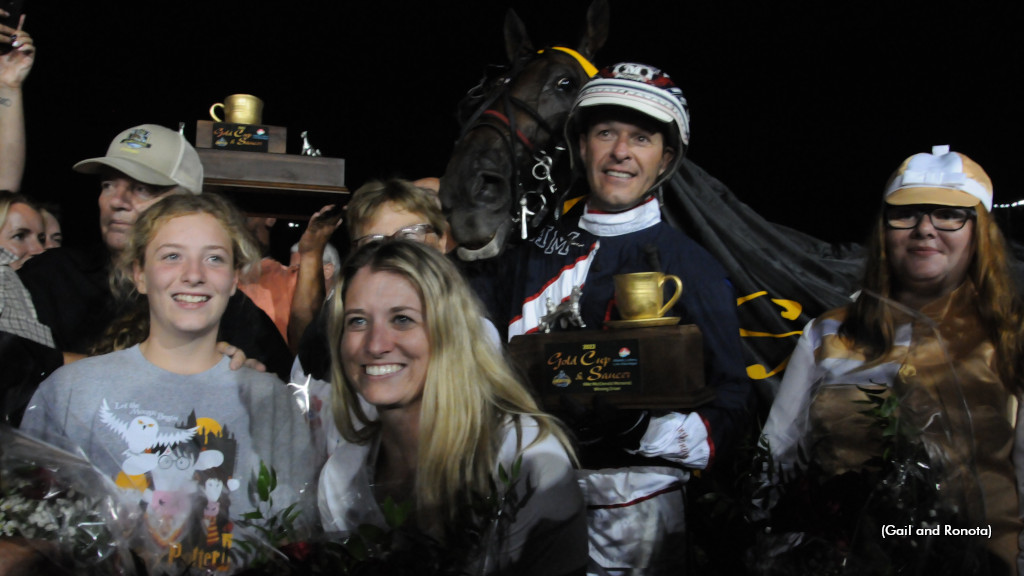 Corey MacPherson had a driving triple on the card winning with Frontier Cruise (1:55) for J.C. Belliveau, Soccer Hanover (1:54.1) from the Leith Waite barn and with Stash It Away in a $18,750 Joe O’Brien Gold division for three-year-old colt pacers in 1:54.3.

Dreamfair Zenfire won the $8,000 Birthplace Of Confederation Series, presented by the City of Charlottetown in honour of Lloyd Palmer, in line to trainer Marc Campbell in 1:53.2 for owners Ryan and Everett MacLeod of Souris. Campbell won the Francis McIsaac Memorial award for top driver of Old Home Week.

Mike McGuigan was the recipient of the Earl Smith Memorial Award for leading trainer of Old Home Week and also won the top percentage driver award.

Bugsy Maguire and Austin Sorrie won the $6,000 Premier’s Pace in 1:52.3 for trainer Wade Sorrie and owner Walter Simmons of Summerside.

The full card of harness racing from Saturday (August 20) at Red Shores Racetrack and Casino at the Charlottetown Driving Park, culminating with the 2022 $100,000 Atlantic Lottery Gold Cup and Saucer, is available below.

To view the results from the Saturday card of harness racing at Charlottetown, click the following link: Saturday Results (night) - Charlottetown Driving Park.

Dr. Mitchell Downey drove his own Blood Money to a 1:56.4 three-quarter length victory in the $3,300 Monctonian Pace from post three for trainer Ellen Stevenson. The New Brunswick pacer prevailed over Ironside Seelster (Corey MacPherson) and Better Than Cash (Ambyr Campbell) on the Saturday afternoon card before the big dance on Saturday night.

Tempo Seelster was the best in 1:58 in the Chris MacPherson Memorial in honour of a beloved former Special Olympian and race fan. Ken Murphy steered the Gary Poulton co-owned and trained 12-year-old for co-owner Dewar Burhoe of Charlottetown.

The $9,375 Grassroots divisions of the Joe O’Brien stake for three-year-old pacing colts saw victories by Elm Grove Quail (Paul Langille) in 1:54.2 along with Elm Grove Qwiggly (Marc Campbell) in 1:54.3.

MacPherson had the hot hands on the day winning the Don MacLeod Memorial with Brookdale Sienna in 1:58.2 for trainer Keith Campbell and a double from the Paul Conway barn with Private Dancer (1:58) in the George Wilkie Memorial and Shifting Views (1:55.2) in the Levi Leblanc Memorial.

Rollwithhottytoddy had one of the fastest wins of Old Home Week as Ontario driver Brett MacDonald steered the Rollwithitharry colt to a 1:53 flat win for co-owner and trainer Trevor Hicken of Montague and owners Toddy and Trish Hardy of Nova Scotia.

(With files from Red Shores)