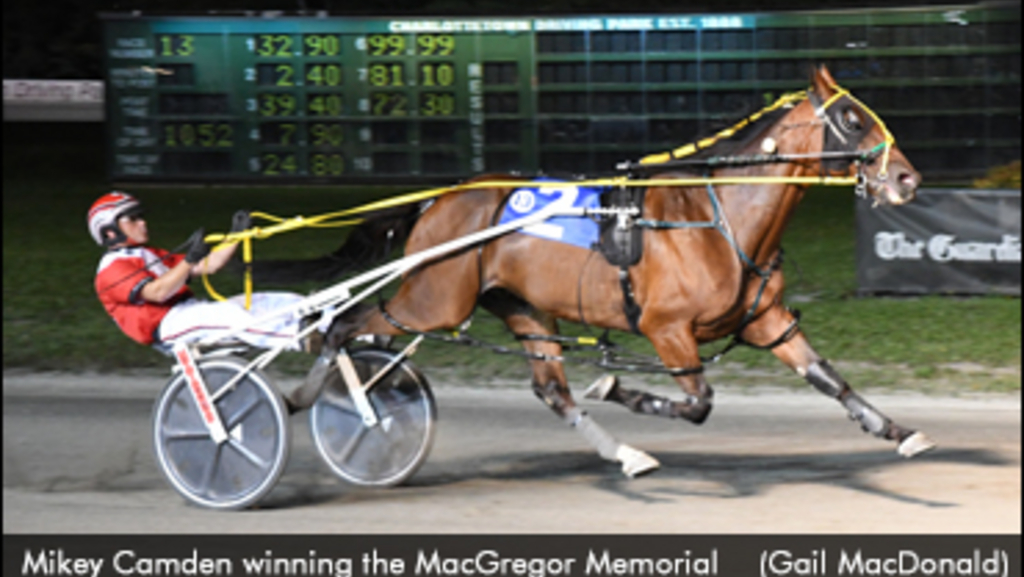 Driver David Dowling put Mikey Camden on the lead and never looked back on their way to winning the fastest $20,000 James 'Roach' MacGregor Memorial, the Gold Cup & Saucer Consolation, on Friday evening (August 20) at Red Shores at Charlottetown Driving Park.

He continued to lead through a half in :55.2 and three-quarters in 1:23.2 with Avatar J (Gilles Barrieau) advancing first-up and ducking into the three-hole behind Bugsy Maguire, who moved to the passing lane as they turned for home. He inched up towards Mikey Camden, but the front-striding pacer drew away at the end by 3-3/4 lengths to win. Bugsy Maguire settled for second-place and Avatar J finished third.

"I don't know what to feel right now, it's pretty exciting. It's something that I dreamed of as a kid around P.E.I. and here we are," said Dowling from the winner's circle. "I talked to Corey before the race and he said to put him on the gate and give him a shot. I got him to the front and the rest was 'hang on.' He does it so easy, it didn't seem like we were going that much." 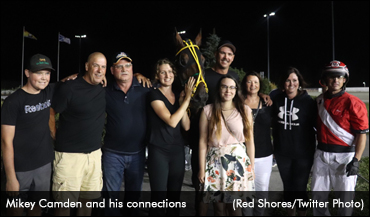 Mikey Camden, who had finished fifth in the second of three Gold Cup & Saucer Trials, paid $2.40 to win as the 1-5 favourite.

The Camluck-Electrical Art gelding, who has four wins from 13 starts this year, notched his 20th career victory and lifted his lifetime earnings to $83,885.

Dowling will have a shot at the big dance tomorrow, picking up the catch drive on Trial winner Somewhere Fancy from the inside post for trainer Chris MacKay and owner John Mehlenbacher.

"I like my chances," he said. "We'll see what happens behind the gate."

Old Home Week racing will conclude with a double header of harness action on Saturday at Red Shores, featuring the 62nd edition of the $60,000 Guardian Gold Cup and Saucer.

Sent postward as the the 9-5 favourite, the front-striding Plain Jane ($5.90) held off Woodmere Vanish, as that filly shot up the passing lane, to win the first division by a half-length, lowering her lifetime mark to 1:56.2. Marc Campbell trains and drives the homebred Shadow Play-Ruthie Jane filly, who notched her fourth win from 12 starts this year for owner Leigh Gavin of Tignish, P.E.I. Emmy Lou Hayes closed to nab third over Woodmere Leah, finishing 2-1/4 lengths behind.

Fresh off her 1:53.4 track record victory last Saturday in Atlantic Sires Stakes action, heavy favourite Tobins Brownie ($2.70) romped to a four-length victory in 1:56 flat in the second Gold division for trainer/driver David Dowling. The Stonebridge Terror-Putnam MacKenzie filly is owned by James Quinn, Carl Peterson, Amy Katherine Lakie and Brittany Watts. The win was her third this season and 12th from 19 starts lifetime, pushing her bankroll to nearly $80,000.

Three $8,300 Grassroots divisions were won by: Elm Grove Penelope ($4.70) in a new mark of 1:58.4 with Redmond Doucet driving for trainer and co-owner Stephen Lewis; the Kevin MacLean-trained Bet The Tide ($2.50) in 1:57.1 with Gilles Barrieau in the sulky; and Kck Girlies ($2.20) in a career-best 1:55 flat for driver Marc Campbell and trainer Mike McGuigan.