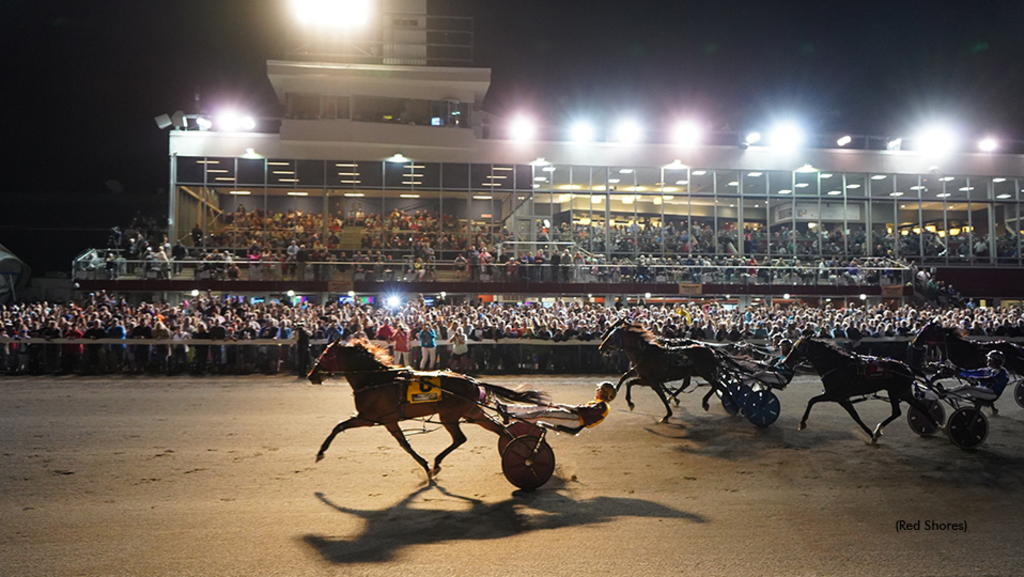 The 63rd edition of the Gold Cup and Saucer will parade under the light after midnight Saturday evening at Red Shores Racetrack and Casino at the Charlottetown Driving Park as the crowning moment of Old Home Week 2022.

Track announcer Vance Cameron is hoping for one for the record book as his final goal in the booth is to call a half-mile race that breaks the 1:50 barrier. The Saturday evening card kicks off at 7 p.m. with the $100,000 Gold Cup and Saucer final as the Race 14 finale.

The hard-leaving Ideal Perception has Post 3 after winning Trial 1 with Austin Sorrie in the bike for trainer Anthony Beaton, while Trial 2 winner Sintra will attempt give driver Anthony MacDonald and trainer Jamie Smith their first Gold Cup and Saucer win from the trailing Post 9. Hall Of Fame driver Wally Hennessey will sit behind Trial 2 winner Patrikthepiranha A from Post 2.

Here's how they'll line up just before midnight local time on Saturday.

The 62-year-old Cameron has called the race the past 25 years since 1997 and also was the track announcer in Charlottetown for the 1979 and 1980 seasons when he was the youngest to ever announce the Gold Cup and Saucer at age 19.

“Now every year I call it I’m the oldest ever and time is running out for me for that magical 1:49.4 mile,” Cameron said. “Until Sintra went in 1:50.3 in the Trial I didn’t think they had a shot at the track record. What we need in the final is a bit of a rabbit, someone go a half in :54 and a bit and we can do it and it can’t be Sintra because he has a wall in front of him.”

When the lights go out and the spotlight and the Island Hymn are presented Cameron says the butterflies still come out as he reads off the famous introduction of every horse and driver that he writes and tries to have timed to the second from when they pass by the grandstand. The track announcer says this year the stakes are even higher with the first six-figure purse ever on the line at Red Shores Charlottetown.

“They’re going to charge out of there,” Cameron said. “Pascal Berube is coming all the way down here to drive one horse off the rail and he’s going to sit up on him. I don’t see a whole bunch of strategy here. There are a few in here that probably aren’t good enough to win but they can leave and they’re going to.”

The wager in Charlottetown has been dramatically up for Old Home Week 2022 and Cameron is basking in the return to normalcy this season has brought.

“It’s so great to have the people back the way we had them all week. I can’t hear myself think now with the crowds we have on that tarmac and think how many more are watching at home from their living rooms.”

Cameron will always remember the compliment Dean Nixon paid in an interview after winning the 2011 Gold Cup and Saucer with Blissful Breeze. Nixon said the post parade was worthy of a $6 million race and Cameron has no qualms in saying Red Shores has upped their game even more with a race day broadcast that is unrivalled in the sport.

“Charlottetown is in a league of its own. There is a little more prestige here than definitely any track in the Maritimes and probably any half-mile track in the country. We have so many positive comments on our show that go out and I might be a little biased but honestly we are absolutely second to none. You’re not going to find another race like it.”

The Monctonian Pace will headline the afternoon program on Gold Cup and Saucer Saturday (August 20) at Red Shores Racetrack and Casino at the Charlottetown Driving Park on the final day of Old Home Week.

There are 11 dashes on tap with a 1 p.m. start time while the Monctonian Pace lines up in the afternoon finale.

Dr. Mitchell Downey drives his own Blood Money in the $3,300 Monctonian Pace from Post 3 for trainer Ellen Stevenson. The New Brunswick pacer stood stud on P.E.I. for the first part of 2022 and now has returned to his Saint John base. He makes the trek to Old Home Week to try his luck and hit the winner’s circle in the celebrated pace.

His main rival will be Post 2 starter Hardy Mill Joe from the Anthony Stymest barn. Hard Mill Stable of Beaver Bank co-owns the four-year-old son of Sportswriter with Ken Hardie of Bedford, N.S. Mike McGuigan drove the pacer to a 1:56.1 victory earlier in the week and will again sit in the race bike on Saturday. First Glance was an impressive front-end winner from the outside of the starting gate Monday evening for driver Brodie MacPhee and trainer Wade Myers and has Post 6 this time. The Lenny Myers stable has been hot lately and Poplar Artie has Post 7 with Marc Campbell in the bike after the driver steered the horse’s stablemate Acrobat Hanover to a 1:54.3 victory Thursday evening in the Joey and Dee Arsenault Memorial.

“Blood Money was put on the engine and led for part of it before settling for a third-place finish. Takes a dip and it will be green light go so expect him to be on or near the lead at the start and finish.”

Race 10 is the Chris MacPherson Memorial in honour of a beloved former Special Olympian and race fan. Downey will drive the favoured Father Ofthe Year from Post 6 in that dash.