The two three-year-old pacing fillies who are stablemates in the 'Nifty' Norman barn and who were 1-2 in the Shady Daisy Pace on Hambletonian Day came to The Downs at Mohegan Sun Pocono on Saturday afternoon, trying to earn spots in their upcoming Pennsylvania Sire Stakes Championship while racing in separate divisions.

The one who won on Hambo Day, Grace Hill, won again; the one who was second, last year’s national divisional champion Fire Start Hanover, did not, and the latter would now need great fortune to qualify for the Championship, which will be held with the other sophomore Championships at Pocono on Saturday, September 4.

Grace Hill was up first, and the daughter of Always B Miki secured a sure spot in the final with a sharp 1:49.3 victory. Andrew McCarthy put her on the lead and rolled down the road in :26.1, :54.3, and 1:22.2; 19-1 shot Chase Lounge, with George Brennan, gave a momentarily thrill when tipping to the Pocono Pike and gaining for a few steps, but Grace Hill dug in and retained a half-length lead at the wire. 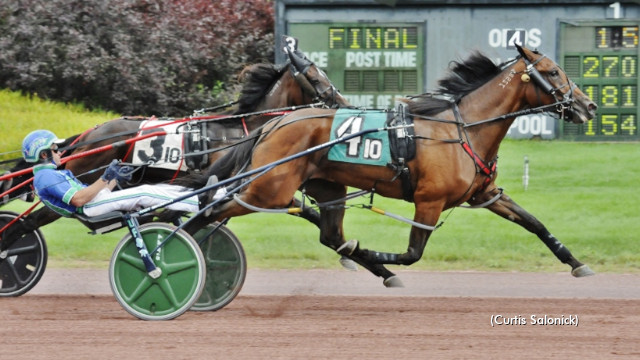 Fourth in two Sires prelims earlier, the peaking Grace Hill pushed her career earnings to $369,355 while getting a chance at the Championship for owner Tom Hill.

It was George Brennan, so close in the first division, who won the other cut in the Sire Stakes, with another daughter of Always B Miki, Mikala, equaling the 1:50.1 mark she earned while winning a previous Sire Stakes leg. Heavily favoured Fire Start Hanover took back and raced from last, coming her back half in :54.2 while wide most of the way, but in finishing second was no closer than 4-3/4 lengths to the 5-1 pacesetting Mikala, who cut fractions of :26.3, :55.3, and 1:23.1 prior to her :27 kicker. 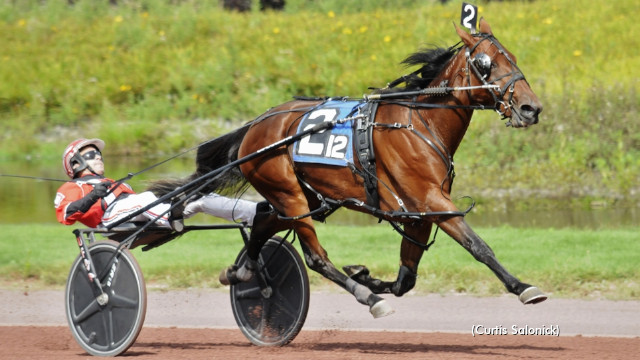 There were also three Stallion Series divisions full of fillies trying to earn a spot in their Championships, all eight of the Stallion Series finals taking place at Philly on Sunday, September 5.

Sire Always B Miki, who swept the Sire Stakes, also produced the co-fastest Stallion Series winner, as Nashville Elgenna (out of the storied mare Anndrovette) won in 1:51.1, popping out the pocket to pass pacesetter Podium Girl by 2-1/2 lengths. Andrew McCarthy, who won with Grace Hill, added a StS victory to his day for trainer Tony Alagna and Crawford Farms Racing.

Also scoring in 1:51.1 was the Captaintreacherous filly Mackie Hanover, who fought with challengers on both sides in the stretch before posting a nose decision over So Miki Hanover. Matt Kakaley drove the filly, earlier a 1:50 winner in the StS, for trainer Tom Fanning and owners Howard Taylor and Falcon Racing LLC.

The other Stallion Series divisional winner was the Betting Line filly Darby Hanover, who took a new mark of 1:51.3 with an easy triumph for driver Andy Miller, trainer Julie Miller, and the partnership of Andy Miller Stable Inc., Let It Ride Stables Inc., and Mr. Caroll Huffman.

Though he didn’t triumph in any of the stakes, Dexter Dunn guided home four overnight winners to lead the horsemen’s colony at The Downs.

Two-year-old pacers continue the Pennsylvania-sired stakes action the next two days, with Sunday’s 5:00 card finding the colts and action and Monday’s 12:30 program spotlighting the fillies. Program pages are or will be available at the PHHA website.