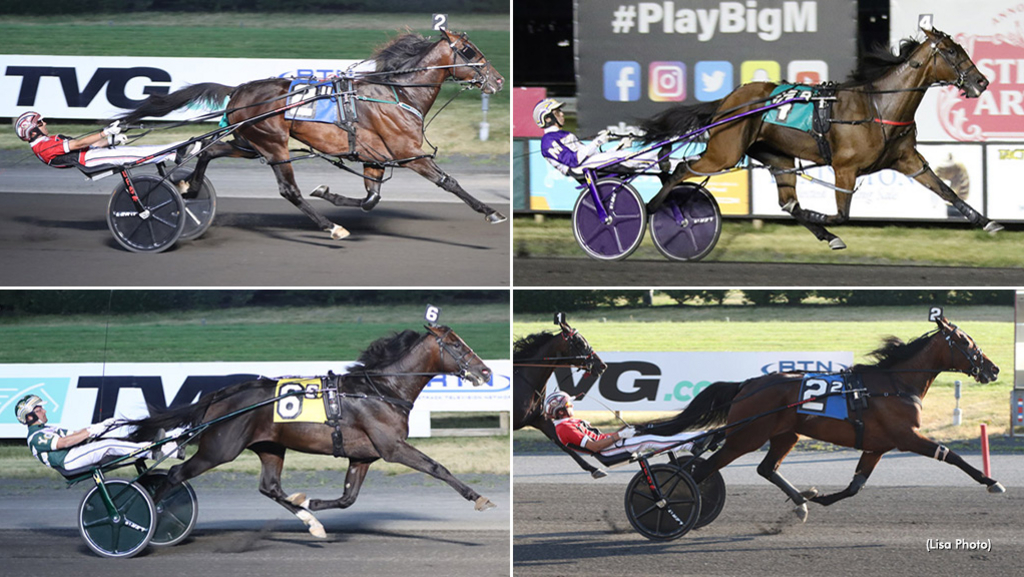 Fresh from his world record-equalling mile in the Roll With Joe Stakes, Bulldog Hanover put in another powerhouse performance to post a 1:46.1 mile in taking the $250,000 Graduate Pace Final on Saturday (July 9) at The Meadowlands. 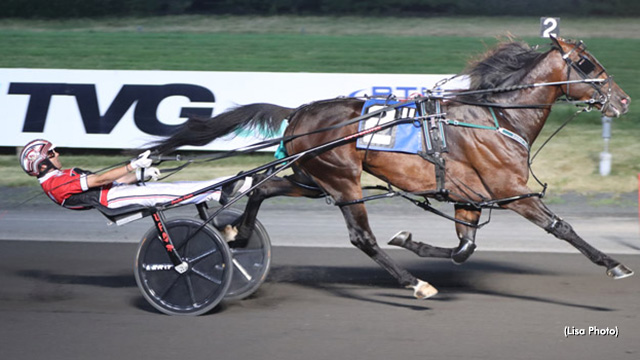 Bulldog Hanover again moved to do his work on the lead, this time clearing to the top after a :26.2 first quarter. But up the backside, another Canadian invader – Linedrive Hanover – flushed first over and blitzed the speedy pacesetter into a :54.1 half.

To the far turn, Bulldog Hanover parked Linedrive Hanover and spun for home off three-quarters in 1:20.1 again throttling to another gear. The Shadow Play stallion held his speed to the beam to just miss his record mark by a fifth of a second while besting a fast-closing Rockyroad Hanover by 1-1/2 lengths. Linedrive Hanover held third and Abuckabett Hanover took fourth.

“I knew there would be some leaving, but we just held our position there early,” Dexter Dunn said after the race. “We coasted to the front, the other ones took back, and he did all the rest. I was down in the end of the backstretch after the race trying to pull him up. I talked to Jody Jamieson, who drove him a lot back in Canada in his early career, and he just said he doesn’t get tired. And he’s right.”

The question then was posited to Dunn: can Bulldog Hanover break the 1:46 barrier?

“Your guess is as good as mine. But he’s got the potential to maybe hit it.”

Nonetheless, the victory – the 20th in his career from 28 starts – propelled Bulldog Hanover’s earnings to $1,221,196. He competes for owners Brad Grant and his primary trainer Jack Darling, who has his star housed with conditioner Noel Daley during his New Jersey campaign, through his Jack Darling Stables LTD. He paid $2.40 to win.

Reigning Dan Patch Horse of the Year Test Of Faith exacted revenge off a pair of strong tough-luck performances to dominate her peers in the $125,000 Graduate Series Final for pacing mares. 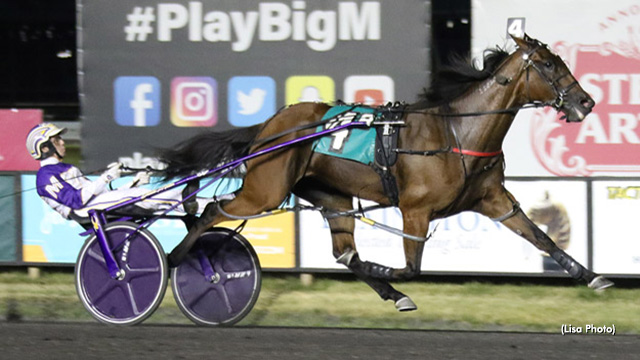 Fire Start Hanover protected position from the pylons to lead around the first turn as Test Of Faith and Mikala floated towards the front. Test Of Faith edged to sit slightly in the pocket, but risked getting locked at the pegs as Mikala loomed to her flank nearing a :27.4 first quarter. Driver David Miller reacted and squeezed the Brett Pelling pupil outside and attained the lead with Mikala applying pressure and pushing for a narrow lead into a :55.3 half.

Mikala may have bested Test Of Faith in a final-quarter sprint two weeks ago, but around the final turn Test Of Faith wrung her competitor on the rim in a far-turn hustle that clicked three-quarters in 1:22. Off the final turn, Test Of Faith vanquished her challenger and sprung for the finish, stopping the clock in 1:48.1 to win by 3-3/4 lengths. Fire Start Hanover slid through a seam at the pylons for second while Mikala held third and Grace Hill rallied down the center of the track for fourth.

“She had a post edge on the other two mares I thought I had to beat. I just wanted to make sure I wasn’t the last one to the front,” David Miller said after the race. “When Fire Start [Hanover] left really hard, I was just kind of waiting for them to make their move, but they were waiting for me. We ended up going :27.4 and :55.3 – at that point, I was like ‘You know what, she can do it from here.’

“I had a ton of confidence in her,” Miller also said. “Even if she had went harder to the half, I probably wouldn’t have let anyone go. She’s just an amazing horse. Brett has done a fantastic job keeping her sharp and I try my best to race her as easy as I can and aim her for the big races.”

Winning her 26th race from 33 starts, Test Of Faith has now amassed $1,872,276 for owners Melvin Segal, Kentuckiana Racing Stable and Eddie Gran. The daughter of Art Major returned $2.40 to win.

Star trotting mare Bella Bellini and trotting rising star Rattle My Cage raised their credit with dominant victories in their respective Graduate Trot finals on Saturday (July 9) at The Meadowlands. 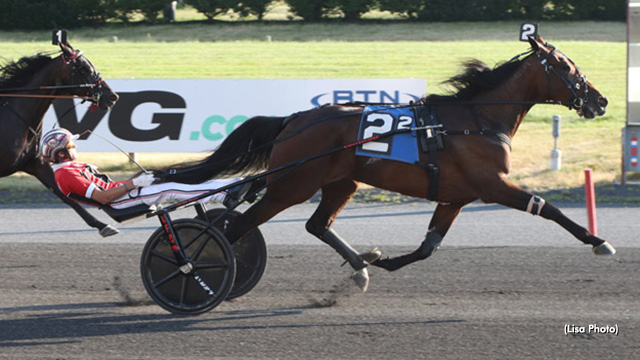 Bella Bellini coasted to a 1-1/2-length victory to win the $125,000 Graduate Series Final for trotting mares. She was the public choice at 1-9 against four others. Dexter Dunn was in the bike, guiding the daughter of Bar Hopping-Bella Dolce to her third straight win.

The field left the gate casually as HP Mama B, at 23-1, took the lead from the pylons with Bella Bellini settling behind her, followed by Cindy Michelle, Chablis and Herculisa, who quickly took over the third spot. The first quarter was a restful :28.2.

Rolling easily – all in a row – HP Mama B led the mares with no change in order to three-quarters in 1:24.4. Coming off the turn, Dunn eased out of the catbird seat and gunned Bella Bellini with a :26.1 final quarter to pass HP Mama B and win in 1:51.1.

"If there was a mastermind involved [to race her at four], it wasn't me,” said trainer Norman. “[Mr. McDuffee] loves to race, so here we are. She’s bigger and stronger, too, and she's loving her work. Like Dexter [Dunn] said, she's never been better.”

Bella Bellini paid $2.10 to win and place. There was no show betting.

Driver Dunn said he was happy to sit in the pocket until the late stretch. “The fractions really weren't worrying me because her kick is so fast. I was hoping David [Miller on Herculisa] didn't come too early but once we got past the half, [HP Mama B] marched on around the turn. We just had to wait into the stretch where I pulled her. It was a stroll for her tonight.”

Easily continuing domination of the division this season, Rattle My Cage scored his fourth straight win the $250,000 Graduate Final for trotting four-year-olds in 1:51. 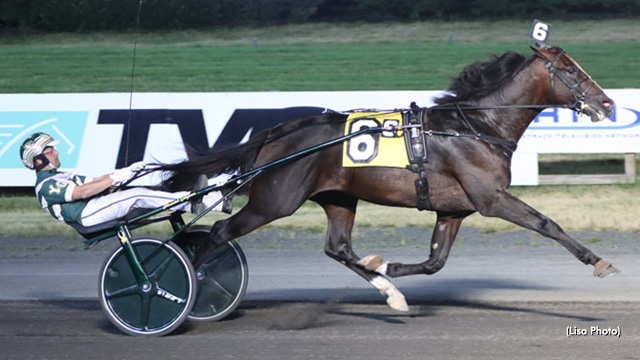 Yannick Gingras took the reins for trainer Ake Svanstedt and sat cold as Rattle My Cage cruised toward the lead to a :27.3 first quarter with Take All Comers yielding for the pocket. Rattle My Cage paved the path to victory with no challenges, cutting the half in :56.2 and three-quarters in 1:24.1 as he kept the rest of the field chasing him in progress to a 2-3/4-length victory.

Take All Comers gave pursuit from the pocket to hold second from a late-charging Ambassador Hanover, who ripped through traffic to nab stablemate Delayed Hanover for third.

"I'll take the easy one once in a while,” Gingras said about his trip in the race. "Going into the first turn, since the outside didn't leave, I figured the inside [horses] would be more than content to follow me. He had plenty left in the stretch. I knew he has another big race next week so I didn't want to do anything stupid." Rattle My Cage, he said, “couldn't be any better right now.”

Gingras drove the trotter at two and trained him before he qualified and guided him through baby races. “He had a world of ability,” he said. “He just wasn't mature. He has that French breeding in him (Love You-Caress The Senses), and we all take our time to get to our best, the French."

Rattle My Cage competes for owner Perry Soderberg and now has lifetime earnings of $282,029. He was sent postward as the favourite, paying $3.40 to win.