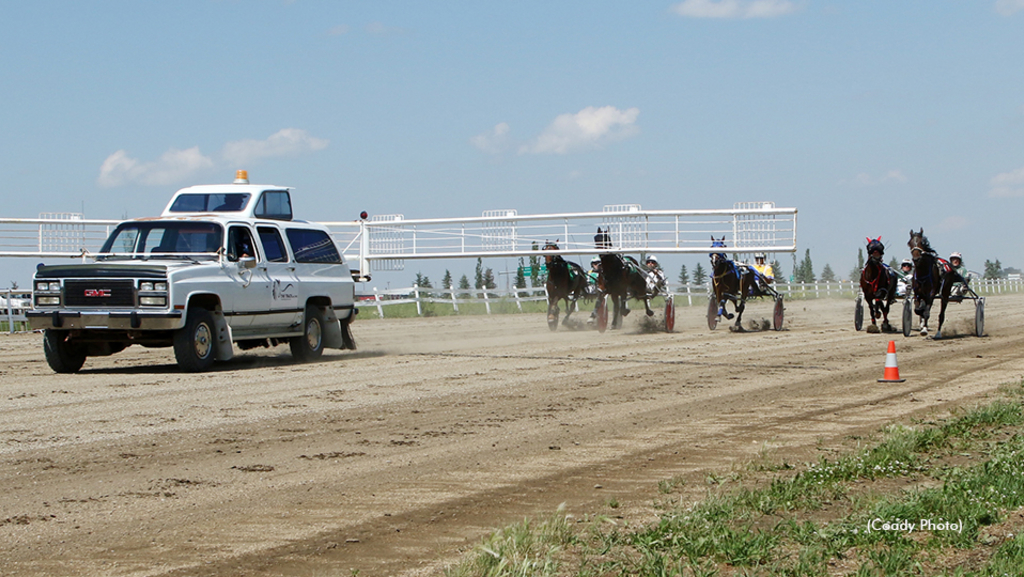 Two-year-old pacing gelding Lukes Proclamation turned in a track record performance at first asking at The Track On 2 on Sunday afternoon (July 31).

Driven by Nathan Sobey in a $4,400 maiden condition, the Doug Stout-trained Lukes Proclamation ($21.10) was gapped out in fourth-place through the first three-quarters of a mile before sprinting a :27.4 final quarter to reel in the runaway leader, three-year-old filly Hoffman Hanover, and win by 1-3/4 lengths in 1:57.1. Princessofthedawn, another three-year-old filly, finished second with freshman colt Imyourhuckleyberry closing impressively to finish third while Hoffman Hanover faded to fourth.

Bred by Meridian Farms, the Captive Audience-Shark Gone Bad gelding was a $17,000 yearling purchase from the ASHA Yearling Sale by Derek Stout of Camrose, Alta. He's a half-brother to Saturday's Preferred winner at Century Downs, the Vertical Horizon four-year-old Shark Week, who set a Century Downs track record during his own rookie season.

In other action, trainer/driver Dave Kelly swept the opening leg of the Funky Monkey Claiming Series with favourites Captain Fireball and Fire Ringo prevailing a pair of close finishes. The series is for $9,000 claimers (plus allowances).

Pick 6 Stable's Captain Fireball ($3.80) wore down pacesetter Litizor (Jamie Gray) in the $4,100 series opener to prevail by a half-length in 1:57.1, with Sky Walker (Brandon Campbell) less than a length behind off a pocket trip. The four-year-old Captaintreacherous gelding has won three of his last five starts.

Firm Ringo ($3.80) caught the slight second choice Witch Hunter (Brandon Campbell) at the finish line to win the second series split by a nose in 1:57.4. Mystery Prince (Mike Hennessy) followed one length behind in third after an early appearance on the lead. The four-year-old gelded son of Firm Belief made his Track On 2 debut a winning one for owner and B.C. horseman Jim Marino.

Kelly had a training triple during the afternoon's seven-race card, also scoring with Tropical Dragon ($3.70), and he made a total of four winner's circle appearances after driving another winner, No Collusion ($5.70), from the Lance Ward barn.