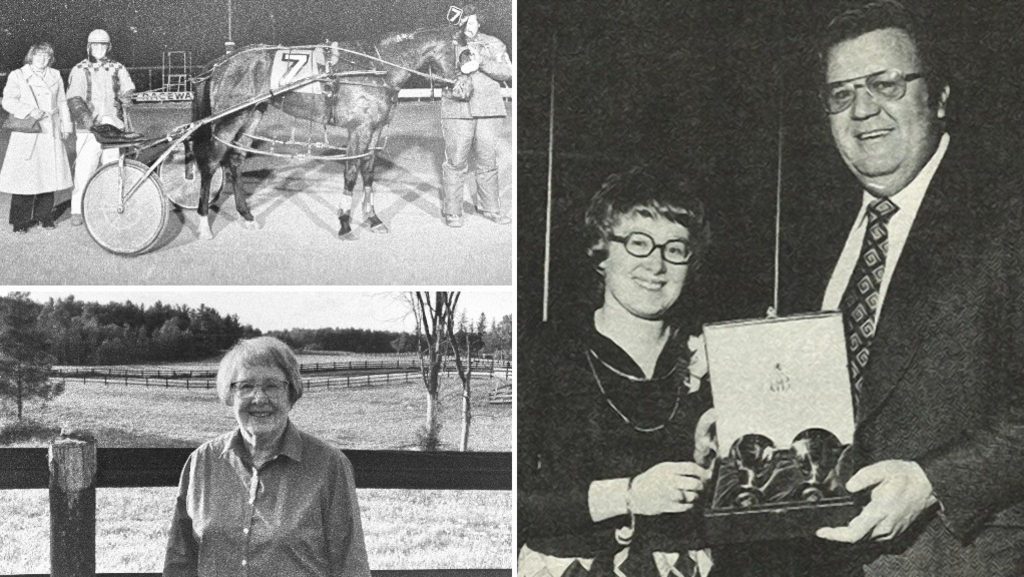 For this week's Rewind  Robert Smith has chosen to write a bit about a recently passed person who played  an integral part in the communications part of our sport for many years.  We said goodbye to Barbara A. Lennox, a lady who operated a very successful racing journal for many years.  Her publication closed a number of years ago but her memory and her past issues are very much in the background of today's historical recollections.

I, along with many in the world of harness racing, was very saddened to learn of the recent passing of Barb Lennox (Waples) on June 20th. She was in her 74th year.  Her lifelong involvement in our sport places her in rather select company as one who was a truly multi-talented person.  Although her personal style kept her somewhat out of the spotlight she managed to create a long and lasting legacy.  She had a unique way of accomplishing her goals in a quiet yet efficient manner.  Just a hunch,  but I think it may have been a family trait. 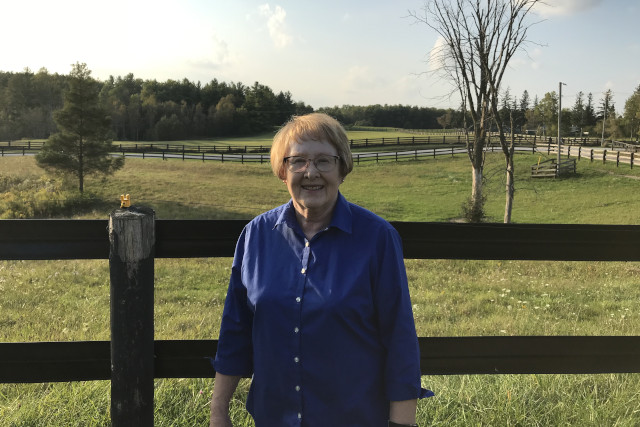 Barb Lennox is shown at her farm where she enjoyed many years of working with the horses she loved so dearly.

When Barb completed her formal education by graduating with an honours B.A. degree in English from The University of Guelph she chose a rather different career path.  At a very young age she decided to start her own business.  Her choice was not an easy one but undoubtedly one that she had given a lot of thought to and also had every intention of making it a success.  In time, her "dream" became a reality and her enterprising spirit came into full fruition.

Around 1971 Barb launched a new publication first known as "the Standardbred Record".  With minimal staff she began to publish a very small, yet "newsy" magazine.  As an indication of just how long ago this happened, the original annual subscription price was a princely $5.00.   Her timing proved to be excellent as just a couple of years into her fledgling venture the newly created Ontario Sires Stakes program came into existence.  With it came many new opportunities in not only reporting but also advertising and promotional possibilities.  Breeding farms and colt sellers were soon eager to advertise in the up-and-coming magazine.  The scope of her publication eventually covered stories from the U.S. and International scene as well.

As the magazine grew in popularity,  she expanded her staff and upgraded her finished product.  Barb soon became known for hiring younger staff members who may have lacked experience but possessed journalistic ability and an eagerness to learn.  Many remained for a lengthy stay and also went on to other endeavours. 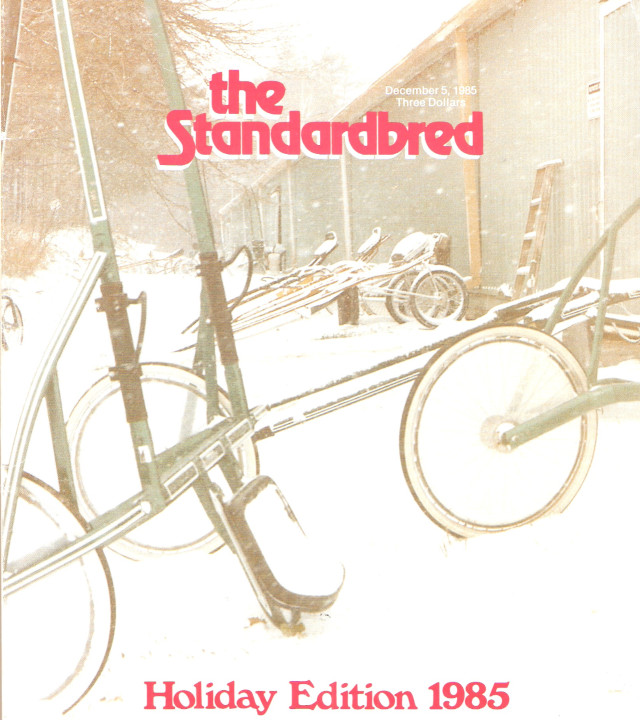 A front page view of the Standardbred magazine the creation of the late Barbara Lennox (Waples). Photo by Heather MacKay

Back about 40 years ago,  a fellow worker of mine told me that he had subscribed to a harness racing publication that he thought I might enjoy reading.  Although the name had changed slightly by then to "The Standardbred" he still referred to it by its original name.  After seeing one or two copies that he lent to me I was "hooked" in fairly short order.  When an article recalling the career of the late W.J. Hyatt, the man who started the once popular Supertest Stake races appeared in an issue, an idea occurred to me.

I wrote to Barb and asked if she would be interested in having someone write a regular column on "days gone by."  Based solely on my letter and a few back and forth notes (no emails in those long ago days) Barb accepted my suggestion and thus began "Looking Back" which became my start of published writing.  Who could have guessed how that would have turned out?

I did not get to know Barb overly well, mainly due to my freelance status and the distance,  but I did learn her style over time.  She was extremely fair and caring about those who worked for her.  I have told her a few times over the years that I felt as though "I worked with her rather than for her." I know that at the time of her passing, more than one of her former employees spoke of how well they had been treated and how grateful they remained  for the opportunity to work for her and hone their skills.

I am forever indebted to Barb for allowing me an opportunity to experience a long term hobby of writing about the past of harness racing and the many people who have been involved down through the years.  I have been extremely well treated by all members of the Waples family and will forever treasure the "chats" I had in very recent years with Keith.  I will close with what I think was a humorous little anecdote involving that famous yet very humble man.

A few years ago I contacted Barb to see if it would be OK if I phoned her Dad who, along with her Mom, was wintering in Florida at the time.  She said "of course I'm sure he would love to hear from you."  She added one cautionary bit of advice.  She said to be prepared for a very short conversation because "Dad doesn't like to talk on the phone."  Shortly thereafter I called him and while I didn't time the call I would say we easily chatted for 45 minutes!

When I read her obituary I couldn't help but think how thoughtful and kindly it was written, giving credit to those around her.  When I read that she was proud of the fact that a number of people who started out with her magazine had continued to promote the sport.  She had a way of encouraging others; that was her style.

Her passing is a sad event for her family and friends  but the legacy she leaves will live on in everyone she touched.  When I recently approached her sister Karen about the idea of dedicating an issue of Rewind to her she said " She was an incredible lady and her lifelong dedication to harness racing should be remembered. 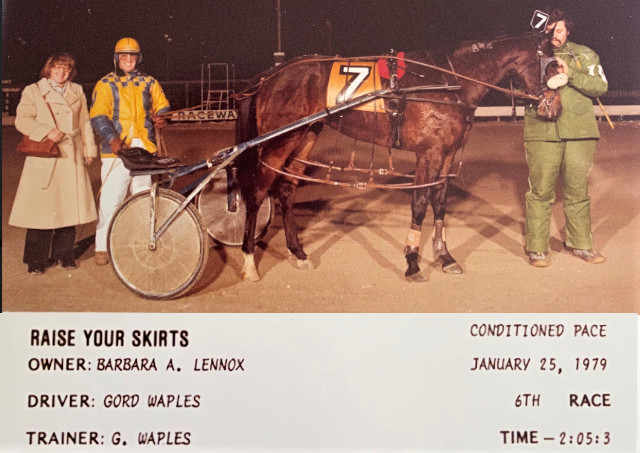 Barb was more than just an editor and publisher.  She also owned or co-owned many horses down through the years.  Above she appears in the Windsor winner's circle following a 1979 win with her own Raise Your Skirts in a division of the Ambassador Stakes.  Her trainer and driver was brother Gord Waples. 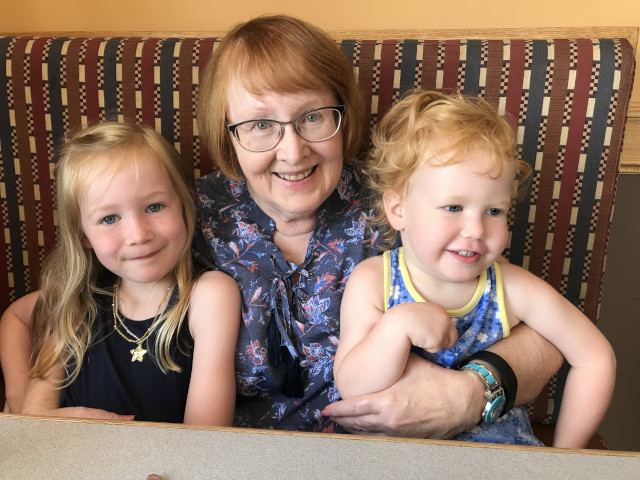 In her retirement years Barb thoroughly enjoyed her role as grandmother.  Here she appears with her two precious granddaughters Mara and Fiona McKinney. 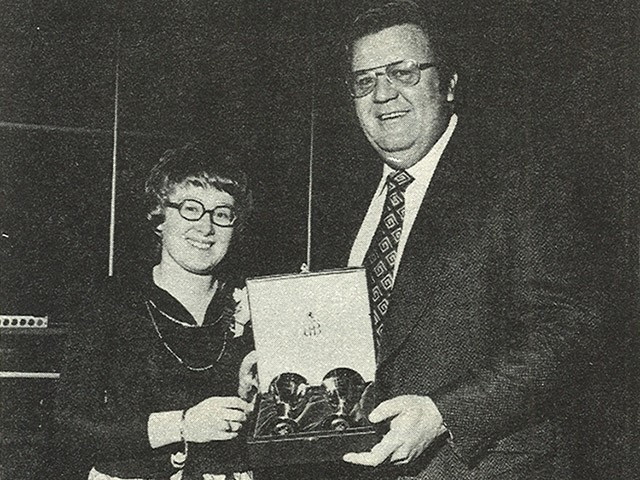 In this 1975 photo Barb makes a presentation  to the late Dr. Glen Brown at the annual C.T.A. awards night.  Dr. Brown was subbing for Duncan MacDonald, owner of Armbro Nesbit, named aged pacer of 1974. (TROT Magazine)

Quote For The Week: "Nothing is a bigger waste of time than regretting the past and worrying about the future." - James Meredith.

Who Is It and Where Is It? 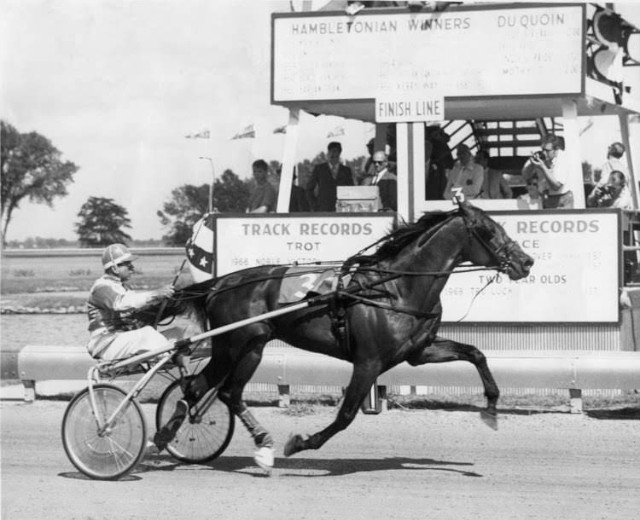 A bit of a carry over from a recent Rewind showing a judge's stand.  Where was this scene and who is the winning driver?

Who Else Is It? 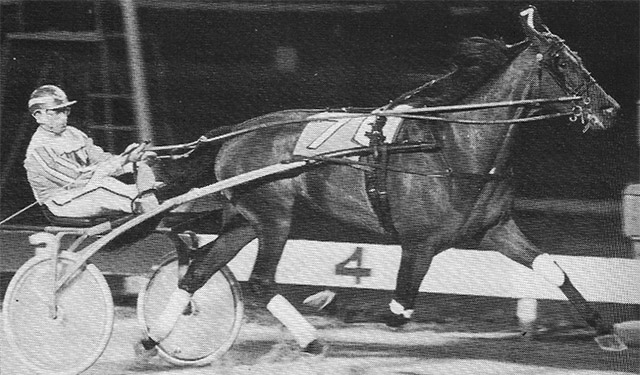 Can you identify this horse and driver? If you know the owner(s) let us know as well.  (Photo courtesy of the Standardbred magazine)

The correct answers for this week's pictures were as follows:
The winning horse in the picture taken in front of the DuQuoin Ill.   judge's stand  was  driven by Howard Beissinger as noted by several responders. The horse was Speedy Crown, winner of the 1971 Hambo.
The Who Else Is It? photo was the award winning trotter Fuschia driven by Larry Walker. This fine mare was owned by this week's subject Barb Lennox of Orton along with Donald Lawson of Georgetown, Ont.
Thanks to those who sent in their thoughtful comments.

Robert ,
A very well written thought provoking article about a truly remarkable woman who was ahead of her time. Barb knew what she wanted to accomplish in life and did so with dedication , determination and diligence. The horse racing industry most certainly owes a great deal to the Waples Family and Barbara in her own quiet , efficient , professional manner contributed immensely to that legacy . I was extremely fortunate to have counted Barb as a friend since we were both little kids . May she rest in peace !

Back in the day, it was my…

Back in the day, it was my pleasure and an honour to be the western reporter for Barbara's 'The Standardbred' magazine which she founded because she was also the editor and every edition was produced with accuracy and care. Barbara was a great boss, a great editor and a great human being.

photo 1 I believe is Howard Beissinger at the Du Quin state fair. 2 Larry Walker and Su Macs Review thank you Robert for another rewind Donnie Rankin

Another very good column again this week. Thank you Robert. The 1st guess is Howard Beissinger, I think at Duquoin with maybe Super Gill. The 2nd one obviously is Larry Walker but I don't know the horse. I do enjoy your efforts. Thanks again. John

Who is it Howard Bessinger…

Who is it Howard Bessinger at Du Quoin and Speedy Crown

Who else is it Larry Walker