The richest race of the season at Saratoga Casino Hotel yielded a track record performance on Tuesday (July 20).

There was one division of the New York Sire Stakes for three-year-old colt and gelding trotters on Tuesday and the $156,600 race saw the favourite not only thrive but make history.

Ahundreddollarbill (Chapter Seven-Swinging Royalty) drew post seven in the eight-horse stakes event but driver Andrew McCarthy wasted very little time moving the 1-5 betting favourite out to the front end. The speedy sophomore powered through a first quarter in :27.1 before reaching the half in :56.1. The Tony Alagna trainee made it look easy as he cruised to a well-measured length and a half victory to record his sixth win in seven starts in 2021, tripping the timer in 1:54. 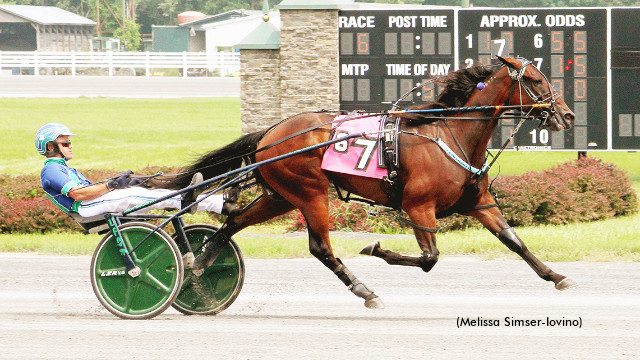 Dewey Arnold (Jason Bartlett) sat the pocket to the winner and finished a strong second to continue his breakout campaign while Balenciaga (Wally Hennessey) earned the show spot. Ahundreddollarbill now has seasonal earnings of over $310,000 for owners Crawford Farms Racing of Syracuse, N.Y. and James Crawford IV of Erieville, N.Y.

The final time serves as a new track record for a three-year-old gelding trotter as it lowers the previous mark set by Dayson and Yannick Gingras in August of 2016. It is the third different performance this season in which he has set a track record as he lowered the mark at Vernon Downs and at Yonkers Raceway previous to Tuesday’s record-setting performance at the Spa.

Live harness racing resumes on Saturday evening at Saratoga when the 12th annual Joe Gerrity Jr. Memorial Pace highlights a 15-race program. The Gerrity attracts some of the top pacers in North America and will be contested for a purse of $150,000. First post time is set for 6:45 p.m.