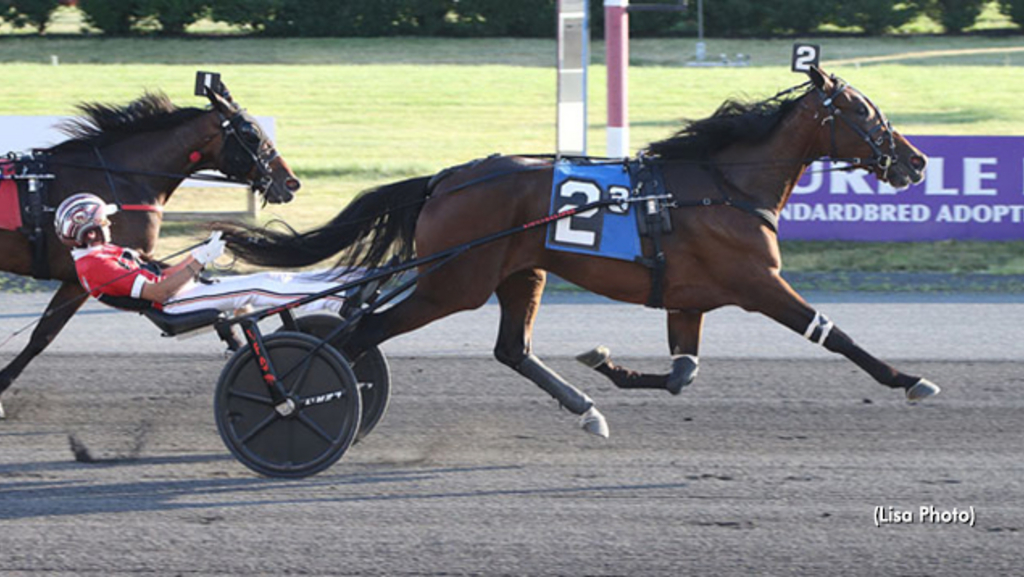 Bella Bellini and driver Dexter Dunn rallied in the stretch to overtake When Dovescry and win Saturday’s (July 2) $131,250 Six Pack Mares Open Trot by one length in a career-best 1:50.1 at The Meadowlands.

Bella Bellini, a four-year-old mare winning for the third time in her past four starts, was fourth throughout most of the mile. Next Level Stuff led the field to the opening quarter in :27, then yielded the front briefly to Weslynn Quest on the backstretch but was back on top at the half in :54.1.

Heading around the final turn, Next Level Stuff remained in front, but When Dovescry and driver David Miller were making a first-over move and Bella Bellini followed their cover. When they reached the stretch, When Dovescry took the lead but was unable to hold off Bella Bellini, who covered the last quarter in :26.2.

“She is really, really fast,” winning driver Dexter Dunn said about Bella Bellini. “Once we found David’s helmet, it was a good helmet to follow, and it took me right into the stretch. Once you tip her off a helmet, she really explodes. She did the rest. It couldn’t have worked out any better.

“Tonight, to be honest, is probably the sharpest she’s felt all year. It’s exciting. I just have to try to get her in the right spots and let her show her speed.”

Bella Bellini is trained by Richard “Nifty” Norman for breeder-owner David McDuffee. The daughter of Bar Hopping-Bella Dolce has won three of seven starts this year and 14 of 33 lifetime, earning $1.29 million.

Last year, Bella Bellini won 11 of 19 races, missed the board only once, and received the Dan Patch Award for best three-year-old female trotter. He wins included the Hambletonian Oaks and Breeders Crown, both at The Meadowlands.

She was winless in seven starts at age two.

“I think she’s gained a step, to be honest,” Dunn said about Bella Bellini’s improvement this season. “She’s been really good this year. She actually grew a lot from her three-year-old year, and she looks amazing. She obviously improved a lot from two to three, so I’m hoping for the same thing. She’s really hitting her stride.”

Sent off as the 8-5 co-favourite with When Dovescry, Bella Bellini paid $5.40 to win.