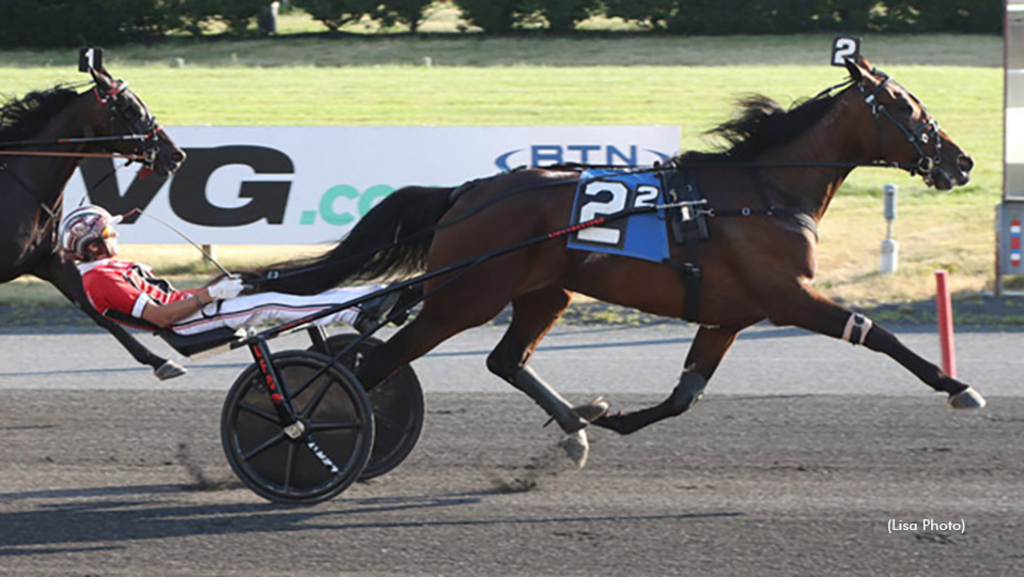 Recently crowned Graduate Series champions Bella Bellini and Rattle My Cage will put win streaks on the line when they lead a field of 11 horses into Saturday’s $432,000 E.T. Gerry Jr. Hambletonian Maturity for four-year-old trotters at The Meadowlands. The race will be contested at 1-1/8 miles.

Bella Bellini, who won last year’s Hambletonian Oaks and brings a three-race win streak into Saturday’s contest, is the 3-1 morning-line favourite. She is the only female in the race and will start from the trailing position, post 11, in the 1-1/8 miles event.

Last week, Bella Bellini won the Graduate Series final for four-year-old mares in 1:51.1 at The Meadowlands. After going winless in seven starts at age two, she has captured 15 of 27 races and finished worse than third only once during that span. She has earned $1.36 million lifetime for breeder/owner David McDuffee and trainer Richard “Nifty” Norman.

Regular driver Dexter Dunn will be in the sulky for Bella Bellini, a daughter of Bar Hopping-Bella Dolce who received the 2021 Dan Patch Award for best three-year-old trotting filly.

A mare has won two of the eight editions of the Hambletonian Maturity, with Hannelore Hanover taking the title in 2016 and Ariana G winning in 2018.

“I don’t mind the trailing spot in a mile and an eighth, but she’ll have to get lucky,” Norman said. “She’ll have to get out somehow and she’ll have to race her best. That’s how she races her best; if she gets out late, she’s pretty tough to hold off. We have to hope for a good trip and that things work out.”

Rattle My Cage enters the Maturity with a four-race win streak and is a neck from being unbeaten in five 2022 starts. Last week, the stallion won the Graduate Series Open Trot final in 1:51. He will start from post eight with Yannick Gingras driving for trainer Ake Svanstedt and owner Perry Soderberg. He is the 7-2 second choice on the morning line.

“We have an outside post, but he’s good and he’s tough,” Svanstedt said. “Yannick said he had something left last time, so we’ll see what he can do.”

Rattle My Cage, a son of Love You-Caress The Senses, has won eight of 23 career races.

“He grew a lot over the winter and spring,” Svanstedt said. “He trained back good and qualified good, so I expected good performances from him. I’m not surprised. When you see a horse growing taller and wider, you can expect a better performance than before. He is stronger and faster now. He is very good.”

Svanstedt, who won the inaugural Hambletonian Maturity with Your So Vain in 2014, will send out three other starters in the Maturity: Ambassador Hanover (6-1 morning line), Incommunicado (12-1) and Delayed Hanover (15-1).

Ambassador Hanover finished third in the Graduate Series Open final and will start the Maturity from post three with driver Scott Zeron.

Graduate Series Open runner-up Take All Comers will start from post seven in the Maturity and is 10-1. Tim Tetrick will drive for trainer Jim Campbell. The two teamed up to win the 2019 Maturity with Crystal Fashion.

Take All Comers has won five of 28 career races and earned $476,631. He has earned a paycheque in all but three of his starts.

“We were very happy with his performance last week and he’s had a good week,” Campbell said. “With this race, you just have to hope you get a good trip with the added distance. But he’s been a real nice horse for us. He gives you a good effort every time. He wants to do it. If he does show a bad race, there is usually an excuse for it. It’s not him just taking the night off or anything like that.”

“It’s a tough group of horses,” Campbell said. “Obviously, Rattle My Cage was very impressive last week, but there are lots of them in there that have shown they can go. You’re finding that in most classes now; there’s not just one or two horses that maybe dominate. There’s a bunch of them.”

The E.T. Gerry Jr. Hambletonian Maturity is Race 11 on Saturday.

All of the major events on the program will be shown live to a national television audience on Fox Sports 2 (FS2). The show will be broadcast from 8-11 p.m. (EDT).

On-track fans can ride the mechanical shark, practice their axe throwing, bounce around in some action-packed inflatables party with DJ aalex and enter to win a $500 win wager from 5-11 p.m.  Fans can also grab a free “settin’ the pace” t-shirt while supplies last and play carnival games for cool prizes.

Nick Luciano, Blake Moore, Roy Dinges and Beau Deatrick from Tratter Co will also be onsite for a meet and greet from 6-6:30 p.m. near the winner's circle.

The Meadowlands is also hosting its annual 30 & Under Handicapping. The free handicapping contest is exclusively for fans between the ages of 18 and 30. The contest offers a $5,000 total prize pool, with prize payouts to the top five finishers. Fans may register up until 6:30 p.m. on the night of the contest at the Backyard registration table. There is no entry fee. The contest format requires players to make a mythical $2 "across the board" wager on one horse in Races 2-10 at the Meadowlands. The winner is determined by the player that amasses the largest mythical bankroll from their selections. All contest participants will receive a free program, $10 betting voucher and treated to free BBQ from the Backyard BBQ & Grill.

TrackMaster past performances for all Meadowlands cards can be found at the track’s website.

(With files from USTA and Meadowlands Racetrack)