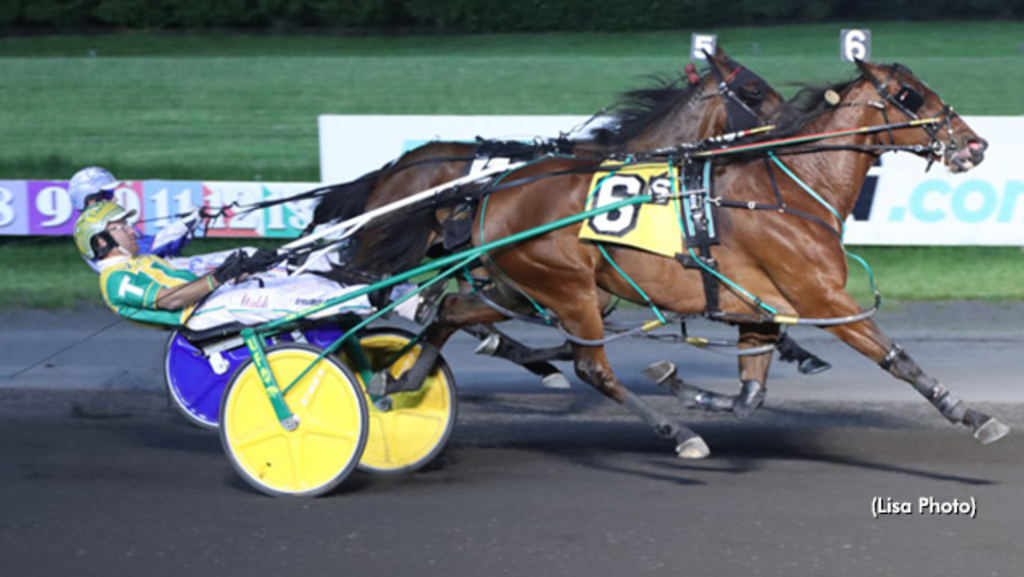 Lyons Sentinel and Bella Bellini both pulled off last-to-first victories Saturday night (June 4) at The Meadowlands while taking the $31,500 co-features on the pace and trot, respectively.

A seventh-place finisher in her seasonal debut in the Betsy Ross earlier in the week, Lyons Sentinel was taken back to last in the six-horse Open for fillies and mares on the pace, and spent much of the race there.

Chase Lounge used the pylon post to her advantage to take the lead at the quarter in :26.3, before a bold brush by 2-1 second choice No Win No Feed A saw that one make the top while parked to the half in :54.3.

Lyons Sentinel vacated the pegs from sixth at the five-eighths, getting a live tow from Keep Rockin A as No Win No Feed A hit three-quarters in 1:22 while on a 2-1/4-length lead, seemingly on her way to an upset score.

But Lyons Sentinel wasn’t into that.

Staying with her cover until the eighth pole, the five-year-old daughter of Captaintreacherous-Tutu Hanover charged past the leader in deep stretch on the way to recording a half-length win in 1:49. No Win No Feed A was second with Keep Rockin A third.

“I gotta say,” said Joanne Looney-King, the wife of winning trainer Jim King Jr. “[Driver] Timmy [Tetrick] and Jimmy know what they are doing but when she was last off the turn, I thought, this doesn’t look good.”

But the stable’s Queen came through with flying colors by flying home through the stretch.

“It took a little longer for her to get ready this year,” said Looney-King. “She was a couple of hundred pounds overweight. She trained well before the Betsy Ross, but that race was a mess for her. Now, she’s ready to roll. We are heading to Canada for the Milton.”

As the 1-2 public choice, Lyons Sentinel, the defending O'Brien and Dan Patch Mare Pacer of the Year, returned $3 to win while upping her gaudy lifetime stats to 23 wins from 49 starts, good for earnings of $2,198,272.

The Open for trotters provided a mild upset, as 2021 Hambletonian Oaks champion Bella Bellini gunned down 2018 Trotter of the Year Atlanta after a thrilling stretch drive by a head in a lifetime-best 1:51.2.

Lindy The Great pushed the gate away from post six in the six-horse field and sprinted to the top in :27.3 as 1-2 favourite Atlanta and 2-1 second choice Bella Bellini were away fifth and sixth, respectively.

Lindy The Great was permitted to back the half down to :56.1 before Eurobond popped out of the four hole to begin the cover flow, as Atlanta went second-over with Bella Bellini tracking her.

After reaching three-quarters in 1:24.3, Lindy The Great was still the boss, but the field was closing in. Atlanta tipped off her cover and packed plenty of punch for the stretch drive, but Bella Bellini delivered the knockout blow after racing widest of all sprinting home in :25.4 to get her first win of the season in four tries. Eurobond was third. 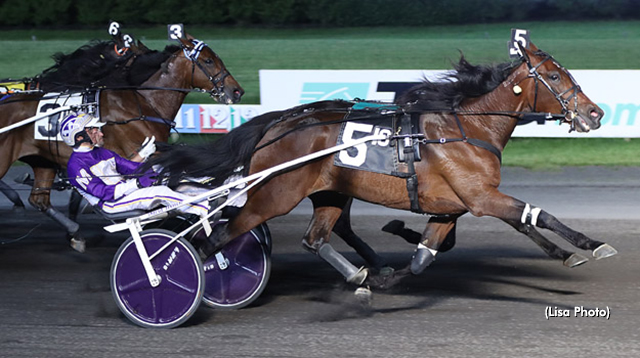 “I was a bit surprised that we got by Atlanta,” said winning driver Dave Miller. “I’m sure tonight they were using the race as a tightener, but she raced really great. What an explosive kick she had. I wasn’t all that happy when Eurobond moved, I would have preferred to follow Atlanta second-over and take my chances. But my horse raced big tonight.”

The winner is a daughter of Bar Hopping-Bella Dolce, who Miller thinks can do great things. So, can this four-year-old go up against older foes and be successful moving forward? “Definitely,” said Miller.

A LITTLE MORE: Tetrick had the hot hand among the drivers, visiting the winner’s circle four times on the card.

Edison Hatter, keyed by a Pick-3 score that totaled $1,802.50, turned his $500 bankroll into $2,152.50 to win the second installment of the track’s “Battle of The Masterminds” handicapping challenge.

It was a night for value players as only one post-time public choice, Lyons Sentinel, emerged victorious on the 13-race program.