If Continualou had sneaked a peek to her left while she was charging through the lane Saturday (June 5) at The Meadows, she might have noticed that the horse gaining on her her was her stablemate, Blue Diamond Eyes. But Continualou gave no quarter, edging Blue Diamond Eyes by a nose for her second-straight Pennsylvania Sires Stake win.

The $149,532 event for sophomore filly pacers, known as the Adios Betty, was contested over two divisions with Mikala taking the other split.

Blue Diamond Eyes circled the field from post 6 for the early lead, but when Continualou quarter-poled to the top for Ronnie Wrenn, Jr., it appeared she had he field where she wanted it. Yet the daughter of Sweet Lou-Continual Velocity, a homebred for Burke Racing Stable and Weaver Bruscemi LLC, needed a :27.4 final quarter to score in 1:51 and hold off her stablemate by a nose. Incaseyoudidntknow completed the ticket. 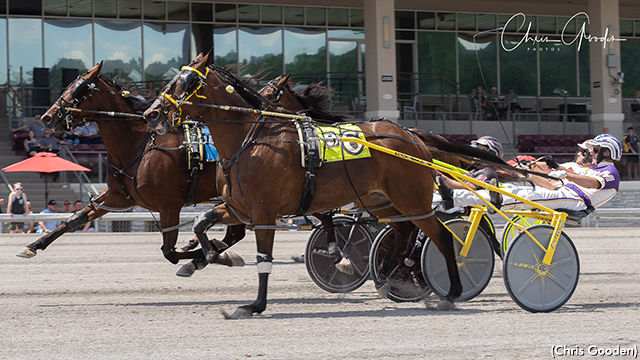 “It’s a great feeling to win with a homebred, and that’s a great filly she beat,” said trainer Ron Burke of Continualou, who soared over $300,000 in career earnings. “She just keeps getting better and better — maybe over-achieving. I don’t know that she’s sharper than Blue Diamond Eyes, but she’s had easier trips. Before this year’s over, Blue Diamond Eyes will be heard from.”

A five-race maiden entering The Adios Betty, Mikala moved willingly second over for George Brennan and roared wide through the stretch to win in 1:50.1. Early leader Thebeachiscalling finished second, one-and-a-quarter lengths back, with Marsala Hanover third.

Winning trainer Nik Drennan said he liked the way the race set up for the daughter of Always B Miki-Shes Some Treasure, an $180,000 yearling acquisition at Lexington for Joseph Davino, Brad Shackman, Anthony Perretti Farm and Drennan Stable.

“She had a perfect trip,” Drennan said. “Her last couple starts, she’s closed pretty well. She likes to run horses down. She’s progressed immensely from 2 to 3. She’s bred unbelievable; I thought she was one of the best fillies in the sale. She’ll go next to the Lady Maud at Yonkers.”

Tony Hall gave Classicist a pocket trip but said there was no guarantee that would be the best spot for the daughter of Captain Treacherous-Mother of Art.

“She’s been aggressive before, so they added a mini-bit. I was very thankful to have it today in that position,” Hall said. “She was really loaded and finished up strong. She wasn’t stretched out at all, and she still seemed to have something left.”