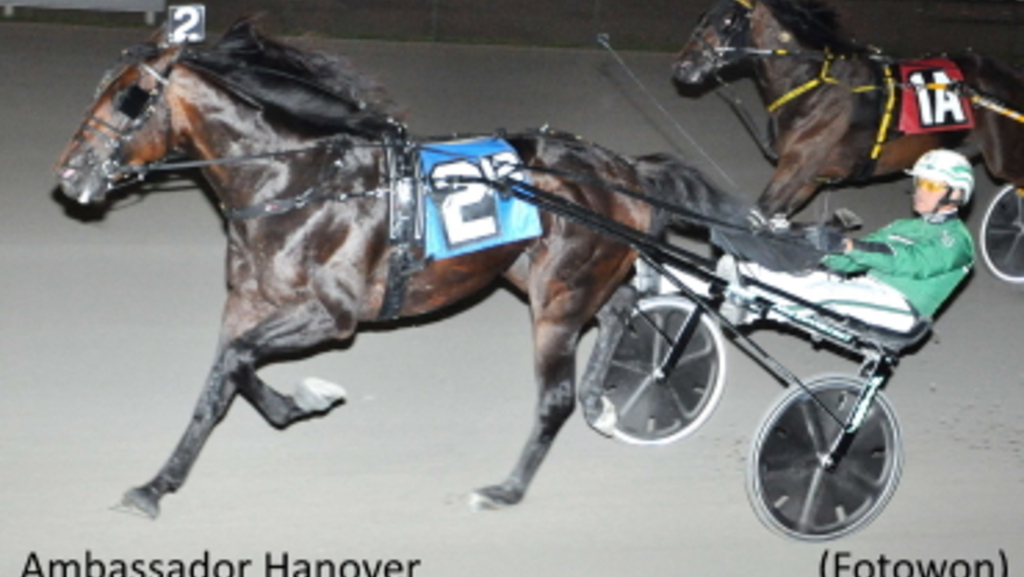 Four divisions of the New York Sires Stakes for three-year-old trotting colts and geldings went postward Friday evening at Vernon Downs, and it turned out to be a big night for sons of Chapter Seven.

That sire produced three of the divisional winners on the card including Ahundreddollarbill, who rolled to a 1:52.2 triumph in his $56,000 assignment.

Andrew McCarthy parked through an opening quarter of :27.2 before finding the lead with the Tony Alagna trainee. Once in charge, the youngster sailed through middle splits of :56 and 1:24.4 before using a :27.3 closing panel to seal the deal. He held on to win by one-quarter of a length over Incommunicado. Dewey Arnold was third.

It was the second straight score for the four-time winner who surpassed $100,000 in career earnings with the win. He is owned by Crawford Farms Racing and James Crawford.

Ambassador Hanover gave Chapter Seven the sweep of the colt divisions with his 1:53 victory in the $57,000 final division.

Trainer/driver Ake Svanstedt got away third while Balenciaga sliced out an opening quarter in :27. Credit Con took charge in the second quarter and had the field chasing him past the half in :56.3. Svanstedt revved up the engine on his charge in the third quarter, and it resulted in Ambassador Hanover brushing to the top and then laying down a third panel of 1:25. He iced the cake with a :28-second closing panel and wound up winning by 1-1/2 lengths over Balenciaga with Latin Lover another length back in third.

Ake Svanstedt Inc, Order By Stable, Howard Taylor and Judith Taylor share ownership on the talented trotter who is now 1-for-2 on the season after going 4-for-6 in his freshman campaign. He’s banked more than $160,000 to date.

Iteration kicked off the proceedings for the fillies with a 1:54 triumph, and again Chapter Seven was the proud papa.

Brian Sears had the Marcus Melander trainee on the lead at the opening quarter of :27.1 before relinquishing the top spot to Sweeping Rainbow. That foe sliced out middle splits of :57 and 1:26.1 before being confronted and overtaken by Iteration in the lane. Iteration used a :27.3 final frame to win by a neck over Sweeping Rainbow. Third prize went to Aela Jamieson.

It was an eye-catching start to the 2021 season for the sophomore who went 5-for-10 as a rookie while banking over $315,000 for Courant Inc of Delray Beach, FL.

Moni For Lindy and driver Wally Hennessey erupted for a 21-1 upset in the other filly division thanks to a 1:53.4 score over heavily favoured Darlene Hanover.

Hennessey got away fourth with the daughter of Credit Winner while Illuminata fired to the top and served up an opening quarter clocked in :27.1. Soukup Blue Chip was parked past the first post, but brushed to the top in the second quarter before rolling the field to the mid-way point in :56.1 and then the three-quarter pole in 1:25.4. Moni For Lindy then rallied in the late stages of the contest, and her :27.2 final frame earned her the win by 1-1/4 lengths over Darlene Hanover. Contested Hanover was third.

Domenico Cecere conditions the three-time winner for Moni Maker Stable of Enfield, CT. The lion’s share of the loot lifted her lifetime earnings over $100,000.