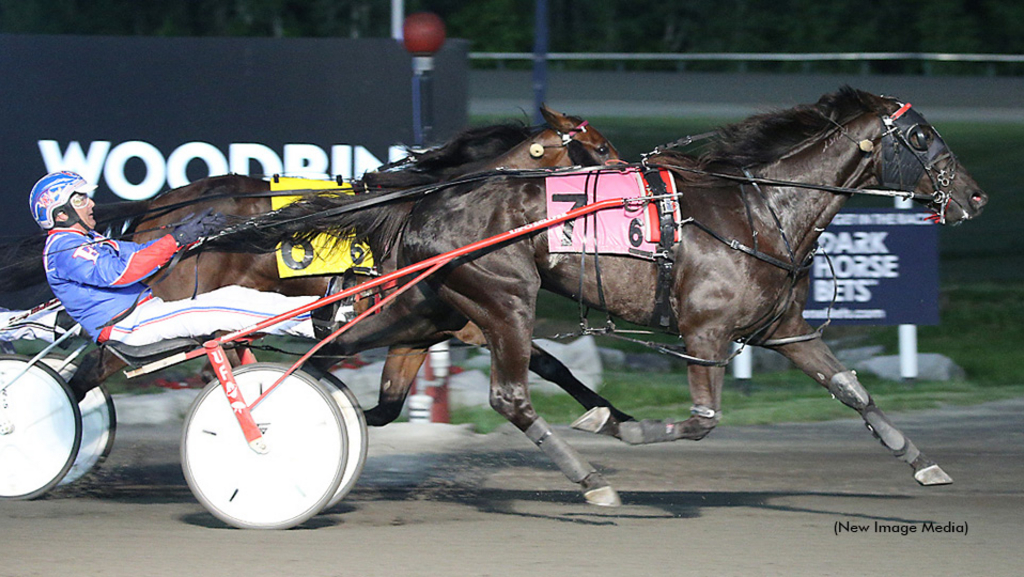 Launching late from the pocket, Logan Park pulled off a 13-1 upset in the $93,750 second leg of the Graduate Series for four-year-old trotters on Friday night (June 3) at Woodbine Mohawk Park.

Driven by Sylvain Filion, Logan Park fired to command from the far outside to lead his six foes early on before a parked out Take All Comers (Doug McNair) worked his way to the top after the :27.3 opening quarter.

Take All Comers led the trotters through middle splits of :56 and 1:24.2 with the popular 2020 Mohawk Million champion Venerate (Andy Miller) making first-over gains until they turned for home.

Instead Logan Park launched from the pocket to snatch the victory from Take All Comers in the final strides, stopping the clock in 1:53 flat. Take All Comers finished a half-length behind in second with Inaminute Hanover (Bob McClure) following in third. Mycrownmykingdom (Scott Young) finished fourth over Venerate.

An O'Brien Award runner-up last year after winning five of his 15 sophomore starts and earning more than $366,000, Ontario Sires Stakes graduate Logan Park was back in the spotlight winning the third start of his four-year-old campaign.

Rob Fellows trains the Archangel-Rite Outa The Park gelding, who now has eight career wins from 29 starts and went over the $500,000 mark in earnings, for Outofthepark Stable of Rockwood, Ont., breeder Reg Higgs of Strathroy, Ont., and Arpad Szabo of Bradford, Ont.

The series opened with a 15-1 upset as Vicious Aloicious ($33.10) went first-over from fourth in the final turn to take command down the stretch and held off 7-5 favourite Pipewrench Charlie, who closed off his cover, by three-quarters of a length in 1:52.1 with James MacDonald aboard for trainer Joe Pereira. Lyons Johnnyjnr finished third off a pocket trip. Claimed for $9,000 on April 25 at Mohawk, the eight-year-old Always A Virgin gelding is owned by James Barry and now has four wins from 14 starts this year.

The 3-5 favoured Richard Moreau trainee Shadow In Red ($2.90) and driver Sylvain Filion led all the way to win the second division by a neck over the pocket-popping Hervey Hanover in 1:51.3, with third prize going to Dragon Energy.. The five-year-old gelded son of Shadow Play picked up his first win of the season from 18 starts for owner Macks Stable.

Dontpokethedragon ($5.30), the 8-5 second choice, retook the lead at the three-eighths mark and held clear of the late-closing, even-money favourite Springbridge Jim to win the final division in 1:52 flat for Team Cullen -- trainer Jodie and driver Travis, who co-owns the five-year-old Custard The Dragon gelding with J J J Stables and Paul Sanders. Mr Mach Jimmy finished back in third. The win was the first of the season from 11 starts for the 2021 Jim Vinnell Memorial Stakes champion.