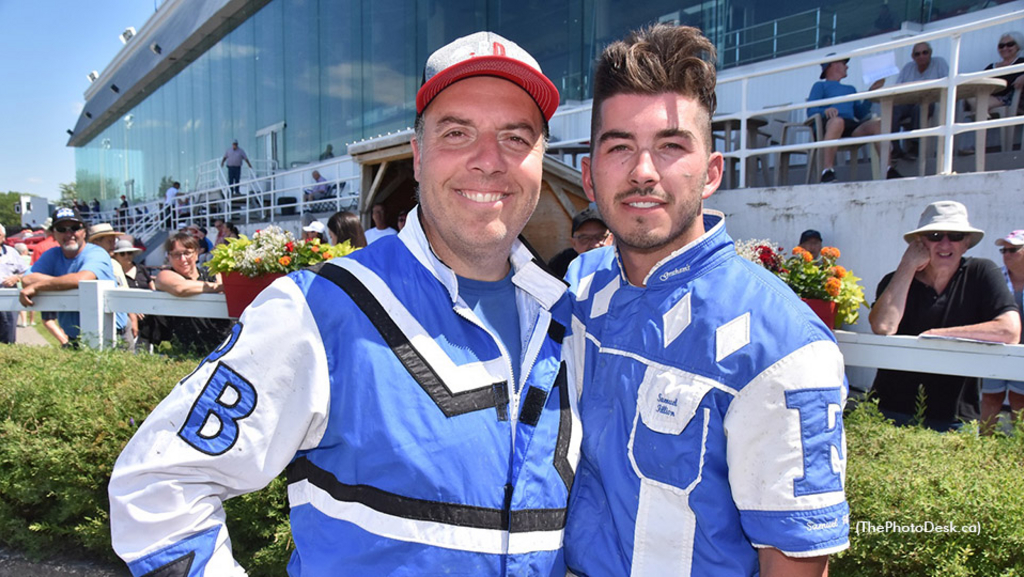 The winner and runner-up will join the top two finishers from the three other regional qualifiers at the 2022 National Driving Championship (NDC) at Century Mile on Thursday, Nov. 24 to compete for the opportunity to represent Canada in the 2023 World Driving Championship in Italy.

Fillion ended the eight-race competition with 61 points to overtake Pascal Berube, who was also a three-race winner and had held the lead until the finale. Berube and a consistent Guy Gagnon, a three-time Regional champion who had one win on Sunday, tied in the standings for second with 50 points each. With more driving wins in the QEORDC, Berube will advance to the NDC with Fillion.

"I came here confident. I knew that my colleagues were motivated to win too," said Fillion, adding that he is very happy to punch his ticket to the NDC. "Thank you for this tournament."

A 1:58 track record victory by three-year-old trotting filly Stella Alpha ($4.40) put Fillion in contention early on following back-to-back wins by Berube in the opening legs. His second win in the sixth leg aboard Fancy Girl ($5) moved him to second-place in the standings and he was left chasing after Berube, who earned another victory later with Mach Play ($2.50). 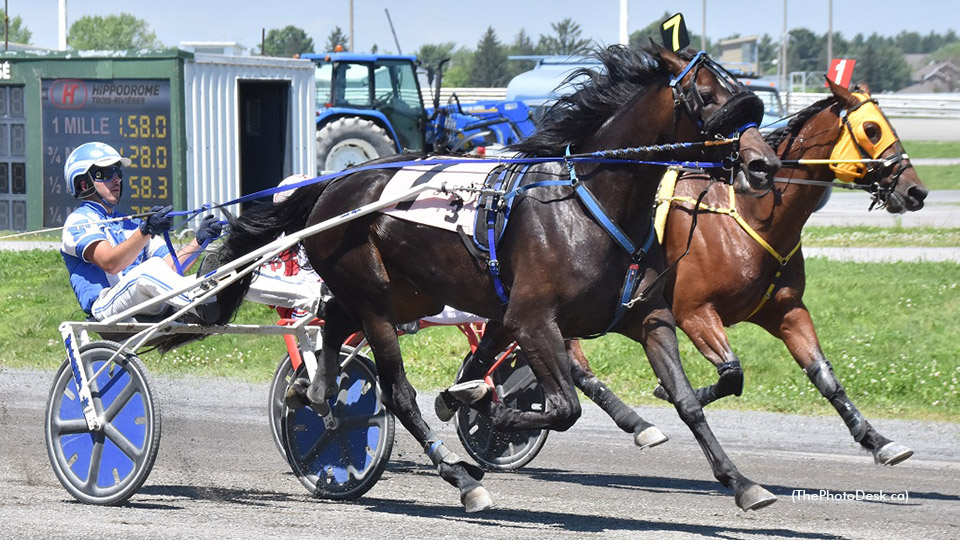 Samuel Fillion winning his first race of the day with Stella Alpha in a track record performance.

With Berube sitting out for the finale, Fillion clinched the QEORDC title with a victory in rein to 6-5 favourite D Gs De Vito ($4.40). The Guylaine Fortin trainee swept from third to first after a contested :27 opening quarter in the $6,000 Preferred 2 & 3 Handicap Pace then shook off a challenge from Siddhartha and Gagnon through splits of :55.3 and 1:23.4 to score going away in 1:52.1. 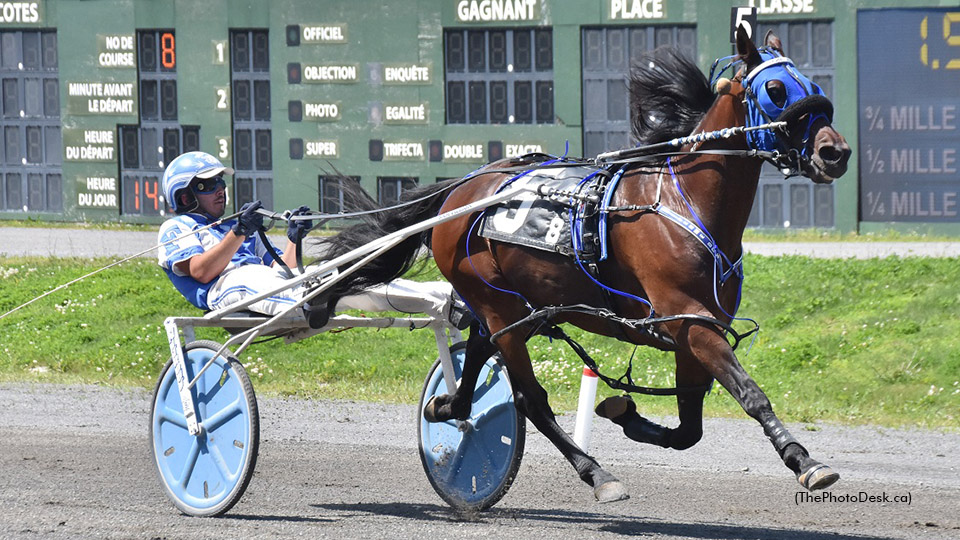 "I had driven D Gs De Vito a couple of times in Rideau and I knew that if I [put him] in front, no one [would] pass," said the 24-year-old Mont-Joli, Que. reinsman of his last shot. "I wanted Guy with Siddhartha behind me and that's where he was."

Gagnon did reach the winner's circle with Little T ($3.30) during the competition while Stephane Pouliot also picked up a victory driving Macho Polo ($3.80).

Fillion has won 224 races lifetime with his mounts earning in excess of $1.1 million. The rising star is coming off his first 100-win season in 2021.

Berube, a veteran reinsman from Portneuf, Que., recently passed the $10 million mark in career earnings and has driven 2,863 winners.

Here is a look at the final leaderboard:

Recaps of each QEORDC leg are available below.

Pascal Berube secured the early lead in the Quebec-Eastern Ontario Regional Driving Championship, with Windsong Napoleon ($5.20) winning the opening leg in a 4-1/2-length romp. Owned and trained by Yannick Martel, the eight-year-old pacer made front easily from the inside post with a pair of early breakers to his outside and cruised through fractions of :28.2, :57.3 and 1:25.4 en route to the 1:54.3 victory. Think Again (Nicholas Boyd) followed most of the way in third before edging out pocket-sitter Twin B Fearless (Guy Gagnon) at the finish to snatch the runner-up honours.

Berube padded his lead with another victory in leg two as he sent seven-year-old pacer Indigo Seelster ($31.90) first-up at the half and took the lead from the tiring pacesetter Stellar Feller (Samuel Fillion) on the final turn. The Eric Milot trainee drew clear down the stretch to win in 1:56.1. Pey Bug (Guy Gagnon) finished second from the pocket and favourite Titanium Alpha (Stephane Brosseau) followed the winner's cover to show.

Fillion sent the Royalty For Life filly underway from the back of the compact field, which was scratched down to just four starters for the $6,000 Preferred 2 & 3 Handicap Trot, while  P C Heisenberg retook the lead from Muscles Forever after a :28.1 first quarter and proceeded to the half in :58.3. Eau Naturelle (Guy Gagnon) was flushed from third as Fillion moved Stella Alpha underway from the back and they went three-wide past three-quarters in 1:28 to confront the leader. After facing off with P C Heisenberg down the stretch, Stella Alpha made one final surge to prevail at the wire and knocked one-fifth of a second off the track record for three-year-old trotting fillies that was set by Kinnder High Class in 2020.

Berube maintained his lead in the standings despite being scratched this leg with 33 points while Guy Gagnon moved into second with 19 points.

Guy Gagnon, the 2016 Quebec-Eastern Ontario Regional champion, made a winner's circle appearance after taking the fourth leg with Jean-Francois Reid's four-year-old pacing mare Little T ($3.30). Flushed first-up from third as the field headed in front of the grandstand the first time, 3-5 favourite Little T eventually wore down the front-striding Shanghaibluebeach (Marie-Claude Auger), who settled for third as Buckingham (Nicholas Boyd) rallied off the winner's cover to grab the runner-up honours in a four-across finish, with Kahlua Morning (Samuel Fillion) finishing fourth up the inside. The time of the mile was 1:57.1.

With the victory, Gagnon narrowed the gap on leader Berube, coming within one point of first-place (34-33).

With his rivals gaining points and starting to close in halfway through the competition, Pascal Berube extended his lead atop the standings in the fifth leg with his third win of the day in rein to 1-5 favourite Mach Play ($2.50). He cleared to command at the :27.2 quarter with the popular Nancy Auger-trained pacer and never looked back, leading through middle splits of :58 and 1:27.2 en route to a dominant 9-1/4-length score in 1:57 flat.  Vintage Love (Nicholas Boyd) won the race for place, collaring pocket-sitter HF Agent Andreoli (Stephane Brosseau) in deep stretch.

Berube leads Gagnon, 48-33, with Boyd third in the hunt with 30 points after the fifth leg.

Samuel Fillion doubled up in the Regional competition going wire-to-wire in the sixth leg, the $5,500 Fillies & Mares Preferred 3 Pace, with 3-2 favourite Fancy Girl ($5). With the inside post advantage, the Dominique Picard-trained mare went straight to the front and kept her rivals at bay when they stacked wide in pursuit down the backstretch. Fancy Girl went on to win by 1-3/4 lengths in 1:56.1. Southwind Bayou (Ryan Guy) followed in the pocket to finish second ahead of the first-over challenger, Platine Alpha (Nicholas Boyd).

With the victory, Fillion took over second-place in the Regional scoring behind leader Pascal Berube (49-38 points). Nicholas Boyd (36) and Guy Gagnon (35) are just a few points behind.

Driver Stephane Pouliot was a winner in the seventh leg, emerging with the lead in the first turn among the early leavers aboard 4-5 favourite Macho Polo ($3.80) and the pacer never wavered to score in 1:56.2 for trainer Mac Lemay. Disneyman (Samuel Fillion) closed off cover to finish a half-length back in second with pocket-pursuer Keystone Prestige (Guy Gagnon) finishing along the pylons to edge out first-over challenger Prairie Mystic (Nicholas Boyd) for third prize.

Samuel Fillion closed out the competition with a driving triple as 6-5 favourite D Gs De Vito ($4.40) swept from third to first after a contested :27 opening quarter in the $6,000 Preferred 2 & 3 Handicap Pace then shook off a challenge from Siddhartha (Guy Gagnon) through splits of :55.3 and 1:23.4 to score going away in 1:52.1. The 5-1/2-length winner is trained by Guylaine Fortin. Siddhartha settled for second and early leader Windsun Cheyenne (Ryan Guy) finished back in third.

With the victory, Fillion overtook Pascal Berube in the point standings to win the Regional, finishing first with 61 points. Pascal Berube and Guy Gagnon tied with 50 points.

In the event of a scratch, the driving rep drawn to a horse shall drive the ‘also eligible’ horse.

In the event of a horse being scratched or where no horse is available, five (5) points shall be awarded to the driver concerned. If a horse is disqualified or a horse and driver fail to complete the race, they will receive one (1) point.