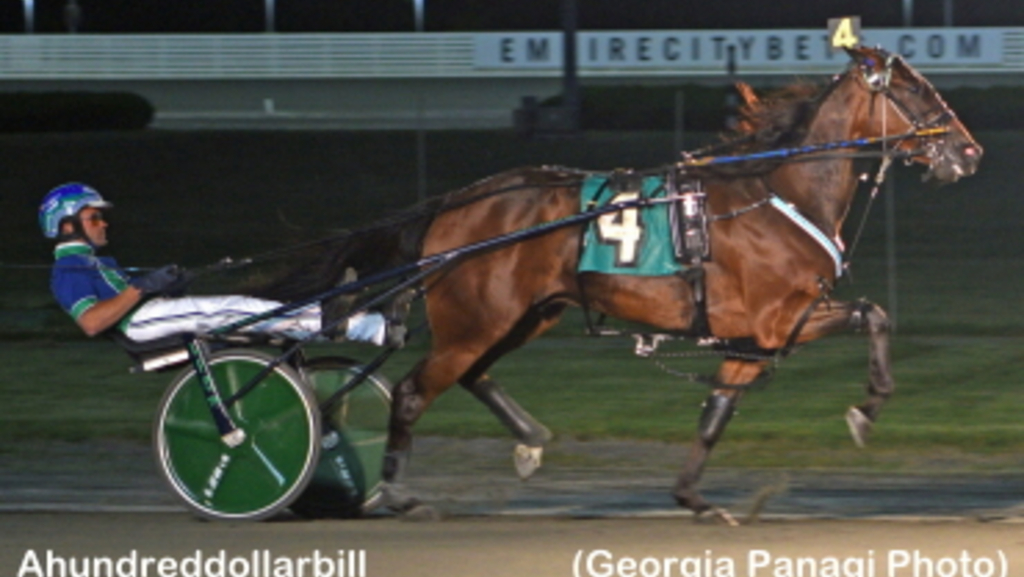 Ahundreddollarbill captured the first of two $40,000 eliminations of the MGM Yonkers Trot for three-year-old colts and geldings on Friday night at Yonkers Raceway in a sparkling 1:54.2 mile and likely stamped himself as the favourite for the $500,000 July 2 final, the first jewel in trotting’s Triple Crown.

Driven by Andrew McCarthy, Ahundreddollarbill floated away from the gate at the outset and allowed the Ake Svanstedt-trained Mon Amour and Incommunicado to exchange the early lead, with the latter moving to the fore off the opening bend. Once the dust settled up top, McCarthy used the long backstretch to send Ahundreddollarbill full tilt to control midway on the second turn. After an opening quarter in 28.2, the 1-5 choice hit the half in :57, with his five rivals willing to follow along the pylons.

Ahundreddollarbill rated the pace kindly as Mon Amour pulled from third on the backstretch, allowing On A Streak to catch his cover. With three-quarters clocked in 1:25.4, McCarthy let the Tony Alagna-trained son of Chapter Seven sprint off from the field, and he trotted a :28.3 final quarter well in-hand. Mon Amour and Yannick Gingras made up decent ground to finish a sharp second, with Ethan T Hanover (Jason Bartlett) winning the photo for third over On A Streak (Bob McClure). The top four finishers return for the final.

Ahundreddollarbill is owned by Crawford Farms Racing and James Crawford IV. He won for the fourth time in 2021 without defeat and returned $2.50 to win.

The second $40,000 elimination turned into a match race between Ake Svanstedt entrymates Johan Palema and Ambassador Hanover, with Johan Palema and driver Yannick Gingras getting up for the win in the final strides of a 1:54 mile.

Ambassador Hanover and Svanstedt left sharply from post two, and Johan Palema quickly settled in behind him into the opening bend. Steel, with driver Andy Miller, attempted to sweep by those pair at the outset but made a miscue mid-way through the opening bend and lost all chance.

Owned by Bender Sweden Inc, Johan Palema was a winner for the second time in three starts in 2021 after going winless in six tries as a freshman.

In the $25,000 sole elimination for the $150,000 New York New York Mile, Mazzarati and driver Tim Tetrick took control before the quarter pole and wired the field of eight three-year-old trotting fillies, with the top six joining Iteration and Sweeping Rainbow, who were offered and accepted byes.

Imhatra AM S and driver Brian Sears jetted to the front entering the opening bend and parked Mazzarati to mid-backstretch before yielding control. Mazzarati, a daughter of Cantab Hall sent postward as the second choice, hit the quarter in :28 and half in :57 before an outer tier flow began.

Contested Hanover, part of the 4-5 favoured entry in the field, moved for Scott Zeron off the third turn with a measured outside advance, followed by Rebel Girl with Dexter Dunn. Mazzarati never saw those rivals, though, as Tetrick allowed her to pass three-quarters in 1:26.1 and comfortably head into the homestretch.

Only Imhatra AM S would have a chance at the winner once Contested Hanover weakened, and Sears let his regally-bred filly trot, but she would inevitably run out of real estate, falling a head short in the 1:55.2 mile. Contested Hanover finished third. Also advancing to the July 2 final will be Rebel Girl, Presto, and Lindys Dollywood.

Lucas Wallin trains Mazzarati, who won for the first time in 2021 in four tries.

American Courage just missed the track record by a fifth of a second and Abuckabett Hanover overcame troubles on the turns to win the two $40,000 MGM Grand Messenger Stakes eliminations for three-year-old colt and gelding pacers. 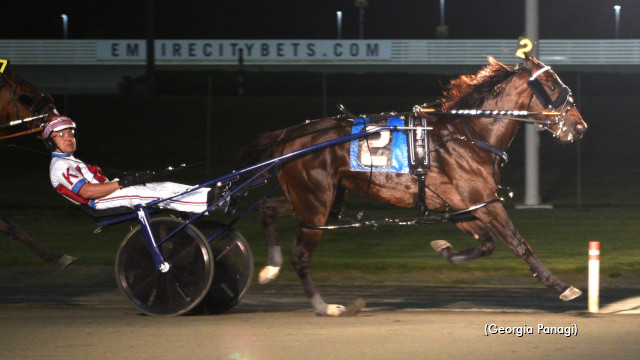 Driver Matt Kakaley had American Courage on the engine at the :27.4 opening quarter in the first elimination, and after taking command, he went on to the half in :56. It was at that point that Heart Of Chewbacca (Dan Noble) made a first-over move out of last, and that bid would carry him into second before the 1:23.4 three-quarters. However, his bid stalled on the final turn as American Courage kicked on and came home in :27 to win by a length and a quarter in 1:50.4. Charlie May (Brett Miller) tucked into third from post seven, rode the rail, and rallied to finish a good second, with Chase H Hanover (Brian Sears) third and Simon Says Hanover (Scott Zeron) getting the last spot in the final.

Abuckabett Hanover (Andrew McCarthy) was the headliner of a 1-9 entry in the second elimination, but his chances didn't look very good on the first turn as he veered to the right and lugged out several paths. Fortunately, there was nobody alongside him and McCarthy was able to bring him down to the rail in fourth as Ill Drink To That (Dexter Dunn) led the group to the :28.1 opening quarter.

There were no surprises in the companion $25,000 Park MGM Pace eliminations for fillies either as Heart Of Mine and Test Of Faith came in undefeated in 2021 and left with that status intact.

Heart Of Mine, piloted by Scott Zeron, looped Darby Hanover (Andy Miller) to take the lead past the :28.2 opening quarter in the first elimination, then backed down the middle-half fractions to :58.2 and 1:27.1 with no outside pressure. Zeron let Heart Of Mine sprint in the final quarter, and she responded with a :27.1 kicker to prevail by a length over Darby Hanover in 1:54.2. Shania Blue Chip (Andrew McCarthy) and Lyons Softasssilk (Tim Tetrick) stuck to the cones and got the other spots in next Friday's final.

Trained by Linda Toscano, Heart Of Mine is a Roll With Joe filly owned by The Bays Stable LLC, Radio Racing Stable, Fred Wallace, and Camelot Stable Inc. Heart Of Mine, who was bred by Brittany Farms and is six-for-six in the win column this year, has a record of 7-5-1 from 17 career starts, and she has banked $217,131. Heart Of Mine paid $2.90 to win.

As for Test Of Faith, she bided her time in the fourth position while first Marsala Hanover (Zeron) and then Classicist (Todd McCarthy) showed the way through a :27.3 opening quarter and a :56 half in the other elimination. David Miller brought Test Of Faith to the outside on the way to the 1:24 three-quarters, moved up into second to the outside of Classicist on the far turn, and then went by in the lane while in-hand, prevailing by a measured three-parts of a length in 1:52.1. Classicist was a good second at 21-1, with Marsala Hanover third and So Irresistible (Andrew McCarthy) fourth.

A daughter of Art Major, Test Of Faith is trained by Brett Pelling for owners Mel Segal, Kentuckiana Racing Stable, and Eddie Gran. Test Of Faith has 11 wins and a second from 12 lifetime tries, and she has now earned $562,700. She was the 1-9 choice and returned $2.10 to win.

The draws for the finals will take place on Monday (June 28).