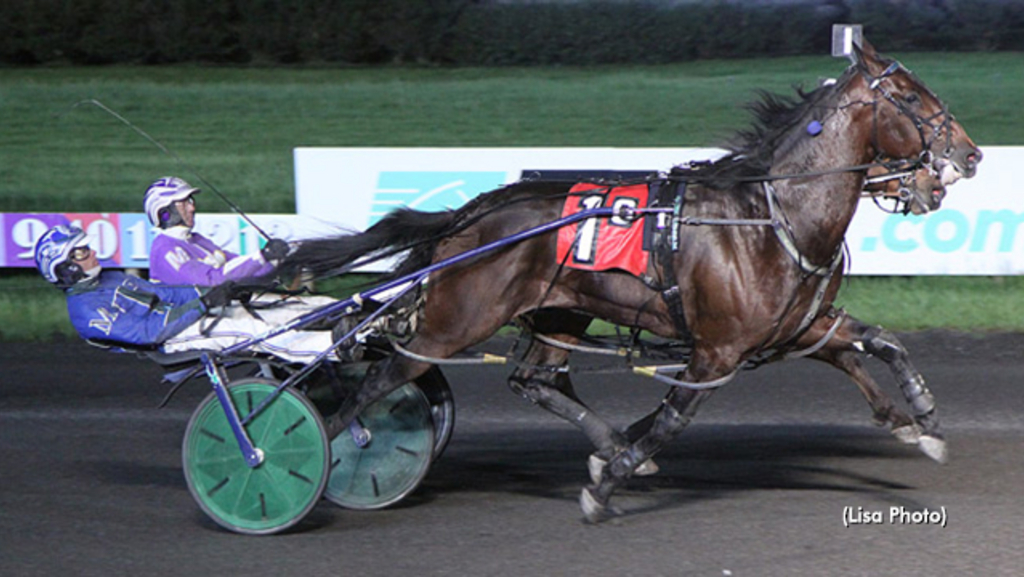 Maybe the indicator came at qualifiers Friday morning, when Tony Alagna trainees won the first six races, because Alagna’s barn carried that momentum into Saturday night (May 7), taking both $50,000 splits of the first leg of the Graduate Series for four-year-old Open pacers at The Meadowlands.

In the first division, Carbine gunned down 1-5 favourite Charlie May, who took down a stronger field of older foes one week ago in 1:48.3, after sitting a pocket trip and getting up by a head in a driving finish.

Leaving from post nine in the 10-horse field (there was one scratch), Charlie May left belatedly and had no spot at the pylons as Bettors Donttell ripped through the opening quarter in :26.3 as Carbine settled into the two-hole.

Carbine then quickly took the top at the three-eighths as Charlie May continued his methodic first-over march toward the point, finally getting the lead while parked at the half in :54.2. But the tough trip would end up taking its toll.

Charlie May led past three-quarters in 1:22 and looked poised to make it two-for-two in 2022, but driver Todd McCarthy slipped Carbine, a son of Somebeachsomewhere-Shot Togo Bluechip, out of the pocket mid-stretch and under heaving urging nailed the 1-5 favourite, hitting the finish in a lifetime-best equaling 1:49.3. Southwind Gendry was third.

“I was really happy with the way the horse raced last week (when second in his first outing of the season),” said McCarthy. “It was always going to be difficult for Charlie May from the outside post. He was going to have to do a lot of work. When I asked my horse, he gave me everything he had.

“Last week, he got to running a little bit on the turn, so I had to help him out a little bit there, but Tony did a great job making a few minor changes so he’d get around the turns a little better tonight. Hopefully, he’s got a good season ahead of him.”

But Alagna’s fun was only half done.

Abuckabett Hanover, the 2021 Tattersalls champion, shined in his seasonal debut, following a live second-over tow to get to the winner’s circle in 1:50.

Driver Tim Tetrick got the son of Betting Line-All Tucked Up into a live cover flow as Abuckabett Hanover was towed into the race by Rockyroad Hanover, who left the gate hard from post 10. It was a rocky road for 'Rockyroad', who never found a spot along the rail, yet still had more than enough pace to drag the eventual winner into the race.

Abuckabett Hanover slid off his cover shortly after straightening away for the stretch drive and wore down a determined Lou’s Pearlman, the 9-5 favourite who could not hold on for the win despite rating the third fraction back to a sleepy :29.4, settling for second. Rockyroad Hanover was a superb third.

“I was confident,” said Tetrick. “He’s superfast. Tonight, we got a great trip. I think that’s where he likes it best (racing from off the pace).”

While recording his 12th win from 33 starts, Abuckabett Hanover raised his lifetime earnings to $784,783. He returned $6.20 to win as the 2-1 second choice in the betting.

In the lone Graduate dash for trotters, which sported a purse of $75,000, Sonofamistery, off a pair of victories in New Jersey Breeders Maturity action, was ultra-game in recording a 1:52.1 score. The son of Muscle Hill-Mystery Woman did not see the rail until clearing the lead after the half.

Rattle My Cage came calling and pressed the leader throughout the final three-eighths-of-a-mile, but Sonofamistery, who hails from the dynamic trotting duo of driver Brian Sears and trainer Marcus Melander, was dead-game through the stretch drive and held to the wire to record a neck victory. Delayed Hanover closed like a shot late to get third.

Sonofamistery returned $7.40 as the second choice in the betting.

NINE IS FINE: Saturday marked another night of big action at The Big M, as a total of $3,359,528 was put in play, marking the ninth time this year that betting busted the magic $3-million barrier.

Also, for the second time in 2022, betting blew past the $3-million plateau on both nights of the race week.

On April 1-2, a total of $6.3 million was pushed through the windows, while this weekend saw a total of $6.4 million in all-source wagering.

A LITTLE MORE: Workin Ona Mystery had little problems negotiating the track labeled "good", as the six-year-old son of Captaintreacherous-Dragons Tale, a Ron Burke trainee, scorched the mile oval on the front end with Tetrick piloting to the tune of :26.2, :54.2 and 1:21.4 before sprinting home in :26.2 to record a lifetime-best equaling time of 1:48.1, which equaled the fastest mile of 2022, originally established by Red Right Hand two weeks ago. Workin Ona Mystery returned $4.40 as the 6-5 public choice in the $31,500 Open for pacers.

Defending Horse of the Year Test Of Faith made her seasonal debut in a $40,000 Open for pacing fillies and mares, but after swinging four-wide at three-quarters from 10th, settled for a fourth-place finish in the race taken by Amazing Dream N in 1:50.3.