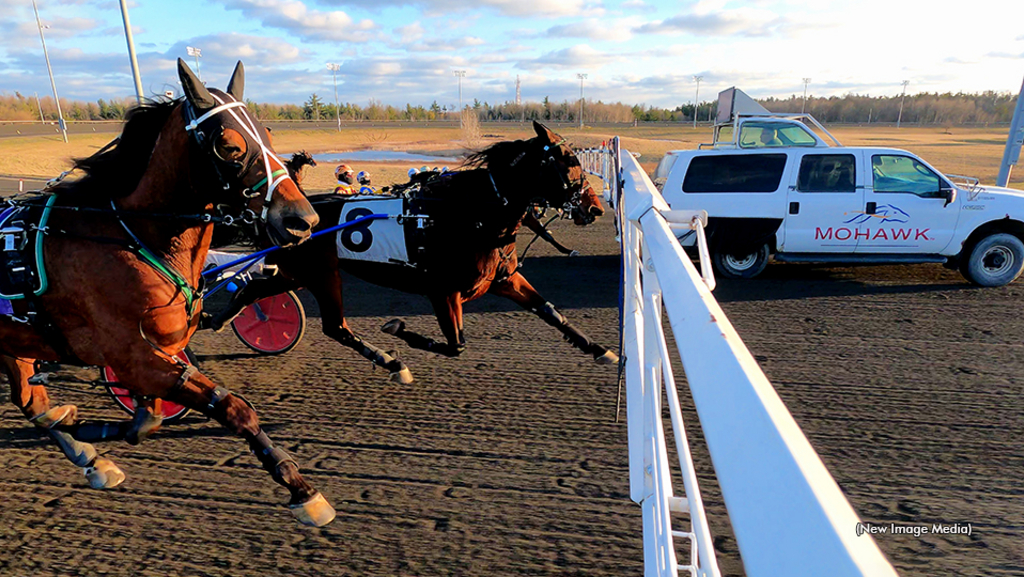 There was no shortage of notable performers during the Friday (May 6) session of qualifiers at Woodbine Mohawk Park.

Stonebridge Helios started the session with some fireworks of his own, uncorking the fastest mile in Canada by a sophomore pacer thus far in 2022. The stakes winning colt was making his second appearance of the season for his connections, with driver Bob McClure changing up tactics from his first test. This week, Stonebridge Helios did all the work on the front end and looked happy to do it. After opening fractions of :27, :56.2 and 1:24.4, Stonebridge Helios zipped home in :26.2 to trip the timer in a lifetime best 1:51.1 nearly seven lengths better than rivals.

Trainer John Pentland shares ownership on Stonebridge Helios with John Fleischman of Ottawa, Ont. and breeder Angie Stiller of Arva, Ont. The Sunshine Beach-Ken Doll J colt never missed the board as a freshman, banking $295,710 in just seven starts with a 4-2-1 summary. Stonebridge Helios was ranked #3 in the TROT Magazine 2022 Pepsi North America Cup Spring Book, with the complexion of that race changing after favourite Monte Miki was announced as retired due to injury this week.

Also posting positive progress in his second appearance of the season was 2021 Ontario Sires Stakes Super Final winner Twin B Archie. The son of Archangel - Affair Hall made a midstretch miscue one week ago, but returned this time around with his familiar trotting hopples back on. Driver James MacDonald asked Twin B Archie to make every call a winning one, and he did just that. Through moderate early splits of :29, :59.3 and 1:29, the afterburners were engaged in a speedy :26.3 final quarter for a 1:55.3 mile time.

Twin B Archie had eight top-three finishes in 10 season starts for trainer Scott McEneny, who co-owns with Domenic Chiaravalle of Hamilton, Ont., Floyd Marshall of Jarvis, Ont. and Martwest Racing Stable of Mississauga, Ont He accrued $285,000 in earnings while posting wins in three Ontario Sires Stakes events including the Super Final, and a division of the Champlain Stakes — the race in which he took his mark of 1:54.3.

Fellow OSS Super Final winner Prohibition Legal was making her first appearance of the season, and the 2021 O'Brien Award winner picked up right where she left off — ahead of her competition. MacDonald also engineered this effort, clearing to the lead from fifth after a tepid 1:00 opening half to pace her own back half in :55.4 — final quarter in :26.4 — to hit the wire in 1:55.4. Prohibitional Legal was a diminishing but unasked length and a half better than a determined Love That Smile (Louis-Philippe Roy), who closed ferociously in her second outing of the season.

A homebred Big Jim-Catch A Wish filly owned by Millar Farms and trained by Nick Gallucci, Prohibition Legal finished her rookie season with eight wins in nine starts — her only loss a runner-up finish in the Shes A Great Lady Stakes — while banking $564,204 en route to divisional honours.

Adare Castle also joined her aforementioned fellow OSS Super Final champions in qualifying action, winning her test for the second consecutive week. James MacDonald had the daughter of Muscle Mass - Pacific Edge out and moving before the :29 opening quarter, landed on the lead shortly thereafter and was never threatened. Posting middle panels of :59.2 and 1:28.4, Adare Castle looked well within herself through a :27 final stanza to complete the 1:55.4 mile.

Mark Etsell trains and co-owns Adare Castle along with Robert Newton, Graham Hopkins and Peter Porter. Expect to see Adare Castle make her 2022 pari-mutuel debut in the eliminations for the SBOA Stakes.

Six-year-old open class star Enavant made his first appearance of the season against older rivals. Not content with the tempo heading for the third quarter, driver Bob McClure shifted Enavant fifth into the outer flow and then three-wide in the blink of an eye around the final turn to clear his foes by the third station. Powering home under wraps in :26.2, Enavant captured his qualifier in 1:55.4.

Luc Blais trains Enavant (Somebeachsomewhere - Lady Be Great) for Determination of Montreal and Guy Corbeil of Mirabel, Que. The stakes winner comes into 2022 with a summmary of 16-4-2 from 26 starts and more than $243,000 in earnings.

For the second straight week, O'Brien Award winners Pemberton and Forbidden Trade have factored in the finish of a qualifier at Woodbine Mohawk Park. And for the second straight week, Pemberton emerged victorious. Paul Walker positioned Pemberton behind Forbidden Trade through fractions of :27.3, :58 and 1:27.2 and then popped out of the pocket in the stretch full of trot. Storming home in :26.2, Pemberton was a length and half the the best, stopping the clock in 1:54.

Bred and owned by Brenda Walker of Owen Sound and Christine Walker of Tara, Ont., Pemberton (Wheeling N Dealin - Dayshifter) sports a 8-0-1 summary from 10 lifetime starts — all at age three — with more than $363,000 in the bank.

The video stream from the Friday session is available below.