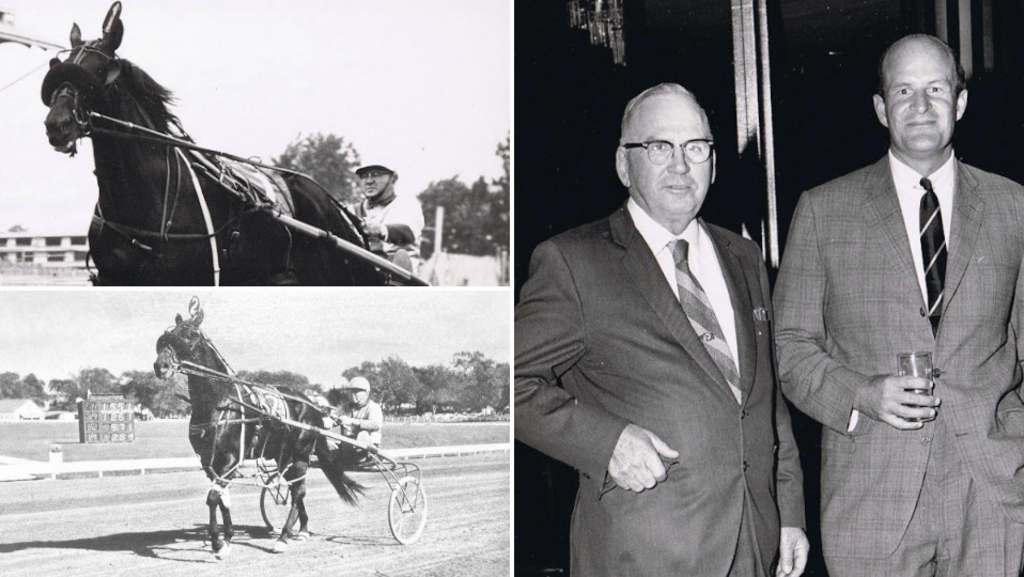 In this week's edition of Rewind Robert Smith recalls the lengthy and spectacular career of the great Meadow Skipper.  This horse authored his own chapter in the modern day history of harness racing.  Today's piece includes several old photos of this famous horse and his equally famous trainer-driver. 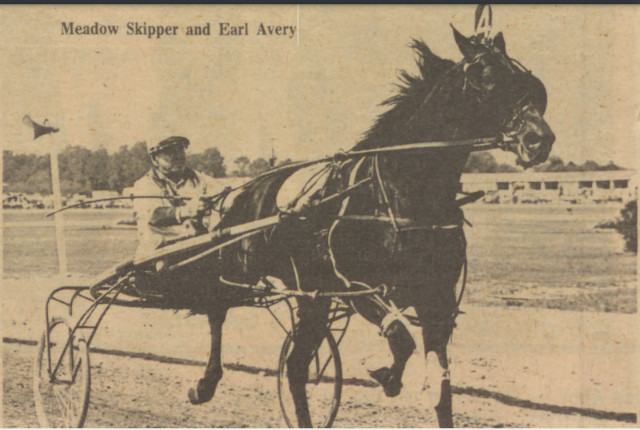 Sixty years ago back in 1962,  the career of the pacing great Meadow Skipper was just beginning as he embarked on his two-year-old season.  A foal of 1960, this remarkable son of Dale Frost out of Countess Vivian would go on to accumulate records, honours and statistics achieved by a precious few in the sport's history.  His speed and grace on the track and later his overall influence on the breed as a sire would defy those who dared to make predictions.

In 1962 Meadow Skipper had a very good freshman year which saw him win a total of 15 races in 27 season's starts. Then owned by Hugh Grant of Bedford, Pa., the young royally-bred son of Dale Frost out of Countess Vivian raced in many different spots with his successful campaign ending at Hollywood Park in Inglewood, California. While on the west coast he started in three races, winning the last two starts, the final one on October 30th, taking his season's record of 1:59 4/5 for catch driver Joe Lighthill.

At this time sub-2:00 speed by two-year-olds was quite uncommon.  Likewise not too many young horses won large sums of money. Meadow Skipper did crack the 2:00 barrier and despite a 15-win season and racing literally from coast to coast, he ended the year with a bank account of just a shade over $24,000.

Like many great performers and prospects of this era, Delvin Miller was involved as he was a long-time trainer and advisor for Mr. Grant.  Additionally he was closely connected to both the sire and dam of Meadow Skipper. Although he had not driven the colt too often, he was well aware of his progress and more importantly of his potential. He reportedly advised Mr. Grant that if he were to sell this young horse that the asking price should be at least $150,000! 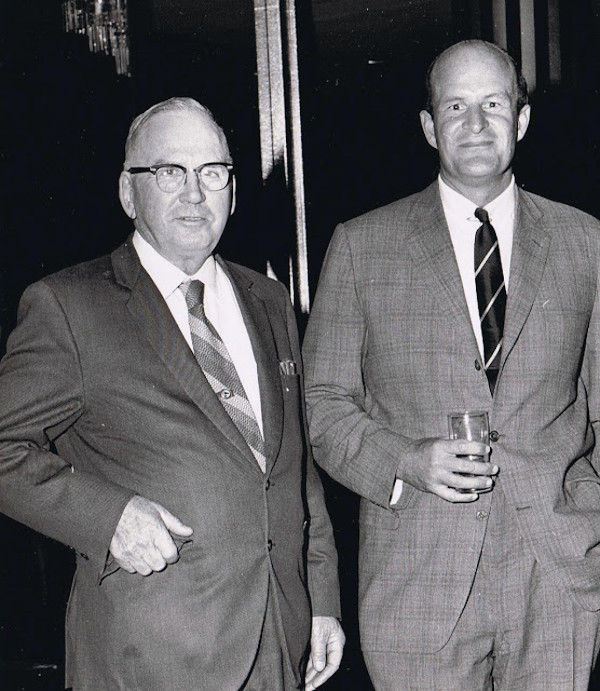 Early in his three-year-old season a man who would be a big part of the Meadow Skipper story stepped into the picture.  The great New Brunswick-based horseman and potato farmer Earle Avery became a major player.  Avery contacted his employer, Mr. Norman Woolworth of New Canaan, Ct., and suggested that he attempt to purchase this
young horse. While one might associate the name "Woolworth" with "nickels and dimes", this man was no stranger to parting with some "long dollars" when he felt the time and the horse warranted.

Mr. Woolworth was amazed for two reasons; one was that he had never even heard of this "phenom" that Avery spoke of and, secondly, Earle was more in the habit of talking his boss out of buying certain horses, not touting them. Woolworth was so taken with the suggestion that he set out to buy the young Meadow Skipper. Knowing of Avery's "crush" on the horse was all he needed to know. Woolworth was quoted as saying "he told me not to buy about 100 others but he asked me to buy him. It was the best buy I'll ever make."

After a series of phone calls and consultations, he purchased the colt and placed him in the hands of Avery as part of the famous Clearview Stables.  While the selling price was always presumed to be in the neighbourhood of the $150,000 mark suggested by Del Miller,  it was never disclosed. This was an unwritten part of the deal and even after the passing of Hugh Grant, the tacit agreement was never disclosed. 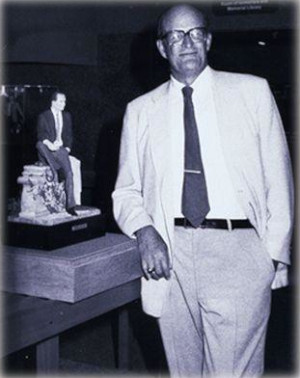 Norman Woolworth, shown above, was the longtime owner of Clearview Stables of Winthrop, Maine.  He was an outstanding member of the harness racing community for many years.  At times he competed as an amateur driver.  (Photo courtesy of Harness Racing Museum & Hall of Fame)

At this time Earle Avery was at an age when most people at least contemplated retirement.  Born February 4, 1894 he was a gentleman of 69 years of age.  He went on to manage the career of this great horse including all of the training and driving  assignments. He somehow knew that he still had a lot to offer. Avery was quoted as saying "After I had him for a month, I knew he had the potential to be one of the greatest that ever lived." 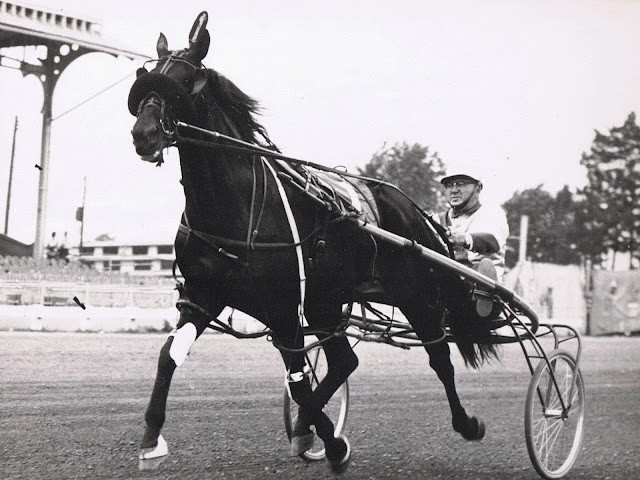 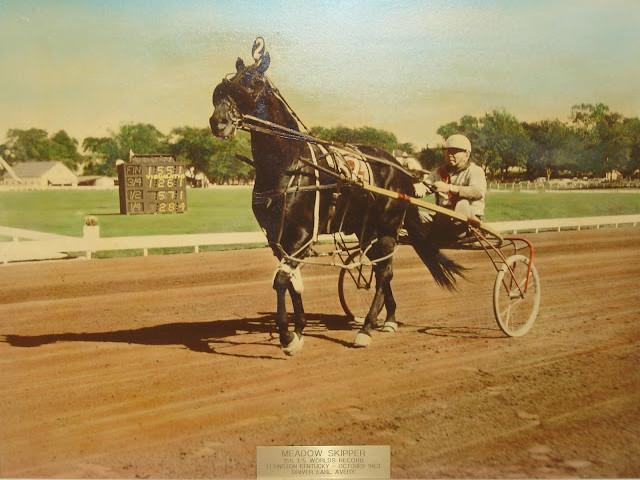 At 69 years of age, Avery captured the Cane Pace with “Skipper" at Yonkers and later that fall the pair recorded a 1:55.1 mile at the Red Mile in Lexington, Kentucky, defeating Overtrick. It was the second fastest mile in pacing history at that time.

Early in his career at age 25, he did something that few others in the sport have probably ever done.  As his wife was nearing the birth of their eldest son Robert,  Avery harnessed his best horse Black Peter, drove into the town of Woodstock and returned with the Doctor.  A short time later following the birth, he returned the Doctor to his office and proceeded on to a nearby race meeting at Island Park where he won three of five heats with this same horse, $160 in purse money, as well as a blanket! He had recently purchased this horse in Houlton, Maine for $250 and borrowed a cart and harness to drive him home.

Suffice it to say that whatever amount Meadow Skipper cost, it will go down in history as one of the GREAT DEALS of all time. On the track he amassed a lifetime bankroll of over $428,000 and took a record of 1:55.1. His exploits as a sire defy description, and his influence on the sport continues after all these years.

Note: I would like to thank Brent Briggs, noted Maritime racing scribe and historian, for allowing me to use a number of photos that appear in today's story.  Many are from the Avery family collection.

Quote For The Week: "Behind every great man is a woman rolling her eyes." - Jim Carrey 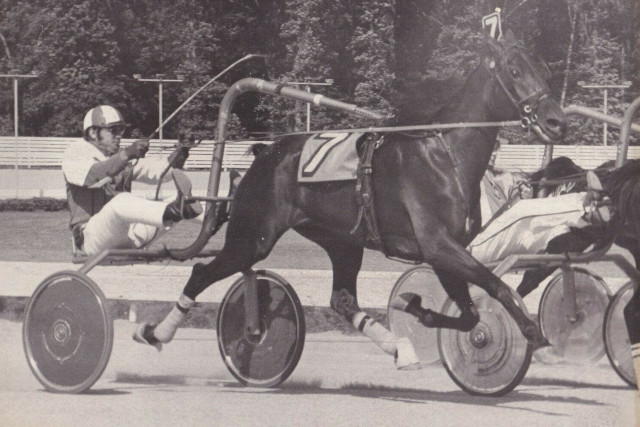 Can you identify this well known driver? It has been nearly 50 years since the rather short existence of the single shaft sulky. Let us know who you think it is.

Who Else Is It? 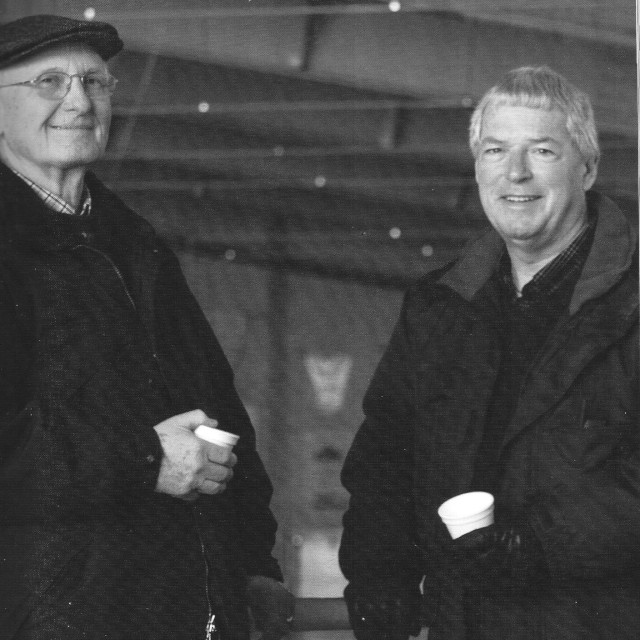 This picture is not very old but when it was taken the two gentlemen shown had been working together as a team for a reported 36 years at a far Eastern Canadian track.  Can anyone name them?

Be sure to tune in during the coming week for the correct answers to today's pictures.

The correct answers for this week's pictures were as follows :
The top picture was correctly identified as driver Greg Wright in the single shaft sulky .Thanks Gord .
In the lower photo was car driver Charlie Ramsay ( a native of Pembroke Ont.) on the left and his long time starter partner Dave Nicholson a Saint John native .These two gents had a long history at Exhibition Park Raceway and in 2009 were recognized as the longest - standing pair of starters in Maritime history .

No pant clips gave it away…

No pant clips gave it away. Greg Wright.