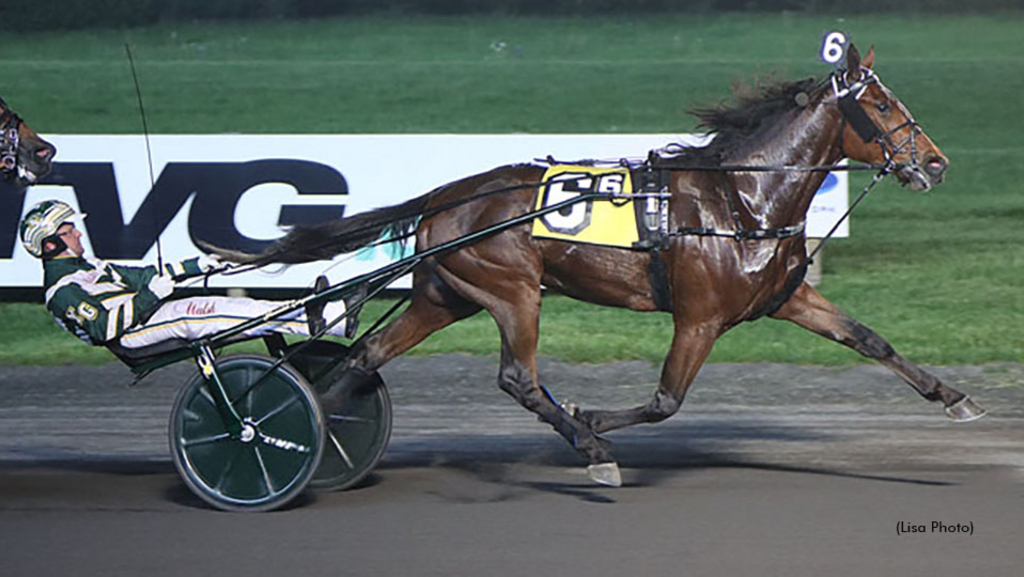 Friday night at The Meadowlands, Takter sent out a pair of winners during the second leg of the New Jersey Sire Stakes for three-year-old trotting colts and geldings, and both hit the wire in 1:51.4, the fastest time of the year in the division.

First up was Pretender, who went off stride as the 1-5 favourite in the Dexter Cup last Saturday. The Muscle Hill-Maven product surged to the lead at the half in :56.3 after going around early leader El Toro Loco. From there, driver Yannick Gingras was left with little to do as the winner lowered his previous lifetime best by two and one-fifth seconds. Testing Testing was second, 3-3/4 lengths back, with 8-5 favourite B A Superhero, who was looking for his third win in as many 2022 starts, grabbing the show dough.

Pretender returned $8 as the 3-1 third choice in the wagering while upping his lifetime stats to four wins from 15 starts.

“He was just a little bit wide in the Dexter,” said Takter. “He needed one more step to get around a horse to his inside or he wouldn’t have gone off stride. Tonight, he was super. He gets a little bit anxious, so I left an ear hood on him to make sure he stayed quiet. If he continues to develop, we are trending toward the direction of The Hambletonian.”

Pretender is owned by breeders John Fielding, Herb Liverman and Joyce McClelland along with Caviart Farms.

In the very next race, Takter trainee Looks Like Moni, off a second-place finish to B A Superhero, flashed his big turn of early speed for a second straight week, and this time around finished the job wire-to-wire, winning by one length over Senna. Majestic J was third.

The gelded son of Muscle Hill-Thats All Moni blasted to the top from post six and hit the quarter in :27.2, and after backing the second fraction down to :29, trotted his back half in :55.2 to match his stablemate’s North American season’s mark with Gingras calling the shots.

As the 4-5 public choice, the Hambo hopeful paid $3.60 to win, scoring for the second time from 11 lifetime starts while lowering his previous mark by three and two-fifth seconds.

“He was a little bit of his own worst enemy as a two-year-old,” said Takter. “So we gelded him and it’s made a world of difference. He was constantly kicking the walls in his stall. Gelding him has made him tougher. Now, he fights. He was better this week than last. He’s still not perfect. I think they are both good horses. It wasn’t out of the realm that they would do that [establish the North American season’s best], but both are not as perfect as they could be at this point.”

The homebred is owned by Brittany Farms, Marvin Katz and Al Libfeld.

Temporal Hanover took the other division for males, scoring in a lifetime-best 1:52.3 for driver Brian Sears. For a second straight NJSS start, the son of Walner-Think Twice was explosive through the stretch, rallying off a second-over trip from fifth at three-quarters for trainer Marcus Melander to up his career stats to seven wins from just 14 starts. Brave By Design was two lengths back in second with Villain third.

The Ake Svanstedt-trained and driven Jiggy Jog S went parked for the final three-eighths before wearing down leader Jaya Bae in the first of two splits for sophomore filly trotters.

The daughter of Walner-Hot Mess Hanover, who missed a nose to Venerable in her seasonal debut, recorded a head victory in a lifetime-best equalling 1:52.2 and paid $5 as the 3-2 second choice in the betting. Misswalner Fashion, the 6-5 favourite who took the 2021 Kindergarten final, was third making her first start of 2022.

Fashion Schooner scored in the other division for fillies, hitting the wire 3-3/4 lengths clear of Peyton Hanover in a lifetime-best 1:52, the fastest mile of the season in her division. Primadonna Deo and Disclosure finished in a dead heat for third, but Disclosure was disqualified and placed fifth for going off stride at the finish.

A daughter of Walner-Broadway Schooner, Fashion Schooner took control while parked to the half in :56.2 before rolling home to a dominant score, her second in three starts this year after failing to record a victory in three outings a year ago.

Driven by Tim Tetrick, the Jim Campbell trainee returned $2.60 to win as the 1-5 public choice.

NJSS NON-BETTORS: Before the regular 13-race program, there were a pair of $20,000 second leg New Jersey Sire Stakes events for three-year-olds on the pace conducted as non-betting affairs.

In the split for colts and geldings, Count Mara went wire-to-wire for Tetrick and trainer John Pyott in 1:59.2. The gelded son of Lis Mara-Madam Countess hit the wire 1-3/4 lengths in front of second-place finisher Polaris Breech.

Bee Aware won her second straight NJSS dash in the division for fillies. The daughter of Great Vintage-M A Jackie came from off the pace to register a lifetime-best 1:54.3 score for Steve Smith and Laurie Molnar. Dry Ridge Cutie was three-quarters of a length back in second.

(With files from The Meadowlands)