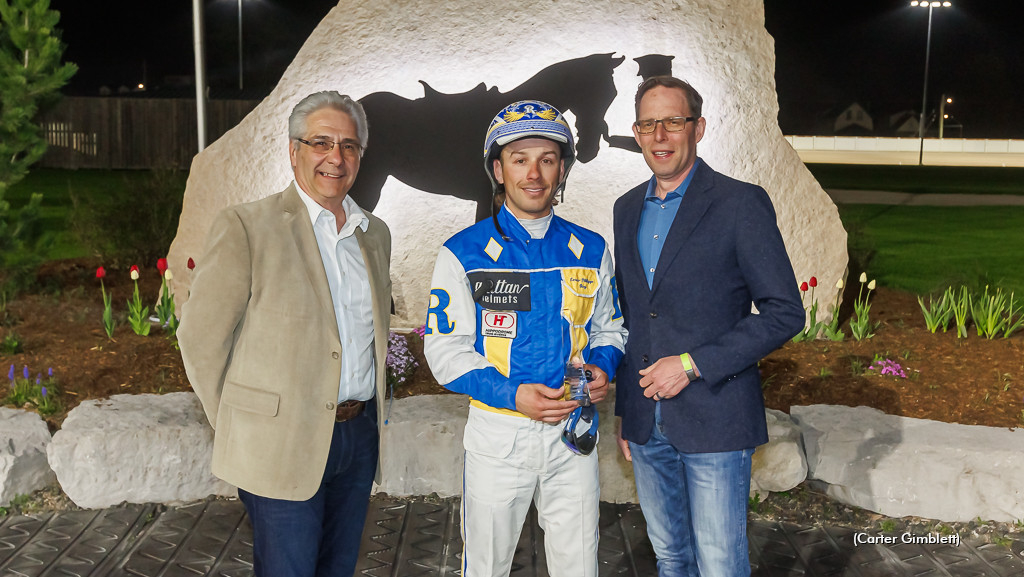 Roy led all drivers in wins with three in the nine-race contest. He persevered through a first-over grind with also-eligible draw-in No Time At All ($15.60) to land his first win on the night before scoring back-to-back wins at the conclusion of the card with Dabunka ($27.40) and Willywin ($5.40). Roy, who began driving in 2008 and has 1,940 wins to his record, advances to the 2022 National Driving Championship in November at Century Mile alongside runner-up Doug McNair, who finished second with 60 points.

A 32-year-old resident of Guelph, Roy made his way to Ontario after starting out his driving career in Quebec. Once he made the move to compete on the Woodbine Entertainment circuit, he quickly rose to the top of the standings. Roy won the O'Brien Award as Canada's Driver of the Year in 2018 and 2019, and he will make his first appearance in the National Driving Championship after qualifying for the event in 2018 but then stepping away due to other commitments.

"I'll be pretty excited, especially when I qualified [in 2018] but Doug ended up taking my spot and winning the Canadian title and then going to Sweden with James. I saw them going and I had a little pinch [of envy]," said Roy after his ORDC win. "I'll be happy to be competing in the National Driving Championship. We'll have some good competition. [Doug] is a great driver and it's always good to compete against him."

The final leaderboard for the Ontario Regional Driving Championship is as follows:

Recaps of each preliminary for the Ontario Regional Driving Championship appear below:

ORDC LEG 1
Brett MacDonald jumped out to an early lead in the 2022 Ontario Regional Driving Championship, guiding Century Harlot ($18.90) to the mile of her life in the first leg of the competition. Century Harlot was forwardly placed off the gate and took no prisoners after gaining command, posting panels of :28.1, :57.4 and 1:25.4 before sprinting home in :28.4 to hit the wire in 1:54.3 to take four seconds off her previous lifetime best. Century Harlot was better than Innocent Kiss (Travis Henry), Insincerity (Trevor Henry) and Land Of Paradise (James MacDonald) in a three-way battle for place.

ORDC LEG 3
With the fifth race of the evening came the fifth new lifetime mark as James MacDonald guided Runaway Heiress ($6.60)  to a new career mark for his first ORDC leg win. MacDonald sat the pocket behind Siboney (Bob McClure) through fractions of :27.3, :57.2 and 1:26.4 before getting out at the head of the lane and sprinting away from her rivals to win in 1:57. Flysantanna (Colin Kelly), Tanzanian (Brett MacDonald) and Siboney completed the top four finishers.

ORDC LEG 4
No Time At All (Louis-Philippe Roy) drew into the race off the also-eligible list and made the most of the opportunity. Landing post 5 with the scratch of Its Eds Idea, No Time At All forged forward and dug into pacesetter Take The Deal (Austin Sorrie) through a clip of :27.4, :56 and 1:25.1. The field tightened behind the dueling pair into the final turn, but No Time At All perservered through the uncovered grind to down Take The Deal at the finish of a 1:55.3 mile. R Thinking Monster (James MacDonald) rallied to finish third and AJknight (Brett MacDonald) could not find room off a pocket trip in the stretch and settled for fourth.

ORDC LEG 5
Speed remained the name of the game in London as Shes A Comedian (Doug McNair) grabbed the lead after a :28.2 first quarter and rated on the point in progress to a 1:57.1 win. Reminisce Road (Brett MacDonald) applied first-over pressure into a :58 half and to three-quarters in 1:27 but faltered in the stretch. Scarlet Dragon (Bob McClure) swept from the back to snag second from pocket-sitter Kinnder Grace (Louis-Philippe Roy) while Reminisce Road held fourth.

ORDC LEG 6
The front still sizzled with Stonebridge Scout (Doug McNair) circling to the lead and leading to every post to a 1:55.3 victory. He overtook the lead from Einhorn (Travis Henry) up the backside and cruised to a :57.3 half and to three-quarters in 1:26.3 before spinning for home and opening on his rivals to win going away. Derby Dylan (Louis-Philippe Roy) pushed first over to take second while Einhorn gave chase in third and Joe Rockhead (James MacDonald) gapped the top three to take fourth off a second-over trip.

ORDC LEG 7
General Lee (Doug McNair) tried to steal the scene, setting a clip of :27.3, :56.2 and 1:25.1 on the lead. But Nates Bucky (Travis Henry) sat the pocket tow through the hot pace, edged wide to attack into the final turn and put away the pacesetter to stop the clock in 1:54.3. Eataams Sportsbaby (Louis-Philippe Roy) rallied from first over to finish second, General Lee settled for third and Alwaysyourway (James MacDonald) finished fourth.

ORDC LEG 8
A pocket ride for Dabunka (Louis-Philippe Roy) paid off when first-over challenger Easy Flyer (Brett MacDonald) dropped out of the mix off the final turn and created a seam for the eventual winner to nab pacesetter Go Mud (Doug McNair) on the line. Go Mud set a steady tempo of :28.1, :58 and 1:26.3 on the point but just missed the victory while Barrys Shelby (Austin Sorrie) closed from second over for third and Tomitta Bayama (Bob McClure) rode the pylons to finish fourth.

ORDC LEG 9
Driver Louis-Philippe Roy sealed the top spot on the standings with a front-stepping victory by Willywin in 1:57.2. Protecting position from the pylon post, Willywin led to a :28.3 first quarter and endured first-over pressure from Run Like Hill (Colin Kelly) into a :59 half and even lost the lead to three-quarters in 1:27.1. But with the inside advantage, Willywin surged back to the lead and kept Run Like Hill at bay while Heavy Dude E (Trevor Henry) finished third and Brydown Houston (Brett MacDonald) finished fourth.