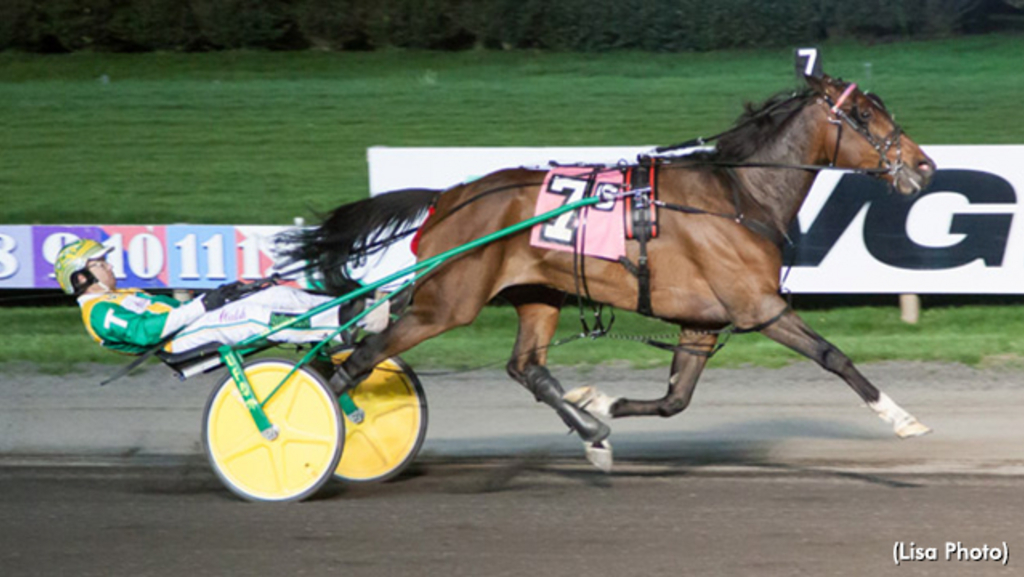 With the roar of monster trucks off in the distance at MetLife Stadium, engines and action were also revving high at The Meadowlands Saturday night (April 23) as season’s-fastest miles were established on both the trot and the pace as wagering topped $3 million for the seventh time in 2022.

In the co-featured $31,500 Open Handicap Trot, Lovedbythemasses got some revenge on Hillexotic, who beat him two weeks ago, by scoring in a speedy 1:51, eclipsing the season’s best he established on March 19 by one-fifth of a second.

Unlike two weeks ago when Hillexotic zipped to the lead after the quarter and went down the road from there as Lovedbythemasses rallied from the back of the pack to get third, driver Tim Tetrick put Lovedbythemasses in play early and made the top just before the half, stopping the clock at that station in a snappy :54.4 before coming home in :56.1 to record a dominant 2-3/4-length win over Yanks Dugout.

The Jeff Cullipher-trained Lovedbythemasses, a five-year-old gelded son of Muscle Mass-Incredibility, returned $4.20 to his backers as the even-money favorite while upping his seasonal stats to five wins from just six starts.

But the speed show had just begun.

The Nancy Takter-trained Red Right Hand, off a blistering speed score at Yonkers on April 4 in 1:51.3, kept rolling in his first Meadowlands appearance since November of last year, ripping away from the gate in a $31,500 Open for four-year-olds on the pace to lead at the quarter in :26.2 before pacing a middle half in a rated :56. That left plenty in the tank for a final quarter explosion of :25.4 to stop the clock in 1:48.1, one tick faster than Sprocket went at Dover Downs on Feb. 10. 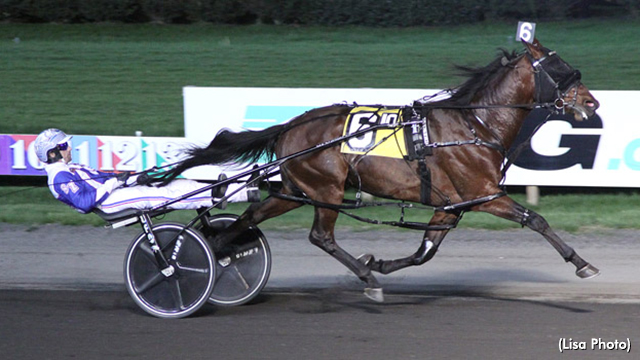 Red Right Hand, a son of Captaintreacherous-Preppy Party Girl who was driven by Scott Zeron, returned $6.00 to win as the 2-1 second choice in the betting. His stablemate, 8-5 public choice One Eight Hundred, finished fourth.

The first dash, for horses and geldings on the pace that went for $12,500, went to Fika Time in a walkover in 1:58. He is a gelded son of Sunfire Blue Chip-Raiders Favorite who is trained and driven by Chase Vandervort.

Mikala took the $12,500 mares pace wire-to-wire in 1:53. The George Brennan-driven, Nik Drennan-trained daughter of Always B Miki-Shes Some Treasure paced her back half in a sensational :53.1 to defeat 2021 Pennsylvania Sire Stakes and James Lynch winner Grace Hill by 1-3/4 lengths.

Ledges tracked the speedy Trixstar from the start until deep stretch before powering past that foe to win an exciting two-horse race for mare trotters, the $30,000 NJBM Final, by a half-length in 1:58. Trained and driven by Harry Landy, Ledges is an offspring of Muscle Hill-Best Of Dreams.

Finally, Sonofamistery, who won a division of the 2021 Stanley Dancer Memorial, took the $40,000 NJBM Final for horses and geldings on the trot. He scored by a half-length from just off the pace over Jula Muscle Pack in 1:53. The son of Muscle Hill-Mistery Woman is trained by Marcus Melander and was driven by Brian Sears.

A LITTLE MORE: Let It Ride N took the $31,500 Open for pacers in 1:48.3 for driver Dexter Dunn and trainer Nifty Norman, avenging a defeat at the hands of Workin Ona Mystery at Dover Downs on March 31. Let It Ride N paid $4.80 as the 7-5 favourite. No Lou Zing finished second while making his debut for the Jenn Bongiorno barn. Working Ona Mystery was third.

There were no winning tickets sold in the 20-cent Pick-6, creating a carryover of $8,353 for the next program. Those with five correct collected $138.12.