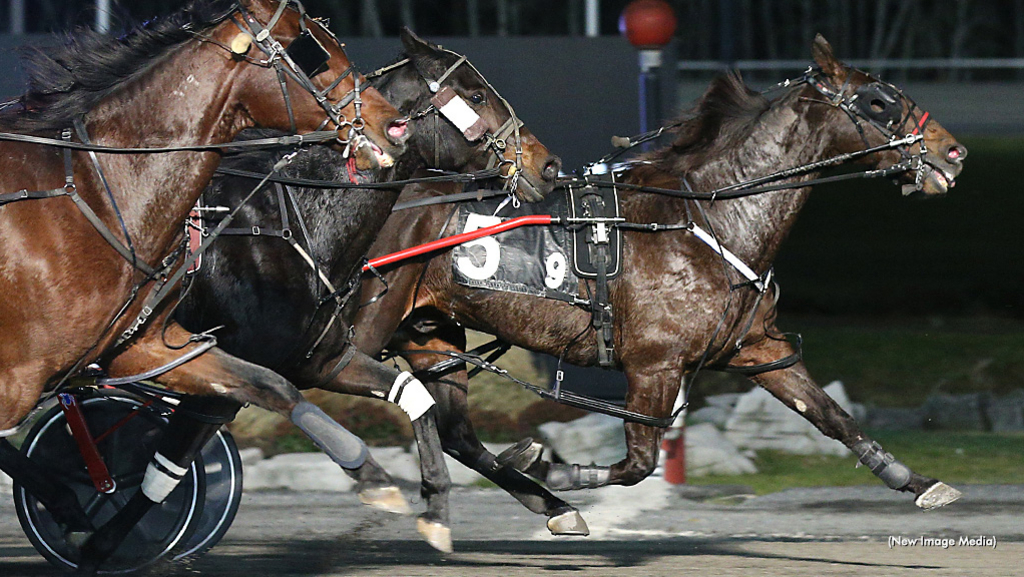 After a year attempting to regain his best stride, the nine-year-old Mach Three gelding Sintra returned to once-familiar territory and took the $30,000 Preferred 2 Pace at Woodbine Mohawk Park on Saturday night (Dec. 3).

Sent off as the 7-5 favourite, Sintra took the lead to a :27.4 first quarter and yielded for a pocket ride when Codename Cigar Box swept to the top before a :56 half. Codename Cigar Box continued towards three-quarters, soon pressed by Carbine and clicked the clock in 1:24.2. That pair spun for home side by side while Sintra rallied out of the pocket and surged to the lead while chased by closers So Much More and Mappos Lion. Sintra hit the finish in 1:52.3, a half length better than So Much More, who nabbed the photo from Mappos Lion. Codename Cigar Box settled for fourth.

Filion also won in the $30,000 Pop-Up Series final, which closed the 10-race card with odds-on choice Arties Ideal. The six-year-old American Ideal stallion circled from the pocket off a :27.3 first quarter and led through middle splits of :56.1 and 1:24.3 before kicking clear and scoring a 3-1/4-length win in 1:53. Millenium Seelster pushed uncovered off the final turn and gave pursuit in second with Outlaw Aceofspades taking third from pocket-sitter Wildriverbumblebee.

Saturday's card also featured a pair of consolations for Pop-Up Series. The Boss Said (1:55.1 winning mile, $5.40 to win) scooted clear and strolled to a 1:55.1 victory by 2-1/2 lengths in the first. Filion drove the three-year-old Huntsville gelding for trainer Richard Moreau and owner Gestion Blais Inc. Rotten Ronnie rolled home to finish second with Giddy Up Max closing for third and Magical Albert settling for fourth.

Petipou (1:54, $8.40) popped pocket to take the other Pop-Up consolation by 2-1/4 lengths. Tyler Jones drove the four-year-old Control The Moment gelding for Dustin Jones, who trains for owner Litwin Racing Team. Hes Got Swagger swept from last to take second with Mission Bay also rallying home for third and Bluemoon Bayama settling for fourth.