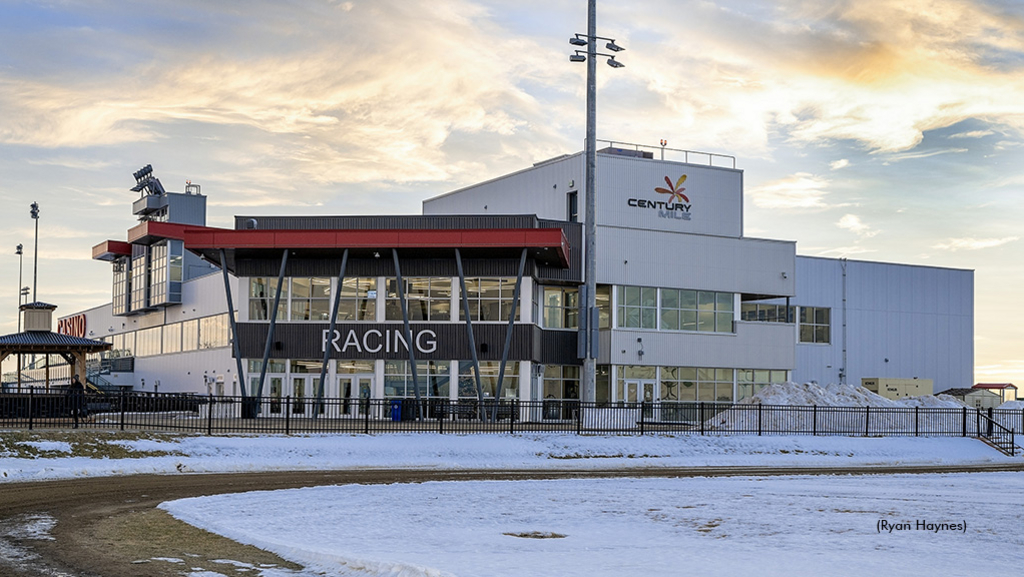 Eliminations for the Western Canada Pacing Derby are set for this Saturday, Nov. 26 at Century Mile. Fourteen of the top three-year-old pacing colts and geldings in Western Canada will face off in a pair of $13,500 eliminations to determine the field for the $110,000 (est.) final, which will be contested on Saturday, Dec. 3.

Redstone Arsenal headlines the first elimination field as the 9-5 morning line favourite for the father-son, trainer-driver team of Rod and Mike Hennessy. The Huntsville-Free Fi Girl colt set a 1:50.3 record as the fastest three-year-old at Fraser Downs on Oct. 12 (and just missed the all-age record) to start a four-race win streak there before heading to Edmonton, Alta. for the Century Mile season opener last Friday. He finished third in his Century Mile debut against older pacers in a race won by last Western Canada Pacing Derby champ Sunshine Boy.

"He won four in a row there and was real powerful doing it," Mike Hennessy told Trot Insider. "But the race last week here, he kind of was a little flat in the lane. He raced fairly quick after being shipped so he might have just been a little worn out. I think he'll be a lot better though Saturday. The other day when he got beat too, he had last year's Derby winner on his back -- a four-year-old -- so I think Saturday night he'll be a little better. He's a big, strong horse and he can carry speed a long way."

Hennessy noted it's not uncommon to see horses needing time to acclimate when they ship from B.C. to Alberta.

"It seems to work better for horses that go from Alberta to B.C. for whatever reasons. Whereas the opposite, they seem to get more tired coming here," he explained. "Maybe it's altitude, maybe it's just dryness and allergies and stuff. And that's part of his thing, he kind of has allergies so that's why we sent him to the coast because it's better out there for that. But yeah, just coming back this way over the mountains seems to tire them out a little more than going the opposite for whatever reason."

Locally-owned by Lorne Duffield, Redstone Arsenal will start from post two in his elimination, just outside of 3-1 second choice Joe Rich, who will be trained and driven by Jamie Gray for B.C. connections Jim Marino, J J J Stables and Paul Sanders.

Alberta Super Final champion Ernesto Delacruz is the 3-2 favourite in the second elimination for trainer/driver J.F. Gagne and will leave from midfield in post four. Unraced as a two-year-old, the homebred Vertical Horizon-Camifasolasi Do gelding was also victorious in the Moore's Mile at Century Downs this past spring and is the richest elimination starter with $169,083 banked from nine wins and 22 starts for Gagne and co-owner Peter Van Seggelen of Heritage Point, Alta. Ernesto Delacruz was a fast-closing second, missing by just a neck to four-year-old pacer Show Stop, in a his prep at Century Mile last Friday.

Owned by trainer Kelly Hoerdt and Blair Corbeil of Beaumont, Atla., Joe Dimagio is the 5-2 second choice from the inside post with Mike Hennessy retaining the mount after guiding the Custard The Dragon-N Y Yankees gelding to victory in the Robert Murphy Memorial B.C. Breeders Stakes final at Fraser Downs last time out on Nov. 6.

"I actually only only ever drove him once," said Hennessy. "I drove him in the Murphy final, the $100,000 stakes out there a few weeks back, and we won it. We came off the pace and I think he'll really like the big lane here. He's got big gears and in the turns he gets a little rolly. I think here he'll be able to kick in a little bit better and he'll have a lot further to gain. He's got some big gears, that horse, I liked him a lot that day.

"Kelly had warned me that he'll get on a line and get a little steppy between turns, but you know, he really wasn't all that bad that day and we just drove through it and we marched homed and we got them."

The Hoerdt stable will have three shots to the make the final also sending out contenders Chuck You Farlie (post four) in the first elimination and Lets Tie One On (post five) in the second. Both colts will be driven by Hoerdt.

The Western Canada Pacing Derby will be co-featured on the Dec. 3 program along with the companion $112,900 Century Casinos Filly Pace. With nine three-year-old fillies entered, including a pair of supplements, eliminations are not necessary. The following is the field for the Filly Pace, listed in alphabetical order: Cozey Up, Daisy Corvette, early favourite Divine Art, Jamaica Move, Katie Lou (supplement), Saphire Blue, Shoot The Whiskey, The Ideal Huntress (supplement) and Tin Foil Hat.

Here is a look at the complete fields for the Western Canada Pacing Derby eliminations in post position order:

Although there are only 7 races on tonight's card at Century Mile, this is definitely the best overall racing program that Century Mile has ever hosted, and probably the best race card ever held in Alberta. Besides 2 eliminations for The WCPD, there are 3 Preferred races, an Open, no claiming races, and only a single race for nonwinners. Kudos to Century Mile's Race Secretary!