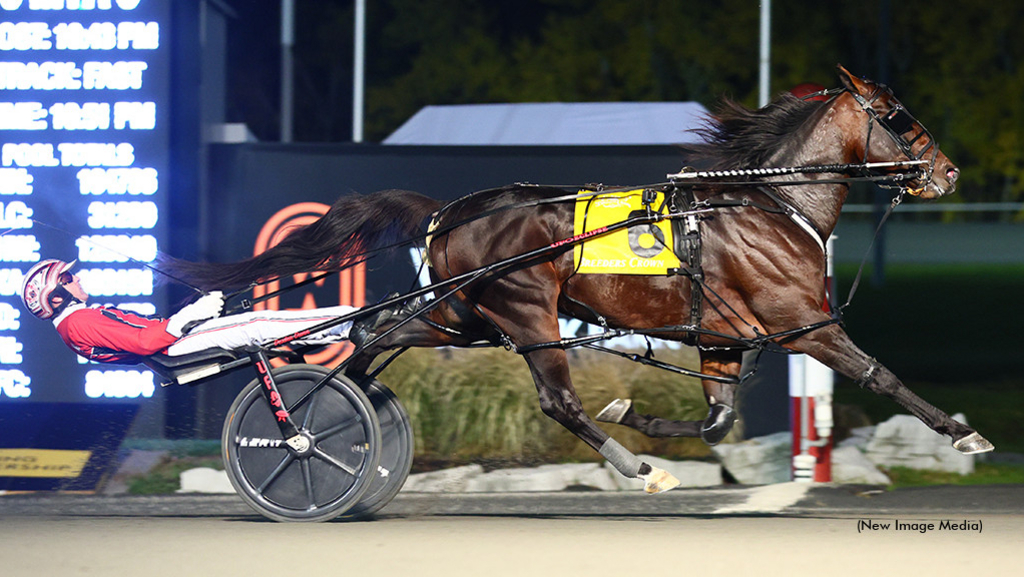 On the eve of his final lifetime start, Seelster Farms along with Jack Darling, Brad Grant and Diamond Creek Farm welcome applications for the 2023 breeding season of Bulldog Hanover as he continues his stallion career in Ontario. After breeding and racing in 2022, the world’s fastest Standardbred ever now has a limited number of shares available to purchase for North American breeders.

Campaigned by Hall of Fame trainer Jack Darling for his entire career, Bulldog Hanover began his early pursuit winning four of six starts at two years of age, including the Ontario Sires Stakes Gold Super Final. At three, Bulldog Hanover continued to impress with three Ontario Sires Stakes Gold leg wins. He stepped into Grand Circuit competition with wins in the Somebeachsomewhere Stakes and the North America Cup elimination and then rounded out his sophomore year with four consecutive wins at Hoosier Park in the Monument Circle, the Star Destroyer Pace, the Circle City Pace and the Thanksgiving Classic, giving all a look at what was to come.

In a 21-day period, Bulldog Hanover won four in a row at The Meadowlands, winning a Graduate leg in 1:47, the Roll With Joe in 1:46, the Graduate final in 1:46.1 and the William R. Haughton Memorial in a world record time of 1:45.4. It was those 21 days from June 25 to July 16 that captured the world’s attention and catapulted Bulldog Hanover to a new status, as he became the fastest pacer of all time.

“From that moment on, he became the people’s favourite, and wherever he raced people from all over came to see, pet, and take a picture with ‘The Bulldog,’” recalled Brad Grant, co-owner of Bulldog Hanover.

Bulldog’s winning streak continued with equally impressive wins against the best in the sport in the Dan Patch, the Canadian Pacing Derby (tying the track record of 1:46.4), the Hoosier Park Pacing Derby and the Dayton Derby. On Oct. 29, Bulldog Hanover captured the Breeders Crown Open Pace in an impressive 1:46.4 (a Breeders Crown record) at Woodbine Mohawk Park. With one final dance on his card tomorrow evening (Nov. 25) at the Meadowlands in the TVG, Bulldog Hanover retires as one of, if not the most impressive competitor anyone has seen, with eight equalling or sub-1:47 wins this season, so far.

“This is a rare opportunity to ensure yourself a place in Standardbred racing history by combining Bulldog’s genetics for speed, endurance and intelligence with your mare’s unique contributions to create what is anticipated to be the next chapter of elite competition in our sport,” remarked Ann Straatman of Seelster Farms, Syndicate Manager of Bulldog Hanover.

Bulldog Hanover’s service fee beginning in 2023 will be $15,000 USD and a limited number of shares are now available for purchase. Shareholders will be entitled to breed one mare per share annually and are also anticipated to partake in a portion of service fee revenue in North America along with all frozen semen sales outside of Canada and the United States. Please contact Seelster Farms for more information at seelsterfarms.com or email [email protected].