Sophomores Slug It Out In Grassroots Semi-Finals 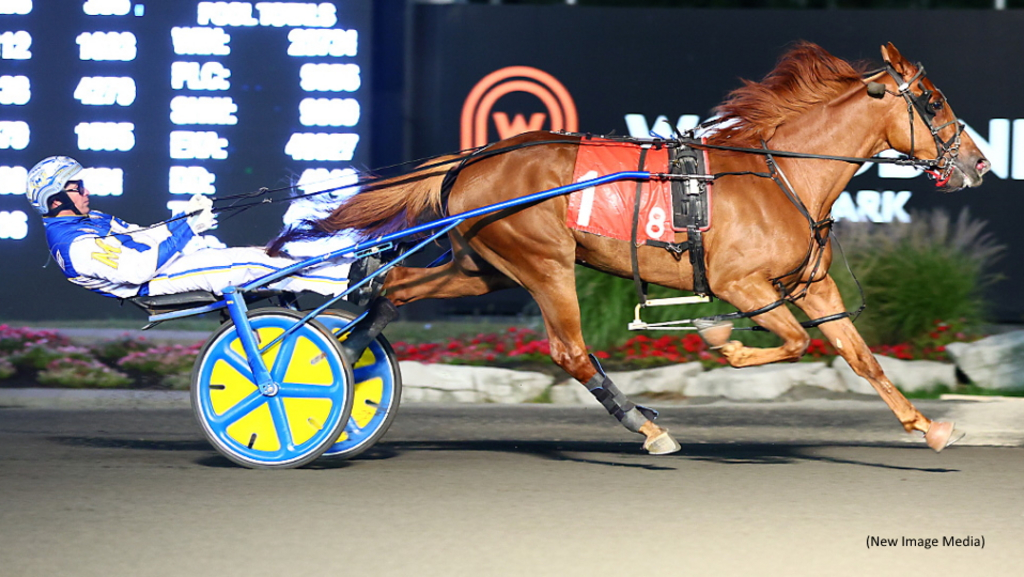 The sophomores had their turn to battle in OSS Grassroots Semi-Final action on Friday evening at after their rookie counterparts did battle just 24 hours earlier.

Eight Semi-Finals were contested over the course of the 12-race card, and here’s a breakdown of what transpired in each of the categories:

Rose Run Xcentric went to the front and didn’t look back in her $20,000 assignment for the duo of driver James MacDonald and trainer Rob Fellows.

MacDonald marched the Kadabra-Drink The Wine filly to the lead from Post 7 and together they led the field through fractions of :27.3, :56.3 and 1:24.4.  A :29.1 closing quarter was enough to earn her the win by three-quarters of a length over Sant Antoine in a career best clocking of 1:54.  Odds-on favourite Stormont Molly had to settle for third prize.

Brookbro Racing and Chris Bell share ownership on the five-time winner who improved her seasonal record to 3-2-0 from 13 starts with the win.  She’s banked over $105,000 to date.

Hang On Baby was heavily favoured in her Semi-Final assignment, and thanks to a solid kick on the end of the mile she was able to get up just in time for driver Sylvain Filion.

The 3-5 favourite got away fifth and held that spot through the first three-quarters of the mile.  Halo Its Heaven (:27.1) and Clockwork Orange (:56.2 and 1:25.3) took turns on the lead, but neither had staying power.  Hang On Baby latched onto final turn cover before uncorking a :27.4 final quarter to win by a half-length margin over Hershey Seelster in 1:54.3.  Stormont Mabel was third.

It was the 10th win of the season for the daughter of Muscle Mass-You And Me Baby who is owned by Ralph and Sandra Pitt of .  The lion’s share of the purse boosted her lifetime earnings to $133,603.

Momentarily was bet off the board in her assignments, and she didn’t disappoint for the tandem of driver Louis-Philippe Roy and trainer Dan Lagace.

After parking to the quarter pole in :27.2, hustled Momentarily to the top and together they went on to slice out middle splits of :55 and 1:22.  A :28.2 closing quarter was used to earn her the neck decision over longshot Girl Scout Cookie in a career best time of 1:50.2.  Delight Bayama rounded out the Trifecta ticket.

The odds-on favourite improved her 2022 record to 5-0-1 from 13 trips to the track for Lagace and partners Ben Mudry, Edwin Buhler and Robert Van Ostrand.  The daughter of Control The Moment-Sun N Moon has banked close to $95,000 in lifetime earnings.

Raptors Won was a big favourite in the other Semi-Final, and she got her nose to the line just in time to fend of a late-driving longshot.

Millar Farms of  bred and owns the daughter of Big Jim-Riveting who has put together a 5-5-0 record from 16 starts.  Unraced as a rookie, the homebred has banked $93,223 to date.

Warrawee Xalt was sent off as the even-money choice in his quest for a third consecutive victory, and he passed the test with flying colours for the team of driver Scott Young and trainer Jeff Gillis.

The son of Royalty For Life-Noble Peace Prize parked past the quarter pole in :27.2 before sweeping up to grab the lead.  Once he cleared, he went on to post middle panels of :56.1 and 1:25.  He then used a :28.4 closing quarter to win by 2-3/4 lengths over Renegade Gypsy in 1:53.4.  Archery Seelster nabbed the show dough.

Gillis and partner Ellen Ott have watched the gelding manufacture a 3-2-1 record from six starts this season.  The $10,000 payday pushed his lifetime earnings to $$41,840.

Resolute Bay pushed his winning streak to four-in-a-row thanks to his decisive score in the second Semi-Final for the duo of driver James MacDonald and trainer Harry Poulton.

The son of Resolve-Tequila Slammer got away fifth while Mr Fritter shot the top and served up fractions of :27.4,: 57.3 and 1:26.2.  commenced a first-over rally on the way to the half, and he was knocking on the door while riding second on the outside at the three-quarter pole.  He kicked home in :27.3 and that was enough to earn him the win by 1-3/4 lengths over Kipper Whipr Snipr in 1:54.1.  Lenis was third.

Thestable Resolute Bay of Guelph, Ont. owns the streaking sophomore who now owns a 5-1-3 record from 16 trips to the track this season.  The six-time winner has banked $83,749 to date.

Kobra Kai extended his winning streak to four-in-a-row thanks to a 1:52.4 triumph in his assignment for driver James MacDonald and trainer Rob Fellows.

The son of Shanghai Phil-Fanciful got away fourth before quarter pole-moving to the top in the backstretch.  He was on the hook for middle fractions of :55.3 and 1:24.2, and he tacked on a :28.2 closing kick which earned him the win by a head over Stop The Shootin.  Coligny was fourth-placed-third in the nine-horse affair.

Dreamfair Arnie B was yet another popular winner to find his way to victory lane, and in doing so he registered his sixth win of the season.

Travis Cullen got away third with the Jodie Cullen trainee while Persistant Boy and Chucky Hanover battled to the quarter pole in :27.3.  Chucky worked his way to the top, but he then gave way to Dreamfair Arnie B who came calling on the way to the half.  Dreamfair Arnie B carved out middle splits of :56 and 1:24 before using a :26.3 kicker to win by a length over Chucky Hanover in 1:50.3.  Jabberwocky took home the show dough.

John Lamers of Mount Brydges, Ont. bred and owns the son of Sportswriter-Dreamfair Eternal.  The win improved his 2022 record to 6-3-1 from 16 starts and it lifted his lifetime earnings to $86,073.

Jody Jamieson mapped out the winning trip for the four-year-old daughter of -No Strikes Against who is owned by Hudson Standrdbrd Stb Inc and Bertrand Gilhespy Stable.  It was her fifth win of the year and the ninth of her career.  She’s now just shy of $200,000 in career earnings.