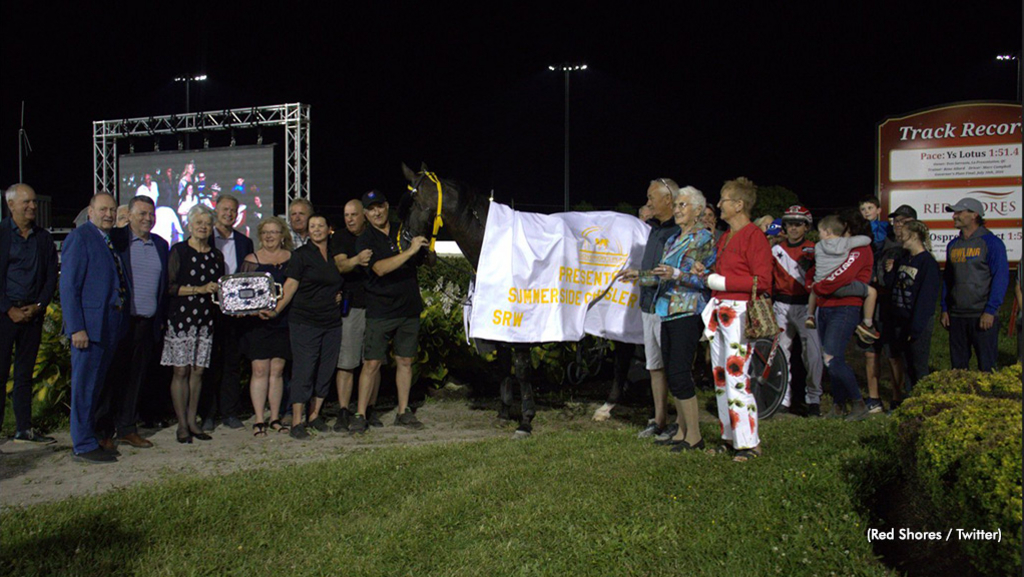 Even-money favourite No Plan Intended landed a dreamy position from which he capitalized to win the $30,000 Governor's Plate at Summerside Raceway on Saturday night (July 16).

Island Beach Boy bolted for the lead while No Plan Intended also shot off the wings but secured the pocket before a break by pylon-starter Twin B Tuffenuff scattered the field toward a :27.1 first quarter. Bugsy Maguire, impeded by the break, regained his footing but raced parked from midfield while Island Beach Boy strolled to a :55.1 half and stayed on the pedal to three-quarters in 1:22.4.

No Plan Intended remained the pacesetter's closest pursuer with the rest of the field trying to give pursuit. And those quick fractions proved taxing on Island Beach Boy as No Plan Intended loomed out of the pocket spinning for home and slid away to a 1-3/4-length victory in 1:52.1. Island Beach Boy settled for second, Rotten Ronnie finished third another six lengths back just ahead of Time To Dance.

Carl Jamieson and Brian Paquet own No Plan Intended, who won his eighth race from 23 starts this season and his 16th from 46 overall and pushed his earnings to $215,309. David Dowling drove the $4 winner for trainer Colin Johnson.

Merito Hanover pulled an upset as the longest shot on the board in the $7,500 Bob Dewar Memorial Governor's Plate Consolation. The four-year-old Bettors Delight gelding sat a stalking trip from fourth and lifted coming for home to post a two-length win in 1:53.2 over fast-closing American Risk. Jason Hughes drove the $25.50 winner for owner Perry Burke and trainer Trevor Hicken. The win was the sixth from 24 starts for Merito Hanover, who has now earned $62,130.

Pacing glamour boys also contested in a pair of $16,780 Atlantic Sires Stakes "A" divisions. Fern Hill Gusto, in rein to trainer Marc Campbell, went coast to coast through fractions of :27.2, :56.3 and 1:26 to win a 1:55 mile by 4-1/4 lengths in the first division. Grayland Farm owns the Stonebridge Terror colt, who won his fifth race from 16 starts and has now earned $44,726. Woodmere Denver overtook pocket-sitter JJ Xavier to finish second with the disqualification of third-place finisher Soul Assassin, who was placed eighth for interference heading to the half.

Alldawaytocardigan lighted the board at 14-1 in the other A division. Leaving from post eight, the Tobago Cays gelding sat 15 lengths off pacesetter Stash It Away to a :27.3 quarter but made steady progress to a :57.3 half before swooping first over to three-quarters in 1:27.2. He then dug into Stash It Away through the stretch to slide 1-1/2 lengths in front to win in 1:56.2. Jackie Heffernan owns the winner of $48,406 and Myles Heffernan Sr. drove for trainer Myles Heffernan Jr. In paying $31.40 to win, Alldawaytocardigan scored his fifth victory from eight starts this season and his sixth from 21 starts overall.

Marc Campbell had four wins on the night while Barrieau made three trips to the winner’s circle for the pair to end the night tied for the Basil Whelan Memorial Award for top driver of Governor’s Plate Week.